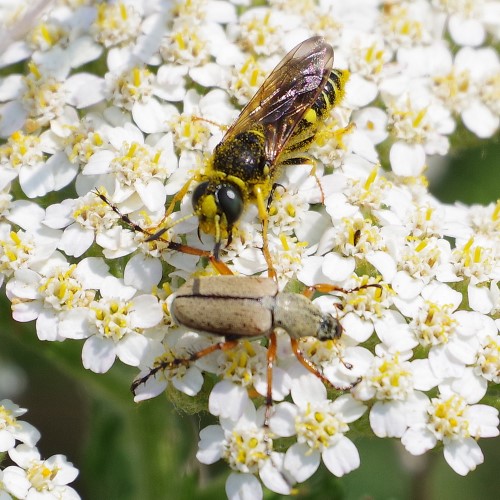 Ever since she read about beewolves years ago, the BugLady has been hoping to photograph one so she could tell its story. She finally found one in the dunes at Kohler-Andrae State Park, and no – the Rose chafer beetle in the picture has nothing to fear from it, and vice versa.

Beewolves are small, solitary, mostly black wasps in the family Crabronidae, which we have met before in the person of Square-headed and Sand wasps. Our beewolf species look a lot alike (and they resemble a lot of other small, solitary wasps, too), but the BugLady thinks that this is a Sanborn’s beewolf (Philanthus sanbornii). They’re ½” to ¾” long (females are larger than males). Here’s a glamour shot.

Their common name, beewolf, describes what they do, and their genus name, Philanthus, from the Greek for “lover of flowers,” describes where they do it. They’re also called digger wasps, bee-hunters, and bee-killer wasps. There are about 140 species of beewolves spread across North America (32 species), Europe, and Northern Africa, and the European beewolf (Philanthus triangulum), a honeybee specialist, is probably the most famous/most studied.

The natural history of Sanborn’s beewolf is, with a few tweaks, similar to that of many solitary wasps – the female digs a tunnel with separate chambers for each egg. She stashes paralyzed prey in each, and when each cache meets with her approval, she lays an egg in it, seals the chamber, and closes the tunnel. The eggs hatch; the larvae eat the still-living bees left by Mom (beewolf Moms leave another gift as well – more about that in a sec), and emerge the following spring. Adults are nectar-feeders and are good pollinators.

Let’s flesh that out a little for beewolves in general and Sanborn’s beewolf in particular.

Males emerge from the nest tunnels in late spring/early summer a few days before females. They mark territories by depositing on twigs some pheromones made in their mandibular glands, and these pheromones both attract females and warn other males of the territorial boundaries. Territories are about food and generally contain attractive nectar or honeydew sources. After they mate, the female Sanborn’s beewolf digs a tunnel up to 10 inches long (she likes packed sand, which is probably why the BugLady found her in the dunes) and starts provisioning it. Here’s a nice series showing her at work. Males dig shallow burrows to spend the night in.

About Philanthus genus members, Heather Holm, in her massive and brilliantly-illustrated book Wasps, tells us that, “Many Philanthus females excavate accessory burrows near the real nest burrow entrance. These burrows may play a role in distracting natural enemies such as bee flies (family Bombyliidae) or satellite flies (family Miltogramminae) because they remain open while the real nest burrow is closed when the female is away from the nest.” The BugLady saw a number of bee flies along the trail that day – a future BOTW if she can only ID them. 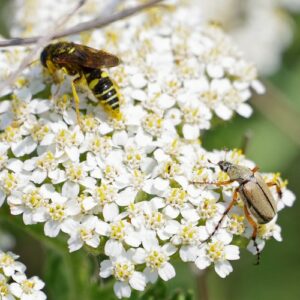 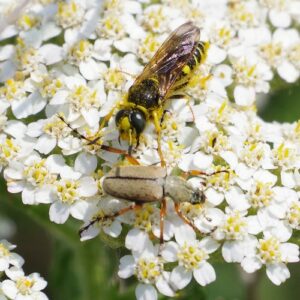 She visits a flower, and according to Holm, if she sees an appropriately-sized bee on it, she “hovers downwind to detect the prey’s scent for confirmation, then returns to the flower to capture and sting the prey.” She apparently judges the readiness of each nest chamber by bulk – packing in larger numbers of small prey and smaller numbers of large prey, and Holm says that a female makes only one nest tunnel in her lifetime.

Sanborn’s beewolves are larger than the average beewolf and so can pursue larger prey. They are generalists – almost everything is fair game as long as they can subdue and carry it, and they don’t play favorites. Menu items include more than 100 different species of bees and small wasps including honey bees, long-horned, mining, leafcutter, and sweat bees, and fellow crabonids. Beewolves deliver venomous stings, aiming for the underside of their prey’s thorax, between the legs, and they grip their prey so that if it tries to sting back, it can only reach an armored section of beewolf.

Beewolves spend a lot of down-time. The egg is laid near the top of the pile of paralyzed bees; the larva emerges from the egg by mid-summer and consumes the food cache, makes a cocoon, and goes into a prepupal stage within its cell. It doesn’t pupate until the next spring/early summer shortly before it is scheduled to emerge for its short (a little more than a month) adult life.

Beewolves have developed a very cool way to boost the fitness/survival/success of their offspring. Along with fresh meat, the female beewolf leaves for her offspring what one source calls a bacterial birthday present. Female beewolves cultivate in the base of their antennae a white paste that contains Streptomyces. Streptomyces is a large genus of bacteria that’s used (by us) in the production of antibiotic, antifungal, anti-parasitic, and immunosuppressant drugs (think neomycin and streptomycin, among others). The bacteria associated with beewolves has been named Candidatus Streptomyces philanthi’.

What does she do with it? She leaves some in each brood cell, and the larvae find it and incorporate it into their cocoons. Brood chambers are warm and dark and moist – perfect petri dishes for a variety of soil microbes that might infect a larva or pupa. Candidatus Streptomyces philanthi’ produces at least nine different antibiotics that protect against bacterial and fungal infections (researchers Seipke, Kaltenpoth and Hutchings call it a “multi-drug therapy”). Scroll down to the great video. After this phenomenon was discovered in beewolves, it was found in two species of mud dauber wasps – this may be a “tip-of-the-iceberg” moment.

Want a deep dive into the world of Streptomyces? Here’s an article.

(So – Bee wolf, not Beowulf) (the BugLady has been waiting so long to say that) (maybe not long enough?)