The summer of 2018 saw an encouraging number of sightings of Rusty-patched bumble bees in southeastern Wisconsin – encouraging because the Rusty-patched bumble bee is on the Federal Endangered Species list, and also because there seem to be a growing number of people who are aware of the bee and are looking for it. Once found in a wedge that stretched from the Upper Midwest to Ontario to North Carolina, most of its present population is found from Minnesota to Indiana. It is also listed as Endangered in Wisconsin, and its conservation ranking is S1/G1 – critically imperiled in the state, and critically imperiled globally. Most Wisconsin sightings are in the southern half of the state. 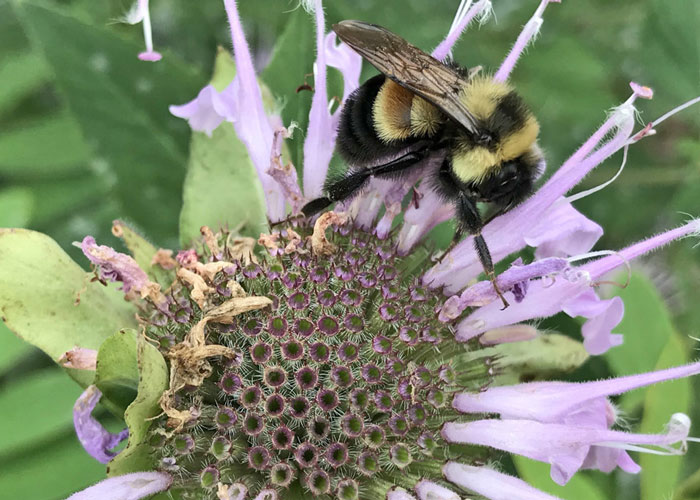 We depend on bumble bees for a variety of ecosystem services, and they are considered by some to be a “keystone species” – a species that shapes the ecosystem it lives in, and without which that ecosystem would be drastically different.

Here’s its pedigree: Rusty-patched bumble bees (Bombus affinis) are in the family Apidae, the Cuckoo, Carpenter, Digger, Bumble, Honeybee family, in the subfamily Apinae, the Honey, Bumble, Long-horned, Orchard, Digger bees, and in the Bumble bee tribe Bombini (and yes, Bumble bee is officially two words, not one. Mea culpa). 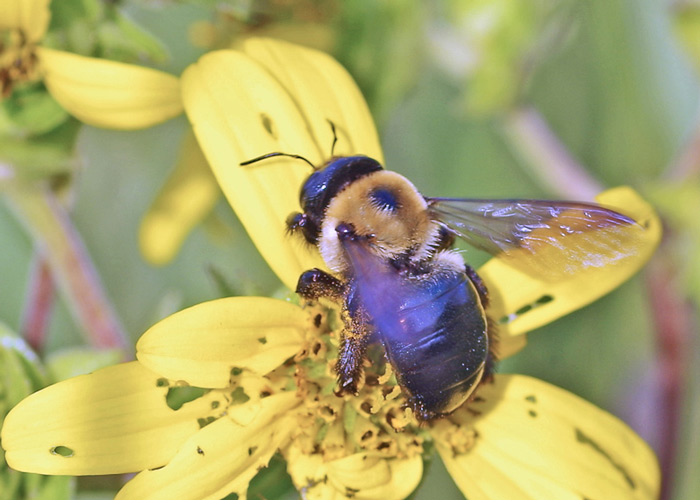 Bumble bees can be tricky to ID – queens, female workers, and males come in different sizes and patterns (the “bumble bees” with the shiny, bald abdomens are really Carpenter bees (pictured above), but it often takes the BugLady a sec to remember that). Click the “identification” tab for a drop down of similar species. The BugLady highly recommends this guide, which comes in a paper version and/or is downloadable. RPBBs are moderate-sized bumble bees with all-black heads and short-ish hairs that are not as shaggy as those of some other bumble bees, and the queen doesn’t have a rusty patch. The BugLady is including with this story some pictures of a few other bumble bees with reddish markings on their abdomens (all ID corrections gratefully received).

This is primarily a grassland bee that needs three habitats – a succession of wildflowers and shrubs to glean nectar and pollen from throughout its long flight period (they’re often pictured on wild bergamot, and here’s one that’s feeding in spring on an orange that was put out for orioles), plus nesting sites, plus places for a queen to overwinter – all in close proximity.

RPBBs are one of the first bumble bee species to appear in spring and one of the last to tuck in for the winter – the large bumble bees we see foraging in spring are the queens, who get the nest and first brood “off the ground” single-handedly. Like honey bees, they are very social, but unlike honeybees, their nests have fewer workers (usually between 50 and 500) and are not maintained through the winter. Queens mate in fall, burrow into loose soil, rotting logs or compost heaps to overwinter, and emerge in spring to locate a suitable site for a nest (she may use an old rodent burrow or a thicket of grasses above-ground). After the infertile, female workers hatch, the queen concentrates on laying eggs, and the workers take over maintenance, defense, foraging, and care of the nursery. Males and future queens are produced in late summer, and the queen dies before her colony does.

The big story around the RPBB is its population nosedive. Very common historically, its numbers have dropped by a stunning 90% since the late 1990’s (other species of bumble bee are also in decline). Loss of grassland habitat and changing land use patterns are big factors, along with pesticides (applied both on the ground and on flowers), climate change, and disease.

With the recognition of bumble bees’ very important role as pollinators (they’re the most efficient pollinators for some important agricultural crops) came the commercialization of those services. Managed/commercial bumble bee colonies sometimes contain high levels of parasites and pathogens that are spread to wild populations as the bees forage. One theory about the RPBB’s decline involves a fungus that invades the bee’s gut and causes swelling so significant that males become “too fat” to bend their abdomen and mate. 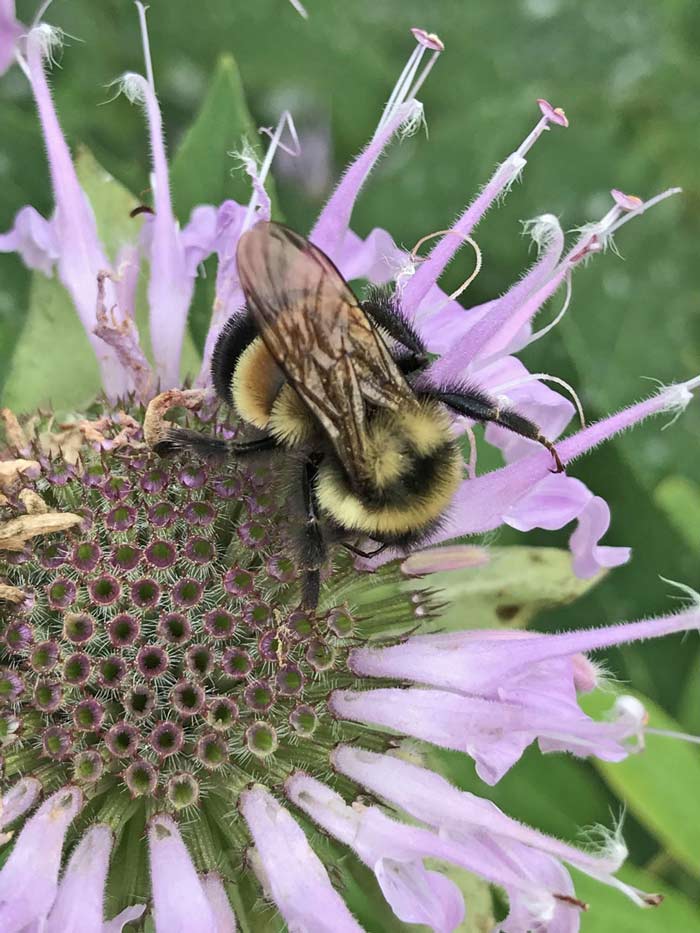 SCENIC SIDE TRIP: There is a story within the bumble bee story. A group of bumble bees called Cuckoo bumble bees, also (presently) in the genus Bombus, make their living as bumble bee parasites. Not blood-sucking parasites, but “social parasites” that, like Brown-headed Cowbirds and Old World Cuckoos, leave their eggs in the nests of other bumble bees for the host bees to raise. Each species of CBB targets its own set of bumble bees.

CBBs have some fascinating adaptations that allow them do what they do. They have no social structure, just free-living females and males, and all the females are fertile. Because they don’t support a nest, they have no pollen baskets; and because they don’t exude wax from between their abdominal segments, their body is more “armored” or solid. They also have longer stingers and stronger mandibles, all of which serve them well in a dust-up with the resident bees. CBBs emerge later in the season than their targets, allowing the host species’ colony to be well-established before they come calling.

A CBB finds her host’s nest by smell, but what happens next may vary. Some accounts of their MOs describe a forcible takeover of the nest, in which the CBB kills the colony queen outright; others depict a more passive scene, in which the CBB settles into the host’s nest for a few days until she’s picked up the nest’s unique scent and can move about laying her eggs without challenge. And there are also accounts of RPBBs eating “foreign” eggs and evicting CBB larvae or adults.

The Ashton cuckoo bumble bee (Bombus ashtoni) parasitizes the RPBB and two other species. Because it has put all its eggs in one basket – it has no child care experience and so can’t live without its hosts – its populations are also declining and it’s listed as rare. Click here to learn more about CBBs.

FOR MORE INFORMATION – there’s ton information about RPBBs, pollinator associations, and citizen science opportunities out there. Here’s a start:

Thanks to sharp-eyed BugFan Becca for her RPBB pictures, taken in her own back yard.
The BugLady