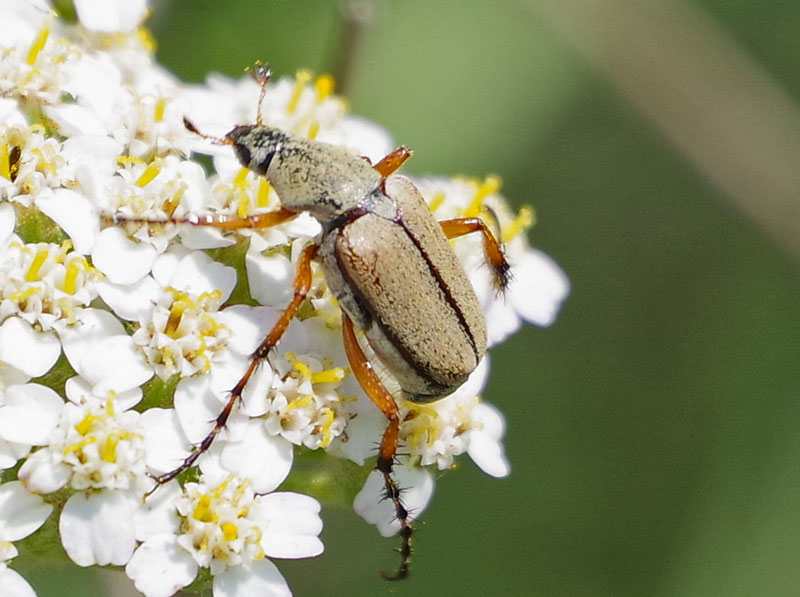 The BugLady was surprised, as she trekked across the dunes at Kohler-Andrae State Park one steamy day in early July, to find this small, gangly beetle hanging out on some yarrow flowers. The cut of its jib was familiar – the beetle’s legs reminded her of the clingy legs of a June bug. It turned out to be a Rose Chafer (Macrodactylus subspinosus), which is in the Scarab beetle family (Scarabaeidae) and in the same subfamily as the June beetle. It’s called “chafer” because it chafes at the tops of petals and leaves of rose plants (among others); “Macrodactylus” means “big fingers,” a nod to the long tarsal claws. 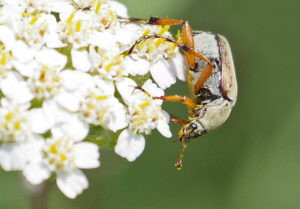 Rose chafers can be found in grasslands, gardens, and viney edges over much of eastern North America as far west as Colorado and Montana, although distribution gets spotty the farther South you get. They especially like sandy areas (more about that in a sec). Bugguide.net considers the western records to be “iffy” because of the possibility of confusing the Rose chafer with one of the other two species in the genus Macrodactylus that live north of Mexico, but insects can find an infinite number of ways to hitchhike. (https://bugguide.net/node/view/939033/bgpage, and https://bugguide.net/node/view/1253988/bgimage)

They’re about a half-inch long (females are bulkier than males), covered with yellow hairs that rub off with age (or in the case of the female, with mating), exposing the dark cuticle beneath. The official name for their antennae is “lamellate,” which means “plate or leaf-like.” The legs are spiny and the feet/tarsi are clawed (all the better to hang on with, my dear).  Several sources said that the beetles may resemble a wasp while in flight (maybe because of the dangling legs?). 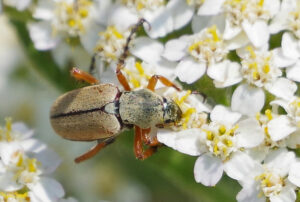 The BugLady does not garden. She puts her geraniums out on the porch in May, waters them when she thinks of it (they’re very patient), and hauls them back in at the end of October, at around midnight as the first killing frost is descending, and she wouldn’t know what to do with a rose bush if she had one. Rose chafer beetles feed on the leaves and flowers and maybe the nectar and pollen of lots of different kinds of plants. Their jaws are weak, so they eat the tender tissue between the leaf veins, skeletonizing the leaf; they make holes in petals; and they eat soft fruits like raspberries and grapes.

Some sources say that the beetle is only a slight nuisance, doing mainly cosmetic damage; others give instructions for all-out warfare. Their populations wax and wane, and when there’s a Rose chafer population boom, the beetles may consume a substantial portion of a leaf’s photosynthetic surface and may also impair pollination. Plus, they may feed in groups. Interestingly, the North Carolina State Extension write-up about Rose chafers calls them a “relatively minor pest of roses that at one time was apparently much more abundant.”

With many insect “pests,” it’s the larvae that do the most damage, but with the chafers, it’s the adults who are the problem. Rose chafer larvae feed underground on the roots of grasses and other plants, and although a bumper crop of larvae can stunt a plant, they don’t seem to be a real threat to turfgrass or ornamentals.

Rose chafers can be seen during June and July here in the North. The plants that they feed on also serve as Social Clubs where males and females meet and mingle. When this “What’s going on here?” picture was posted on bugguide.net, entomologist Eric Eaton responded “I don’t think they are ‘eating’ the milkweed. This kind of aggregation is usually associated with mating or “sleeping.” This seems to be another example of insects chewing on plants; plants releasing volatile compounds to discourage that; and those compounds, perversely, attracting a crowd. The Rose chafers use their antennae to key in on those plant “odors.”

The female oviposits in the soil, digging down as far as six inches below the surface (!!!), which is why she prefers plants that grow in sandy soil. She may lay from six to forty eggs, and when they hatch in a few weeks, the larvae locate roots to feed on. They will move up and down in the soil, depending on soil moisture and soil temperature, and they will overwinter deep in the ground, below the frost line, moving up toward the surface to pupate when the earth warms in spring.

Many of the scarabs are nocturnal, but Rose chafers are abroad during the day. They are strong fliers.

Rose Chafer Surprise: Rose chafers produce cantharidin, a caustic chemical mainly found in beetles in the blister beetle family Meloidae! Although the author of one gardening blog noted that he had been picking them off of plants for decades with no ill effects (the skin on our fingers is pretty tough), he joined the chorus of authors who stressed that the beetles are poisonous to chickens and other birds.

In his “Living with Insects” blog, entomologist Jonathan Neal explains “Their toxicity to chickens led to one of the early scientific studies of toxins in insects. In 1909, George Lamson, Jr, of the Connecticut Agricultural Experiment Station investigated reports of a flock of chickens that died after feeding on the abundant Rose Chafers. Lamson fed Rose Chafers to chickens and determined the numbers required to kill week-old (15-20 Chafers) and 3-week-old chickens (25-45 Chafers). In the early 1900s, chickens were commonly allowed to range free and could easily consume large numbers of Rose Chafers in years with high populations. Lamson recommended that chickens be excluded from areas that contained large numbers of Rose Chafers. Lamson made an extract of Chafers and demonstrated that the extract was toxic to both chickens and rabbits. These tests proved that the deaths were due to a chemical toxin and not a physical effect from the insect spines or other physical properties. Lamson reported his findings in the Journal “Science” in 1916.”