In most BOTWs, mention of the insect’s range is a one-liner, but for the non-native Roesel’s katydid, range is the story. We’ll get to it in a minute.

First, the pedigree. Roesel’s katydid (Metrioptera roeselii) is in the Katydid family Tettigoniidae) and in the Shield-backed katydid subfamily Tettigoniinae. Shield-backed katydids are called bush-crickets in their native Europe, where, because of their penchant for biting when handled, they’ve earned the name “wart-biters.” The most infamous member of the subfamily is the flightless Mormon cricket (not a true cricket) that threatened to eat its way through Utah in biblical numbers in 1848. 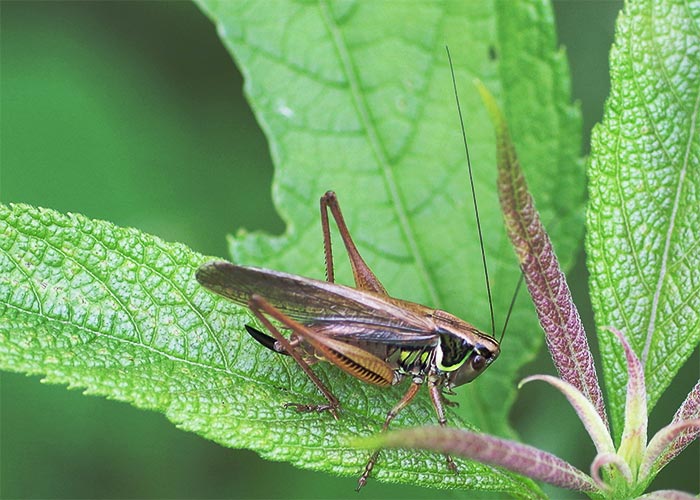 Shield-backs are (typically) drab katydids that resemble stocky grasshoppers with longish antennae. Many species (including the “true shield-backs,” also pictured here) have wings that are greatly reduced in size and so are flightless, but some species occur in two forms—long-winged (macropterous) and the more-common short-winged (brachypterous), both of which can fly. The up-turned appendage at the rear of this specimen is the ovipositor, marking her as a (macropterous) female. 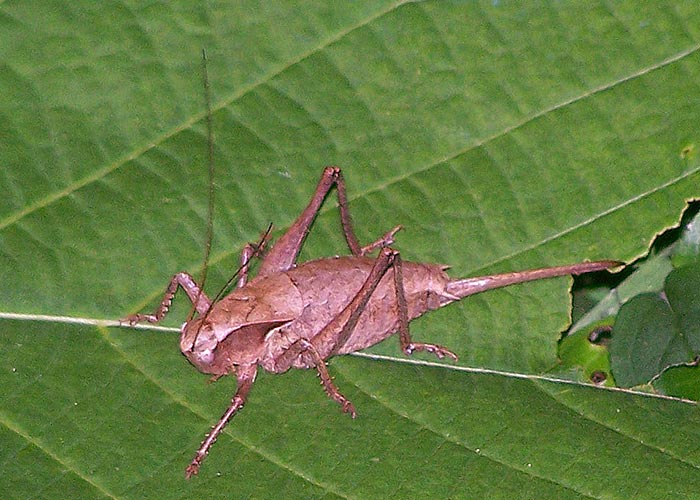 Their habitat is generally described as un-grazed fields/field borders/road edges/etc. with taller grass (in other words, not active cropland). In short or grazed grass, the RK is more visible to predators, and taller vegetation also traps the humidity that they are fond of. They are most successful in grasslands that are left undisturbed long enough for their eggs to hatch.

These are vocal insects, albeit at a pitch and volume that may be hard for some ears to hear. The males’ call, produced by stridulation/friction, is described as a high-pitched, quavering buzz, similar to the hiss of overhead electric lines. Males call to females on summer days and evenings from perches in the vegetation. The acoustics improve as you climb up out of the dense vegetation that lies near the ground, and stridulation is more vigorous in warmer temperatures.

A female uses that impressive ovipositor to slice into plant stems so she can deposit egg pods within. The nymphs emerge in May and, after molting five or six times, mature into adults by mid-July (they develop via “incomplete” or “simple” metamorphosis—no resting-changing cocoon, just a gradual growth, with the addition of wings and some adult body parts). There is only one generation per year.

A non-native katydid (nothing surprises the BugLady since she learned that we have non-native daddy long-legs)! Their natal turf is southern and central Europe and Great Britain, and even within that area, they are still expanding their range. RKs arrived in Montreal in 1953-ish. Most discussions of its progress across America say that it is well established in eastern Canada and the northeastern U.S. and that there’s a disjunct population, an island of RKs, in northern Illinois.

In Europe, where the RK is much-studied, macropterous individuals normally make up about 1% of RK populations; not surprisingly, the macropterous forms tend to travel greater distances than their short-winged brethren. The percentage goes up when a population is feeling crowded. Summer weather seems to be a key—if it is hot, and the RKs feed well, they also breed well, and the next year’s abundant crop of RKs will feel crowded. They, in turn, will lay eggs that produce more long-winged offspring that will, when they mature in the next summer, fly off and relieve the crowding, whatever the weather. Our current “Global Weirdness” might be just what the doctor ordered to stimulate species expansion. The long-winged form seems to be more common in North America than in Europe, a phenomenon that reflects its active colonization of the New World, where it seems to be about half way between sea and shining sea. Winged flight doesn’t account for all of its movements, though; eggs may travel in the stems of agricultural products that are shipped around the country (human mediated dispersal).

This state of affairs has motivated some passionate blogging about the RK’s adventures in America. The main points?

A former President once nominated for the job of Secretary of the Interior a man whose “take” on the subject of invasive species was “We may have lost some native species, but overall, we’ve gained more ‘new’ species than we’ve lost. The scale is tipped in favor of biodiversity; what’s the fuss?”