Some of the larger species of Robber fly are out and about these days, rising up from the tall grass with an annoyed buzz as the BugLady passes. Flies with “attitude.” The BugLady has nibbled at the topic of Robber flies (order Diptera, “two-wings”, family Asilidae), mentioning them briefly in a number of “group” BOTWs over the past five years, most recently with a report of an RF chasing a mid-sized dragonfly across a clearing. They are fascinating flies that come in a wide variety of flavors, and they have lots of serious fans, websites and photo pages. Deservedly so—the larger species are pretty impressive critters (and the BugLady is a big fan of carnivores).

Robber flies occur world-wide (except Antarctica), and although their diversity is greatest in warm, tropical/sub-tropical/semi-arid regions, they can survive north to the tundra. There are about 7,000 species total, just over 1,000 of which are found in North America, and according to Gary Dunn in Insects of the Great Lakes Region, about 100 species in the Great Lakes states and contiguous Canada. They’ve been around since the Eocene epoch (50 million years, give or take). As a group, RFs are sun lovers that occupy open habitats, woody edges and forest glades. They tend to be active during the hottest parts of the day and to shelter in the vegetation at night (although one summer, the BugLady had an RF that worked the field under the yard light until well after dark).

Their appearance and lifestyles have earned them a bunch of common names–Bearded robber flies (awesome facial hair!), Hanging thieves (some dangle from vegetation), Bee killers, Bee wolves (there’s a group of wasps by that name, too), and Assassin flies. RF appearance varies widely from small-and-roundish to small-and-slim to bumblebee-mimics to large-and-slim (almost dragonfly-like). Some of the smaller species have impossible, angular back legs. What they all have in common is two, large, compound eyes with a big dent between them, a beard (mystax) (from the Greek for upper lip or moustache), and legs with bristles (macrochaetae) that allow RFs to catch and hold their prey in flight. They range from ¼” to 1 ¼+” in length. Check out the various RF incarnations at Mike Reese’s Butterflies of Wisconsin site.

They feed on other insects and are applauded as biological controls, although they do not discriminate between the species we love and those we call pests (the asktheexterminator website gives them a big “thumbs-up” and suggests watching, but not handling them—more about that later). Generic fly mouthparts are designed for piercing, lapping, or sucking fluids, not for chewing, so in order to feed, an RF must convert its food source from solid to liquid. RFs perch and watch for the glitter of wings in the air. They fly out, grab their prey with those bristly legs, and inject a mixture of neurotoxins (to immobilize) and enzymes (to tenderize), and then return to their perch, prey in hand, to wait until its innards are properly softened. They sometimes take sitting prey, like spiders.

RFs tend to be opportunistic predators that feed on butterflies, moths, dragon and damselflies, grasshoppers, true bugs up to the size of cicadas, bees and wasps (the mystax apparently protects them from prey that tries to bite or sting them), and even other RFs. The diversity of prey depends on an RF’s size—the bigger the RF, the longer its list of available food items—and they routinely tackle insects that are larger than they are. The BugLady read one source that said that the proboscis is strong enough to penetrate the elytra of some beetles, but Dunn, in Insects of the Great Lakes Region, notes that beetles are captured on the wing, with their elytra spread, which gives the RF quick access to the beetle’s more tender parts. They do not seem to be deterred by the repugnatorial chemicals produced by bad-tasting or toxic prey.

The BugLady found an amazing account at the excellent Hilton Pond website about a large RF and a Ruby-throated Hummingbird. Go to hiltonpod.org and scroll down about half way; the story starts one paragraph after the picture of the two people.

To the inevitable “Do they bite?” the answer is a resounding “Yes!” NOT to get a blood meal, like mosquitoes, but to defend themselves from who/whatever tries to handle them. One of the Hilton Pond crew, in an attempt to see what the hummingbird had been up against, allowed a large RF to bite her and wrote “The Robber Fly packs a wallop. I have a small hole in the pad of my middle finger, which has swollen, become red, and hurts. The Robber Fly also wrapped its legs around my finger as it jabbed me—much like it had held the hummer.”

The pale and legless RF larvae, denizens of soil and rotting logs, are seldom seen and not thoroughly studied. They have historically been assumed to be carnivores, dining on small soil creatures (including the pesky “white grubs”) and on the eggs of other insects, and being dined upon in turn by larger soil critters. But, research from the early 1900’s suggested that some larvae eat meat when veggies are in short supply, and others wonder if the larvae of some groups may change diets between the start and end of their larval stage, starting as ectoparasites (feeding on a host from the outside) and ending up as predators.

RF courtship is minimal and more resembles hunting activity (when the BugLady sees the fierce-looking Promachus pairs perched in the grass, she hears Star Trek’s Mr. Worf saying, “This is the way a Klingon takes a mate.”). Eggs are deposited on plants, wood or in soil (an exceedingly friendly RF buzzed in and oviposited in the BugLady’s hat brim recently) and the female may coat them with a protective cover. They hatch and the larvae drop to the ground (or remain in rotting wood), where they may stay for one to several years, eventually pupating in the soil. 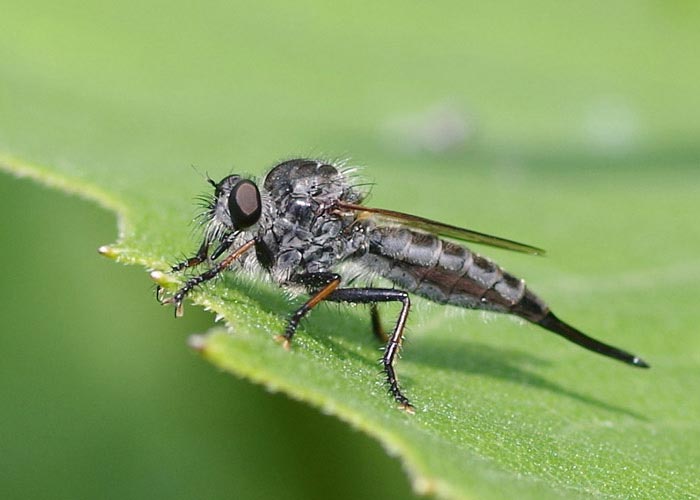 A number of species of RFs can thermoregulate (thermoregulation helps an insect get going on cold days and keeps it from overheating on warm ones). There are two methods to accomplish this. Using behavioral thermoregulation, an RF gets a jump-start in cool weather by sitting on sun-warmed surfaces or basking with its body orientated maximally to the sun; or it sits where air can circulate all around to cool down. Biologist Bernd Heinrich also documented physiological thermoregulation in some species in the genera Promachus and Efferia. An extra-large dorsal aorta allows them to dump excess thoracic heat into the abdomen, which has a larger surface area to disperse it (it gets warm in the thorax because of the action of wing and leg muscles).

Hats off to the Galveston County Master Gardeners and their Beneficial in the Garden website. Great project!

The BugLady would like to see this robber fly, please.