The BugLady is still on hiatus but plans to get back in the saddle soon. She spent a magic day at the river recently, where the bushes were sparkling with Ebony Jewelwings. This is a slightly modified version of an episode from 2011 – some new words, all new pictures. 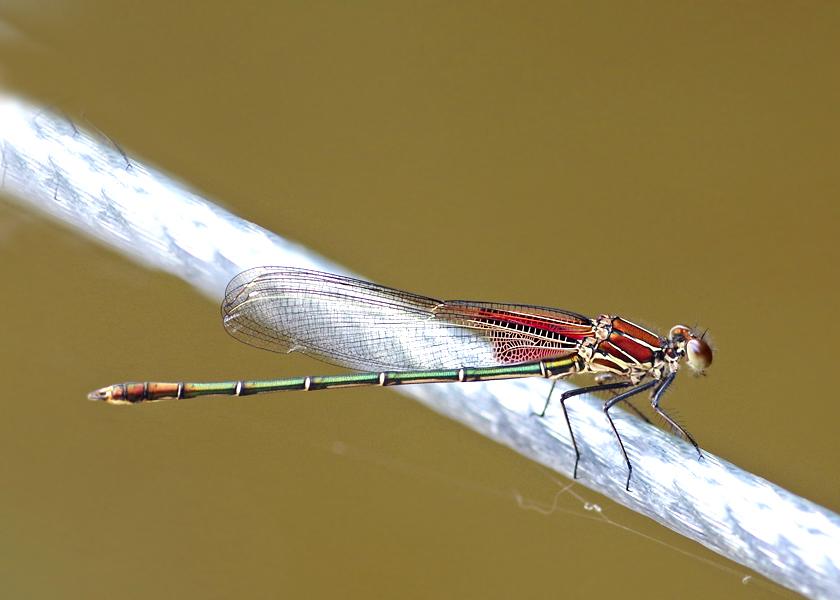 The stars of today’s show are two, big (close to 2”), beautiful, unmistakable members of the Broad-winged damselfly family Calopterygidae. Once again, the BugLady would like to recommend Damselflies of the North Woods by Bob DuBois (watch for the 2nd edition, coming soon, if the creek don’t rise), Dragonflies and Damselflies of the East, by Dennis Paulson, The Beginner’s Guide to Dragonflies, by Nikula, Sones, Stokes and Stokes, and the online Wisconsin Odonata Survey. There are eight species of Broad-winged damselflies in the US, and the Odonata Survey site lists four of those for Wisconsin – River and Ebony Jewelwings, and American and Smoky Rubyspots (but the Smoky Rubyspot has been recorded from only two counties in the extreme southern part of the state). 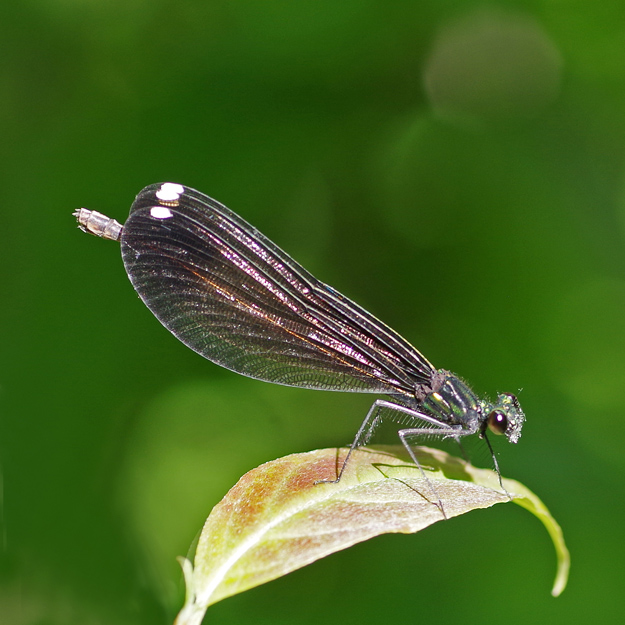 Broad-winged damselflies get their name from the base of their wings, which taper gradually instead of looking “stalked,” as in other damselflies. When they sit, they hold their wings together vertically over the top of their abdomen. They come in metallic colors, with the male showier than the female (the female is no slouch, though). 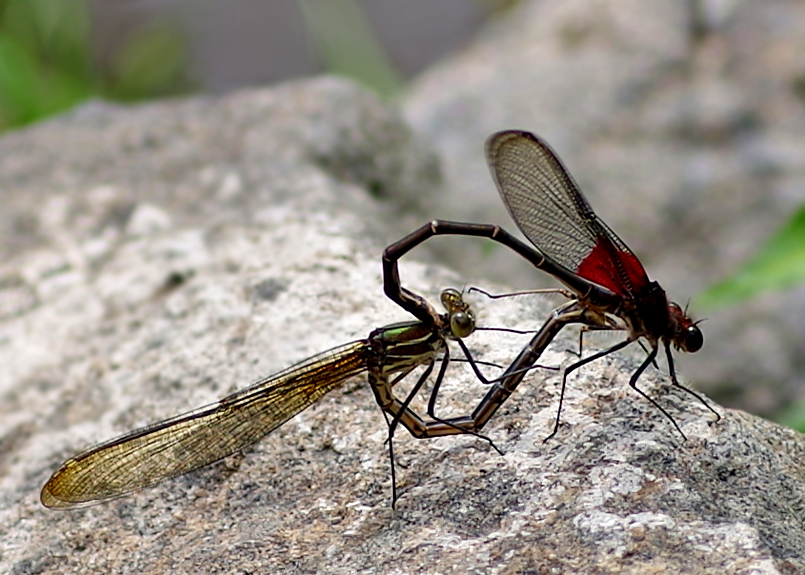 Like dragonflies and other damselflies, Rubyspots and Jewelwings are tied to the water – in this case, running water. Other Odonates may hunt far from streams and ponds, but the Broad-winged damselflies tend to be homebodies. They are perchers – sitting on plants or rocks and sallying forth to hunt or to defend their territories. Rubyspots seldom gain more than a foot or two in altitude, but the BugLady has seen jewelwings seven or eight feet off the ground. Like all Odonates, they are carnivores, both as naiads in their aquatic nurseries and as airborne adults, eating whatever small, soft-bodied invertebrates they can catch. They are eaten by a host of bugs, bats and birds, as well as by some fish, frogs and turtles.

Ebony Jewelwings and American Rubyspots lay their eggs in the stems of submerged plants or in decaying wood in waters with a moderate current. The books say that the males guard their ladies during egg-laying but are not in contact with them (but keep reading). Their naiads, which are well camouflaged and not agile, move little and are found on vegetation under water. Broad-winged damselflies overwinter as naiads, and full grown naiads are about an inch long by the time they are ready to emerge as adults the next summer. 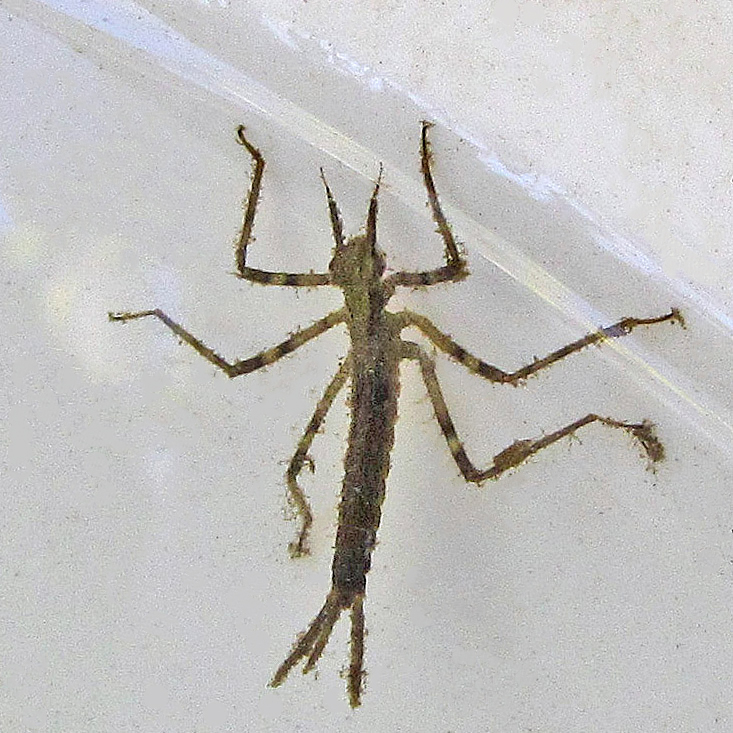 EBONY JEWELWINGS (Calopteryx maculata) (“beautiful wing with a spot”) prefer streams in woods east of the Rockies, and they are said to be the most common damselfly in North America (they certainly are among the most striking). Their main flight season is in June and July but a few hang around into September. Several sources testified about their approachability and the BugLady laughed a lot – they can be pretty jumpy. The flight of Ebony Jewelwings is often described as “butterfly-like,” and they remain on the wing until late in the afternoon. 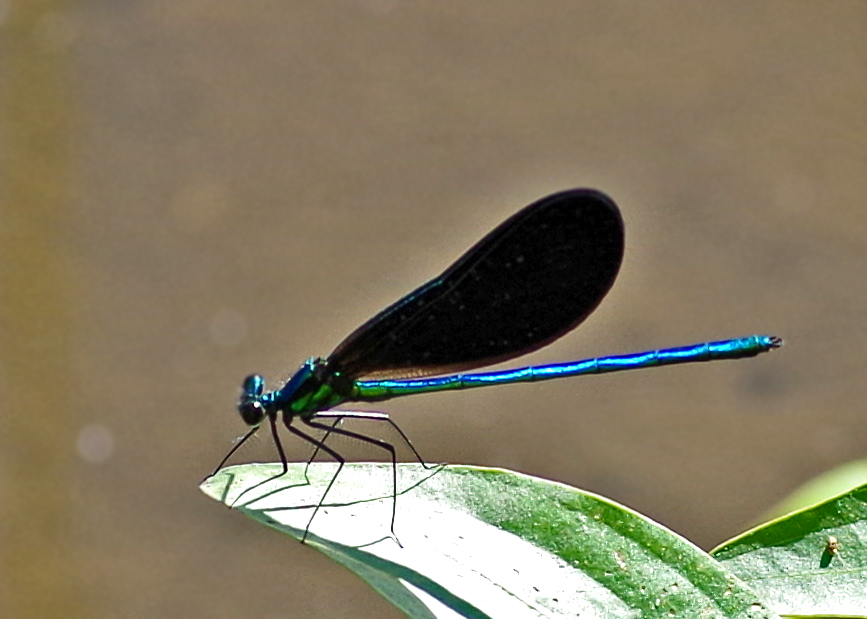 Male Ebony Jewelwings (a.k.a. Black-winged damselflies) have a stunning Kelly-green, metallic head, thorax and abdomen (unless you see them from a certain angle, and then they are a shiny royal blue), spectacular coloration that effectively camouflages them in the sun-dappled wetland edges that they inhabit. The females’ greens and blacks are more muted and they have a white dot at the tip of each wing. 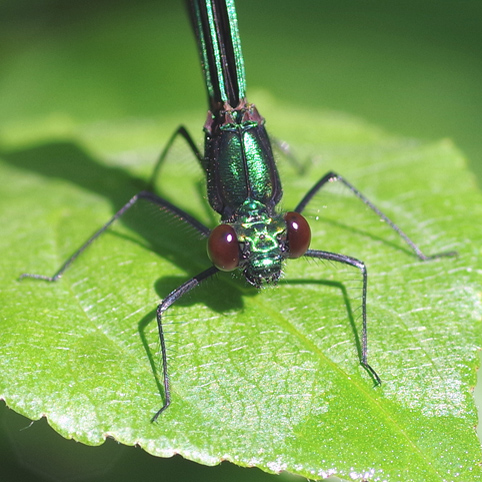 Donald Stokes, in his wonderful Observing Insect Lives, reports that males are territorial. When an Ebony Jewelwing spots an intruding male, he will attempt to chase it away. The two males bounce off each other until one wears out and gives up (males are territorial around patches of floating aquatic vegetation, and patches of the river may sparkle with them). Plan B involves a behavior called “wing-spreading,” in which he psyches out his rivals by spreading his wings and raising his abdomen (raising the abdomen displays a bright, white spot under its tip which the BugLady has never seen). An approaching female rates a “cross-display,” in which the abdomen is raised, the hind wings spread, and the front wings folded. 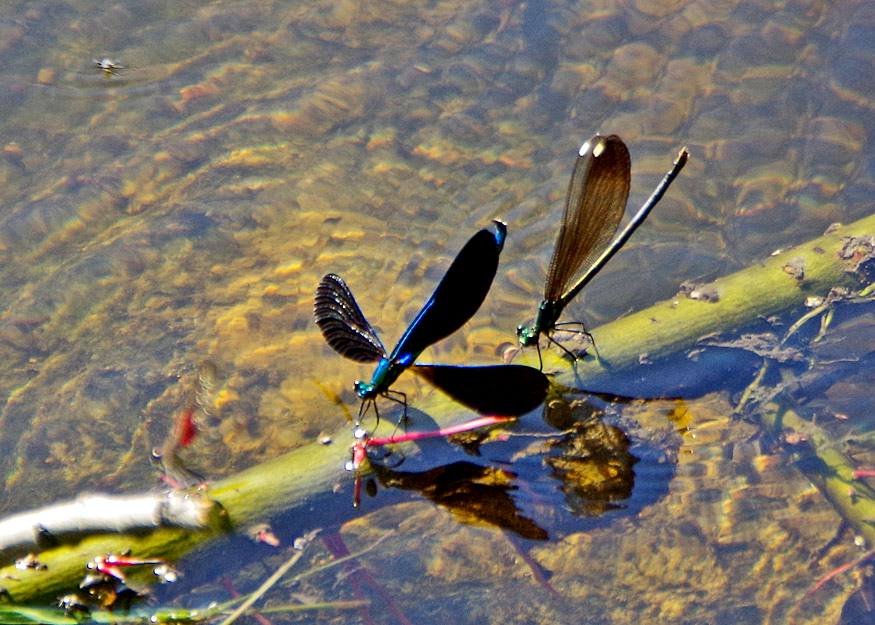 According to Stokes, if a female is unimpressed, he flies around in front of her, faces her, and performs the irresistible “rapid-wing-flutter.” Both males and females have commitment issues. DuBois rates her as “blatantly promiscuous,” mating with four or five different males a day for two weeks or so and depositing nearly 2000 eggs! Stokes says that while the male is guarding her egg-laying efforts, he is making cross-displays to nearby females (though he won’t pursue them until she is finished and out of sight).

The AMERICAN RUBYSPOT (Hetaerina americana) likes larger streams and rivers; its range includes all of the lower 48 states (it’s uncommon in the Pacific Northwest) plus the eastern half of Canada around the east edge of Hudson Bay. The American Rubyspot is a summer damselfly that notably likes a crowd (one observer caught 75 in a single net), and it has been observed feeding in groups (swarm-feeding) on clouds of emerging mayflies. The reason for its name is obvious if you see a male in bright sunlight, but in shade their posture is characteristically “hunched over,” and they are not as conspicuous. The BugLady often sees them as red dots on rocks or on floating plants in the river. The proximal third of the male’s wing is ruby/blood red (according to Paulson, the spot starts small and grows in size for about two weeks). The (more variable) female’s wing often has a red wash at the base, and its overall color is often amber.

Males defend territories that change daily, chasing rival males in ever-widening circles until one poops out and flies off and the other claims/reclaims the spot. Females are also somewhat territorial, but neither gender has display behaviors like the Ebony Jewelwing. Receptive females fly into a territory, hover, and are grabbed/clasped by the male. As they fly in tandem to a perch to exchange bodily fluids, rival males may charge them and separate them. Duke University professor Clifford Johnson described how, still clasped, they may land on a floating mat of vegetation. The male walks backwards toward the water with the female backing up behind him until the female is fully submerged (several sources noted that she is partly to completely submerged while laying eggs, but she will enter the deep end on her own, too). She may stay under water briefly or for almost an hour (in fact, though other researchers have seen them, Johnson said he never saw a female re-emerge and wondered where/if they did). The male guards her from all comers – con-specific or not. 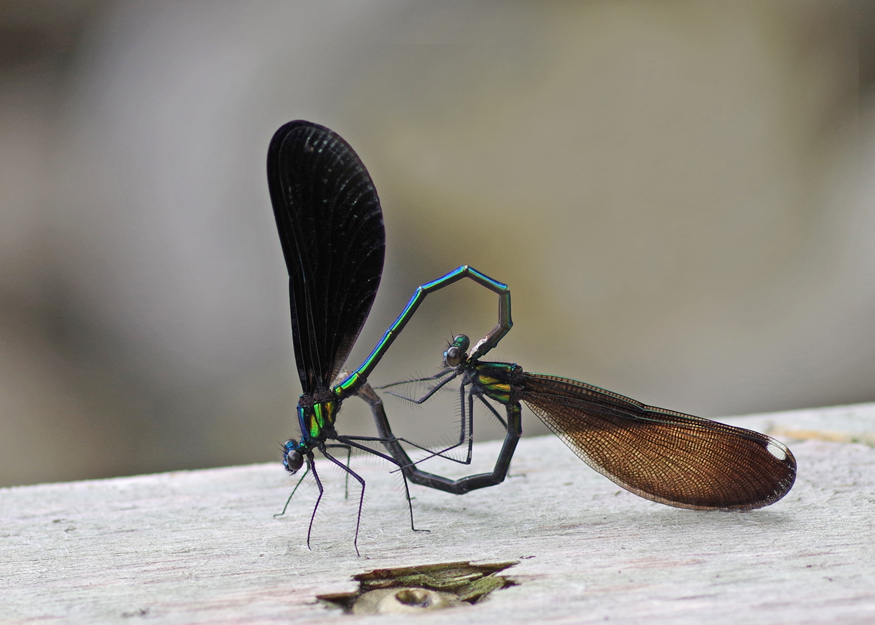 Ironically, those crimson wing spots that make us gasp render males potentially more visible to predators as they cruise low over the river’s surface. And, it turns out, they are also a “hunting handicap” that make males more visible to their own flying prey. In one study, males (and females with red spots painted onto their wings) gained weight more slowly than the better-camouflaged “natural” females. The things we do for love. 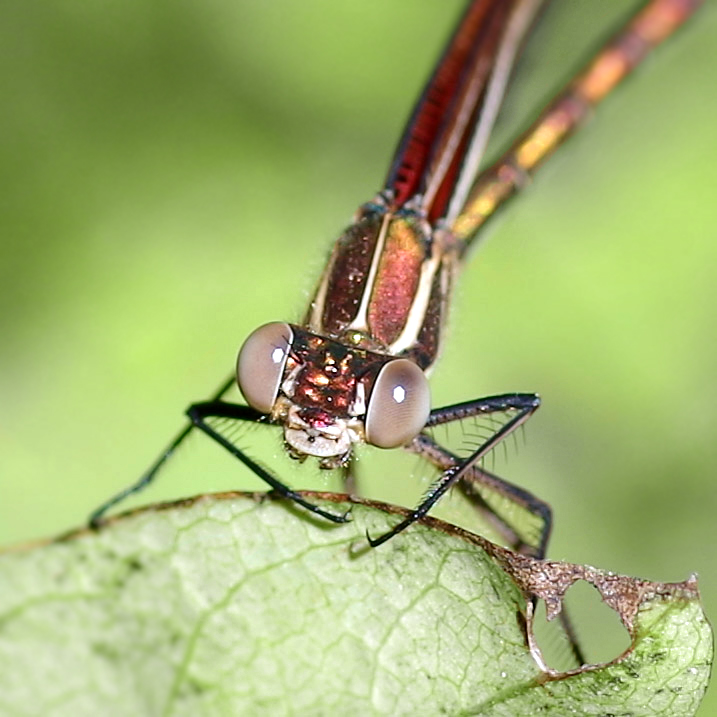 Find a river and enjoy the show.