While she was researching soldier beetles a while back, the BugLady found a bunch of soldier beetles that were lightning beetle look-alikes, and sure enough, when she checked her “lightning beetle” pictures, she had to re-label a few. After looking at pictures of some of the Net-winged (vein-winged) beetles on bugguide.net recently, she may have to go back over her LBs and SBs again. When alarmed, lightning beetles exude poisonous droplets from the base of their wing covers (elytra), which causes predators to avoid them, so they are worth imitating. But there’s more to the story than that (there usually is).

Based on habitat (the sand prairie at beautiful Spring Green Preserve State Natural Area in Sauk County), the BugLady thinks this is a Reticulated (resembling a net; having veins, fibers or lines crossing) Net-winged beetle (Calopteron reticulatum). If not, it’s a Banded NwB (C. discrepans). The two can be hard to tell apart—the RNwB is alternatively called the Banded net-winged beetle, and it’s been suggested that they may be subspecies. The RNwB is the most common of the four or five members in its genus that are present in North America east of the Rockies, and the other species are more attached to woodlands. According to bugguide.net, Calopteron means, aptly, “beautiful wing.” No matter what their color, NwBs typically are soft-bodied, slow-moving beetles with thick antennae and veiny, often red/orange and black wing covers that they hold swept-back in a delta configuration. They are in the NwB family Lycidae (possibly ((but inexplicably)) from the Greek lykos meaning wolf), and family members can be found world-wide, especially in warmer climates. 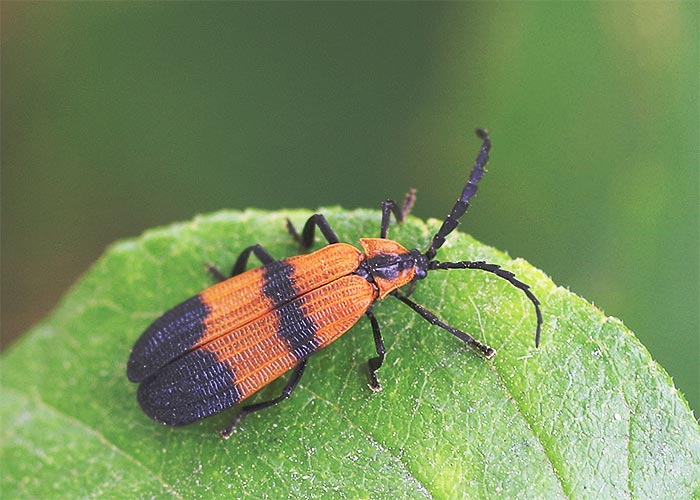 Despite the beetle’s flashiness and the weirdness of its larva, there are still some rather large gaps in our knowledge of its natural history. Some sources say that nothing is known about where the NwB lays its eggs or about the early larval stages. Others report that beetles in this genus oviposit on the bark of dead, dying, or injured trees, and that the larvae feed under the bark. Or in rotten logs. Or in leaf litter. Or, possibly, in soil.

There is uncertainty about the NwB’s diet, too. Depending on what source you read, NwB larvae eat tiny invertebrates that share their environment, or they feed on slime molds, fungi and fermenting plant juices. Adults are variously listed as pollen/nectar/honeydew-feeders, as insect eaters, or as short-lived non-feeders.

The bizarre-looking late-stage larvae of some species of NwBs gather in spectacular congregations before pupating, and they may reconvene after emerging as adults. NwB larvae do not create a special space in which to pupate; they simply remain within their final larval exoskeleton—an interesting, energy-saving strategy that is not practiced by many other insects. There are some great pictures of various life stages of the NwB at Featured Creatures, University of Florida.

How can the adult, pupal, and larval RNwB get away with being so conspicuous? Their bright wings are aposematic (warning) coloration that alerts potential predators to their general un-wholesomeness. A whole clump of brightly-colored critters calls attention to itself as a defense mechanism. Diner Beware! It turns out that, predictably, NwBs neither smell nor taste so good.

The BugLady is delighted when an insect she is researching is included in Thomas Eisner’s book Secret Weapons: Defenses of Insects, Spiders, Scorpions, and Other Many-legged Creatures. Eisner reports that the RNwB makes chemicals called pyrazines that give it a continual “faint but distinctive stink” (the BugLady confesses that she neglected to sniff the beetle or to poke it. Next time…). It also produces “a series of fatty acids present throughout its body, which may be responsible for its distastefulness.” Like fireflies, the NwB’s predator-deterrent is not an aerosol spray; it’s a “drip” that starts at the wings. Eisner says that “Lycids have no defensive glands, but they tend to bleed when seized, usually first from the wings, the ridges of which are hollow and subject to rupture. It is by bleeding that lycids externalize their unpalatable factors.”

Please disregard the assertion of a blogger who wrote that the NwB is a moth mimic. Eisner tells us that NwBs are imitated by beetles from seven beetle families and by “diverse Lepidopterans.” See Black-and-yellow Lichen Moth that’s an NwB mimic and this copycat long-horned beetle.

Moths Without Bios - in Camo