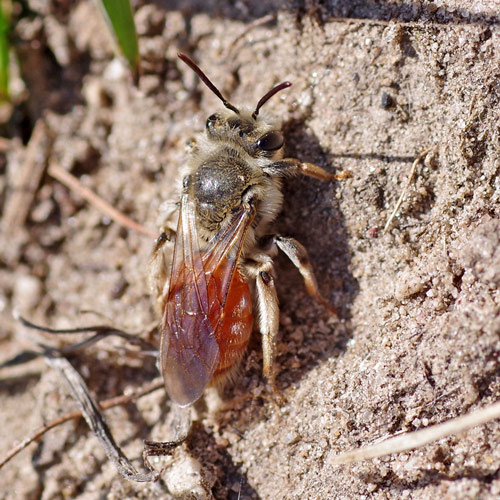 The BugLady visited Riveredge Nature Center recently looking for adventure, and she found it even before she hit the trails. A dozen or so mining bees were flying around over a dirt bank near a bench – they were either nesting there or thinking about it (she came back a week later, and nesting was well-established). Mining bees are solitary, ground-nesting bees in the family Andrenidae, a large family with about 3,000 species, almost half of which are in the genus Andrena (there are 450 Andrenas in North America).

Most of them are small (a half-inch-ish), fuzzy, black and tan/black bees with a striped abdomen (or not). There are some gorgeous exceptions like this spectacularly orange Milwaukee mining bee, (Andrena milwaukeensis), a woodland bee that was discovered in 1903 by a Milwaukee entomologist. Andrena genus members have hair on their faces between the eyes and antennae (like a mini crew-cut), and they have long hairs on the upper sections of their back legs where they stash pollen (pollen-carrying equipment is called scopa/scopae, from the Latin for “broom”). Pollen also sticks to hairs on the rest of their body.


Mining bees are important native pollinators. Like bumble bees, they are “buzz pollinators – the vibration caused by their buzzing loosens pollen from a flower, and the difference in electrostatic charges between the bee and the pollen causes the pollen to stick to them. Many species specialize on particular groups of flowers. They are present throughout the growing season, but they’re famous for being among the earliest pollinators out of the box (they often emerge before the flowers do and bask on sunny surfaces until they warm up enough to fly). Azalea, waterleaf, dogwood, violet, hawthorn, spring beauty, cranesbill, trout-lily, cherry, and golden alexanders mining bees kick off the wildflower season; and evening primrose, aster, sunflower, coneflower, and blazing star mining bees finish it off. There are also vernal pool, miserable, frigid, unpolished, mournful, lonely, neighborly, well-armed, and nude mining bees.

[Nota Bene – BugFan Andrea recently asked the BugLady a question about Cellophane bees, aka Plasterer bees (family Colletidae), small bees that were not on the BugLady’s radar. They’ve got an interesting story and she needs to figure out the secret handshake for distinguishing the slightly-smaller mining bees from the almost-honeybee-sized cellophane bees so she can tell it. Bugguide.net calls them “Virtually indistinguishable from some of the Andrenidae mining bees.”]


Female mining bees excavate tunnels in soil and sand that they waterproof and make into nursery cells, each provisioned with a ball of pollen and nectar for their offspring. For mining bee basics, click here. They’re not social, like honey bees, but they tolerate other bees tunneling nearby.

Turns out that there were more than one species of mining bee at Riveredge that day – a spectacular little bee with a red abdomen, and some generic-looking mining bees to be named later (or maybe never, as BugGuide.net says, “Identification to species level usually requires an expert.”). They didn’t like each other much, and at first the BugLady thought that the red interloper might be a cuckoo/blood bee.

A few years ago, she photographed a small bee with a red abdomen, a sweat bee (family Halictidae) in the genus Sphecodes, the “blood bees” or cuckoo bees. Blood bees (named for their color) are kleptoparasites that wait until another female sweat bee prepares a chamber for her eggs, and then move in and insert their own egg. Sometimes there’s a dust-up between the blood bee and the tunnel’s rightful owner. This recent Riveredge bee looks similar to a Sphecodes bee, but because the blood bee doesn’t collect food for her larvae, she doesn’t have/need scopae. The Riveredge bee was pretty hairy, stem to stern, and the BugLady thinks it’s a “Red-tailed Andrena” (Andrena erythrogaster).


RTAs are (new vocabulary word) “oligolectic” – they are an oligolege of willows – which means that they specialize in willows, and the pollen balls formed by female RTAs are made of willow pollen. Makes sense, because willows bloom early and prolifically (see this episode from March of 2012, that freakishly early, warm spring). Males RTAs patrol plants, keep an eye on the nesting sites, and mix it up with other bees; they likely encounter females on willows and mate there. RTAs dig their tunnels in bare-ish sites that have some vegetation/debris on top to hide the nest holes and shelter them from rain, and they can be found in mixed-species groups.

The BugLady, who is accustomed to finding scant information about the insects she researches, was delighted to come across a paper published in the Illinois Natural History Survey Biological Notes in 1988 called “Observations on the Bionomics of the Bee Andrena {TyIandrena) erythrogaster Ashmead (Hymenoptera: Andrenidae)” by Eugene R. Miliczky. For those of us who don’t exactly hit the ground running in the morning, the BugLady offers Miliczky’s description of emerging RTAs:

“Prior to leaving on foraging trips, bees spent variable lengths of time sitting in their nest entrances. Especially long periods were spent there before the first departure of the day and on days with poor weather. Usually a bee sat just below ground level, facing outward with her antennae directed forward at a slight, diverging angle. Over the next several minutes or up to an hour’ or more, the bee gradually emerged from the nest a step or two at a time. Often she moved her head from side to side prior to a short advance. Not infrequently a bee retreated down her burrow for a few seconds to a minute or more. Very small (2—3 mm) beetles and ants passing the entrance were at times sufficient to induce a hasty retreat. At other times, the bee backed slowly and methodically down the burrow for no apparent reason. Eventually, however, the bee emerged completely.”


Sometimes a female returns from her foraging trips with pollen and sometimes with nectar, and she probably provisions only one egg chamber each day. Eggs hatch in eight to ten days, and when an RTA larva emerges into its sealed chamber atop its bed of pollen, it simply inclines its head downward into the center of the cache and starts to feed.

So in the end, the BugLady found out the part of the “Who?” “What?” and “Why” of her mining bee encounter, but the rest will have to wait for another day.

Here are some pictures of Red-tailed Andrenas and of unidentified mining bees enjoying the earthen bank and the willows and a spring day.