One of the BugLady’s favorite butterflies (and butterfly names) is this beauty, the Red-spotted Purple (RSP) (Limenitis arthemis astyanax) (artemis is the Greek goddess of the hunt and of the wild). RSPs belong to the Brush-foot family (Nymphalidae), which is a large family with over 3,000 species worldwide and 150+ in North America. Unless you are at one of the Poles, you have a chance to see a Brush-foot. Brush-foots are medium-sized butterflies; the RSP is about 2 ½” to 3,” and females are larger than males. Many Brush-foots are orange-ish butterflies with big knobs at the ends of their antennae. Their two front legs are bristly (hence the “brush-foot”) and are so much smaller than the other four that they’re no longer usable for walking (which gives rise to the nickname “four-footed” butterflies). Brush-foots fly with quick wing-strokes, and they also “flap-glide” with their wings held flat.

Red-spotted Purples are found in semi-sunny situations like stream and forest edges, woodland paths, and forest openings. In those habitats, adult RSPs feed on sap, rotting fruit, animal dung, and carrion, but they rarely visit flowers. They are seen from around the start of June through the middle of August. Males are very territorial, and they sit sentinel on vegetation, awaiting the appearance of females. 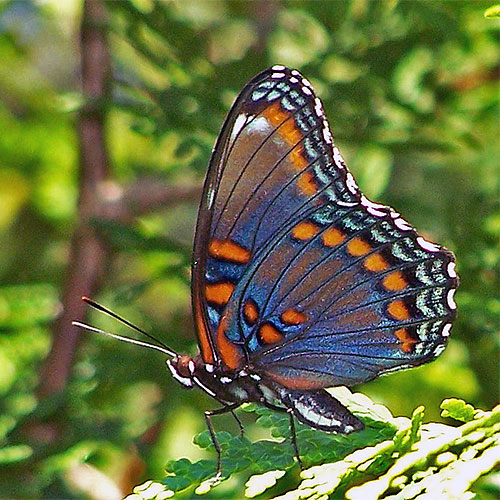 Lepidopterists have decided that this purplish-black, iridescent butterfly with red-orange spots on its underwings is the same species as the previously-separate-and-quite-different-looking White Admiral butterfly. White Admirals are dark and share the red-orange spots, but they have a striking white stripe running diagonally through their wings. White Admirals occur across the northern tier of states and southern Canada. RSPs occur throughout Wisconsin and east to the Atlantic, south of the Great Lakes. From central Minnesota through Wisconsin and east through New York, the two meet and hybridize, producing offspring with all manner of patterns and colors, and the whole group is sometimes called Red-spotted Admirals. In southern states, the RSP’s color makes it a mimic of the distasteful/toxic Pipevine Swallowtail, but that camouflage is useless in the north, where the Pipevine Swallowtail does not occur. There are four subspecies in all (both the Admiral and the Purple have a western form). In Wisconsin, Limenitis arthemis astyanax is the familiar RSP, and Limenitis arthemis arthemis is the (American) White Admiral. 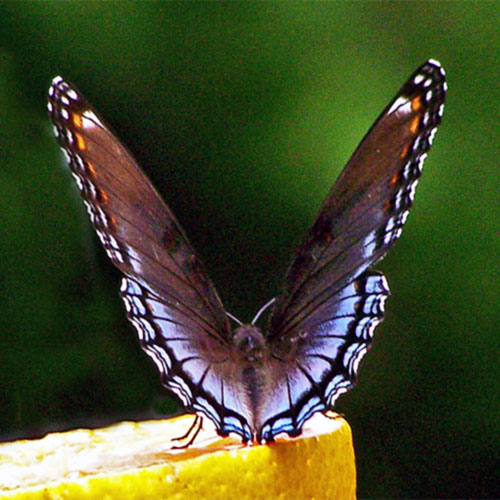 Eggs are laid, one at a time, on the twigs of a variety of “host trees” like willow, poplar, cherry, shadbush, birch and hop hornbeam, and the resulting caterpillars are usually spiny bird-poop mimics that graze on the leaves. There are two broods a year. Most of the caterpillars that hatch in early summer will metamorphose into butterflies in mid/late summer (some will snooze longer). Eggs from the second brood spend their winter in a chrysalis. Like their larvae, Brush-foot chrysalises are often thorny-looking. According to The Audubon Society Field Guide to North American Insects and Spiders by Lorus and Marjory Milne, the chrysalis hangs upside-down, stuck to plants (and walls) by a pad of silk. The BugLady isn’t actually sure who the empty chrysalis belonged to, but it is prickly and hangs upside-down, stuck to a surface by a pad. 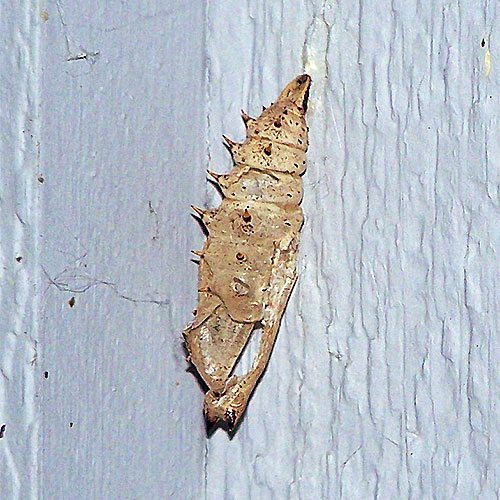