Meet another of the BugLady’s new neighbors, a handsome black beetle with red epaulets called the Red-shouldered Pine Borer. It came to her front door – well, actually, it was trapped in her front door, between the screen and the raised glass of the storm door, and its rescue involved dismantling the glass/screen assembly with one hand while holding a jar beneath the beetle with the other (empty flip-top Parmesan cheese containers make excellent bug jars). Five days later, it happened again, with the appearance of the red individual. 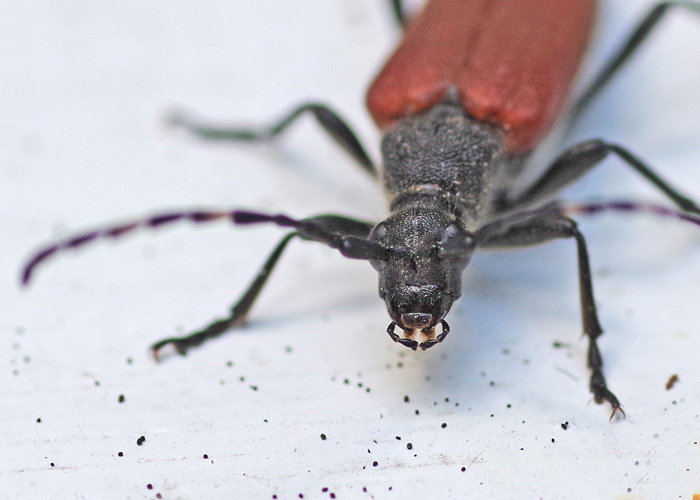 Red-shouldered Pine Borers are in the Long-horned beetle family Cerambycidae, so named because of their long antennae, antennae that make them favorites of entomologists (and collectors) everywhere. Some have spectacular antennae indeed https://blogs.massaudubon.org/yourgreatoutdoors/have-you-seen-this-beetle/ (click to enlarge the picture of this extremely threatening beetle). Cerambycidae (from the Greek kerambex – beetle – and keras – horn) is a large family with about 30,000 species worldwide and just under 1,000 in North America. 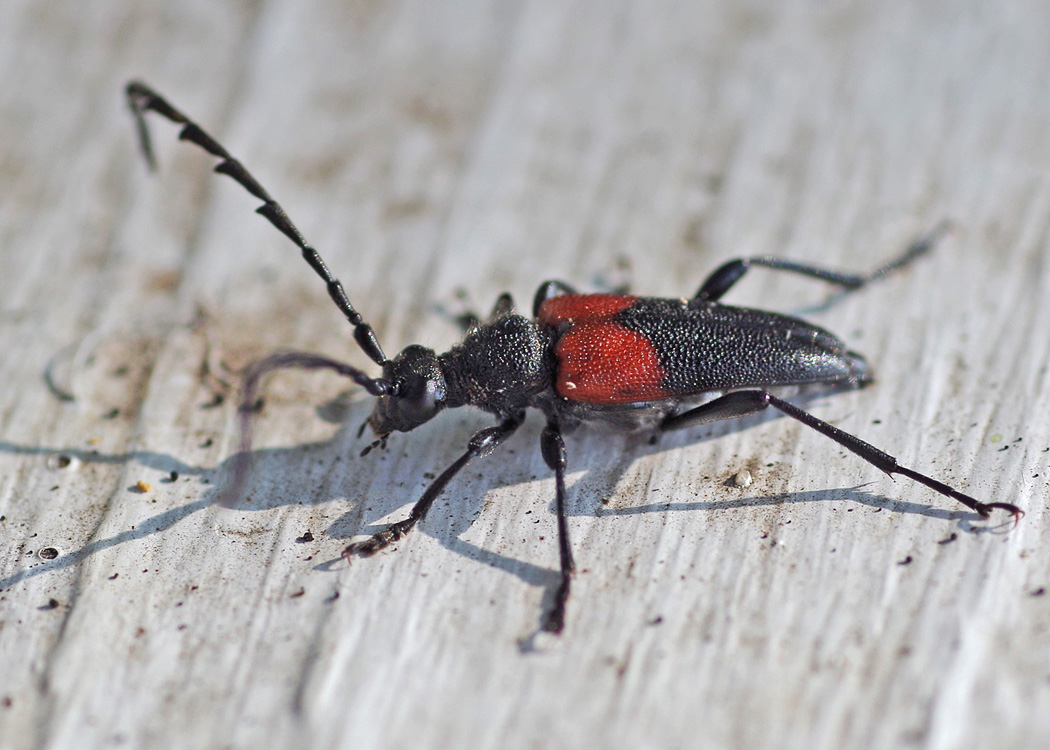 They are in the Flower longhorn subfamily Lepturinae, a group known for their, slim, sometimes-exaggerated wedge shapes and their habit of visiting flowers by day (they like “flat” flowers like Queen Anne’s lace rather than deep, tubular ones). There is only one species in the genus Stictoleptura in the New World, and it’s divided into three subspecies distributed across a big chunk of North America except for the Southeast. In his book Beetles of Eastern North America, Evans describes the range of our subspecies, Stictoleptura canadensis canadensis, as Newfoundland to Pennsylvania west to Ontario and Minnesota.

The elytra (hard wing covers) of RsPBs come in a variety of colors including all red, all black, and almost all black. Bugguide.net tells us that the first individual that the BugLady found is unusual because its antennae were black, not banded; the second (red) beetle had a few pale bands on its antennae, but the bands can be pretty noticeable. 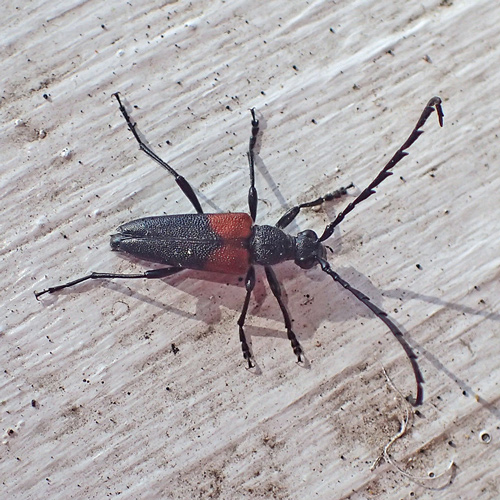 Another name for the Cerambycids is the Round-headed borers. As you might guess from those long, breakable antennae, it’s the larvae that earn the “borer” label. In general, Cerambycids may live from one to three years, mostly in the larval stage, and in general, the larvae don’t kill trees, they tunnel in and initiate the breakdown and recycling of stressed trees and dead and decaying wood (except for prairie species, which feed in plant roots). Larvae of the RsPB are found in fir, pine, and hemlock. 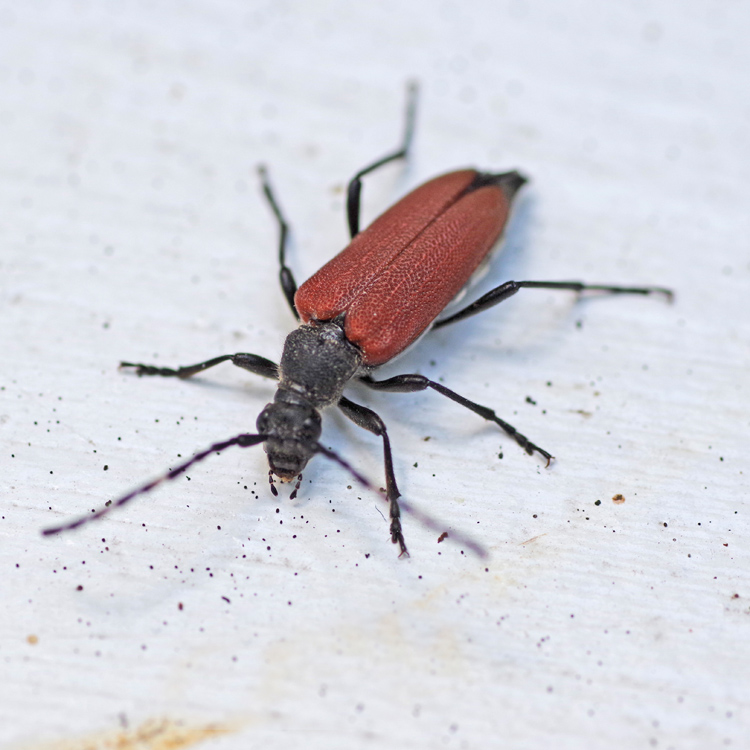 Adult Cerambycids may eat sap, fruit, leaves, pollen, nectar, and fungi. Any arthropod that crawls across flowers is, by default, a pollinator, but the RsPB is probably not an important one. In reference to beetles’ contribution to pollination, the BugLady was tickled to learn the term “mess and soil pollinators.” According to the US Forest Service:

Beetles were among the first insects to visit flowers and they remain essential pollinators today. They are especially important pollinators for ancient species such as magnolias and spicebush. Beetles will eat their way through petals and other floral parts. They even defecate within flowers, earning them the nickname “mess and soil” pollinators.

(The beetles she found were on the inside, looking out, and the BugLady is hoping that’s because the door is porous, and not that the cedar walls of the cottage will soon be toast.) 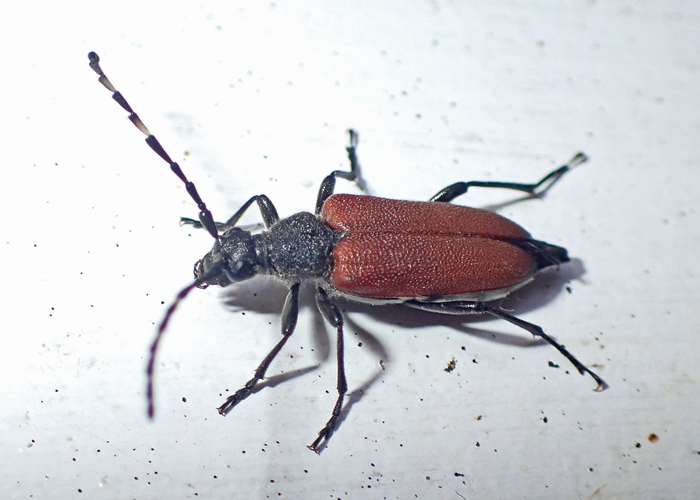 Alas, the Wikipedia write-up of the RsPB is not a shining example of crowd-sourcing. It’s a very brief and general account of the whole family Cerambycidae, not of the species; it reads like a bad translation, and it was subsequently cut and pasted unquestioned by a number of other legitimate internet sources like inaturalist. Caveat emptor.