Here’s the story behind this picture. The BugLady was celebrating a fine, early-summer afternoon at the edge of a pond at the Forest Beach Migratory Preserve (an Ozaukee-Washington Land Trust property north of Port Washington, WI). She logged a dozen Odonates around the pond that day (the order Odonata includes the dragonflies and damselflies), but she had her macro (close-up) lens on when her first-ever Red Saddlebags sat down seven or eight feet away (not close enough). Red Saddlebags rarely perch for long, and the BugLady didn’t dare try to switch to the zoom lens. The result is this Hail Mary shot. 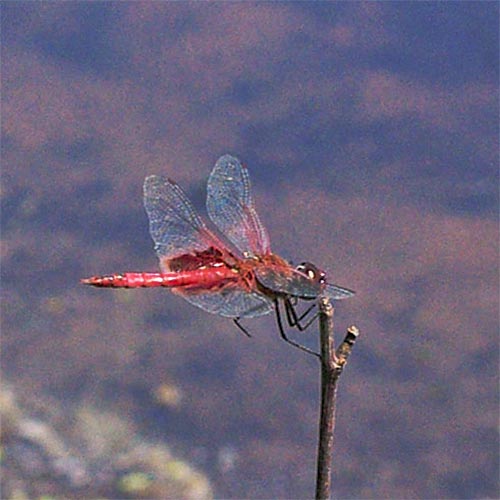 The Red Saddlebags (if, indeed, this is a Red Saddlebags instead of the much-rarer-but-still-possible Carolina Saddlebags—the angle of the dragonfly hides some important diagnostic features) has a range that’s shaped like a bell curve (see this really cool dragonfly range-finder. Type the genus of your dragonfly, in this case, Tramea, into the “Taxon” box and select your species from the drop-down list). The RS is more western species, but it occurs throughout the East; the CS is mostly found east of a line from Texas to Wisconsin.

Called the Red-mantled Saddlebags in some references, the Red Saddlebags (Tramea onusta) is in the Skimmer family (Libellulidae), a large group of often-flashy dragonflies. The Black Saddlebags (Tramea lacerata) was a BOTW a few years ago. Black Saddlebags are definitely migratory, traveling south along the Lake Michigan shoreline each fall with masses of Green Darners, and it is one of the target species of the Xerces Society’s Dragonfly Pond Watch Project. RSs are considered migratory by many experts.

RSs are about 1 ¾” long with a wingspread close to 3 ½”. Their hind wings are noticeably wider than their front wings, and it’s pretty easy to see where the name “saddlebags” comes from (when they perch with their abdomens pointed down, the pigmented saddlebag shades/cools the abdomen). The color of the RS’s saddlebags varies from red to dark brown, and there’s a clear “window” within each saddlebag. Females have a tawny body; males are redder. Red veins in the wings seem to be more diffuse in the RS and more restricted in the CS. RSs bear a passing resemblance to the smaller and far more common Calico Pennant, which also has saddlebags but which behaves quite differently.

For an RS, life begins when eggs are deposited in the warm, quiet, shallow waters of a lake or pond (they are known to use temporary/seasonal/rain ponds where fish are absent). Males patrol territories, flying and hovering over areas as large as 3,000 square feet, but mating occurs while the couple is perched in the treetops (they like to roost high off the ground, too).

Male Odonates often protect their genetic investment by guarding the female while she oviposits. Depending on the species, a dragonfly pair will fly to the ovipositing site “in tandem” (attached), and the male will continue to clasp her by the “neck” while she deposits her eggs (contact guarding). In other species, the male releases her but guards her from a perch nearby or from the air (hover-guarding). RSs are termed “dancers.” They fly in tandem, just above the water’s surface, to a likely spot, then the male releases the female and hovers as she drops down to the surface to dip the tip of her abdomen into the water and oviposit into a floating mat of algae or other aquatic vegetation. She returns to the male, who clasps her again as they fly to another spot to repeat the dance. 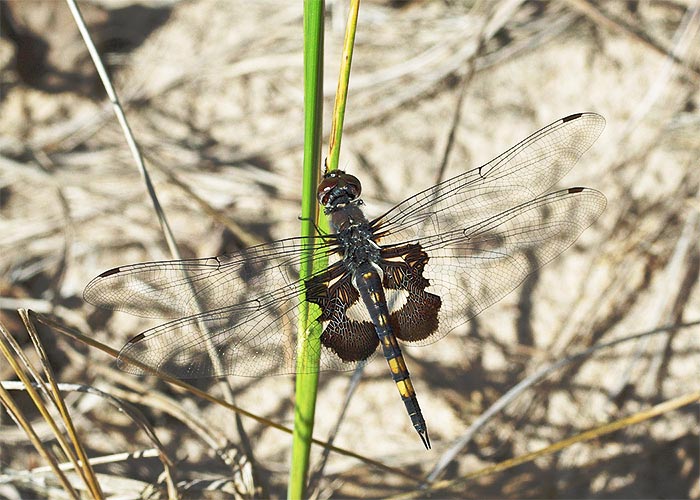 It’s a risky strategy. Although there are no unpaired RS females hanging around the pond edges, there are plenty of solo males. The half-minute or less that she is “unattached” is enough time for an intruder to rush in and break up the twosome. Although he may not (immediately) end up with the lady, the interloper does interrupt her egg laying. Researcher Allen Young founds that these raids were highly successful and wondered what impact they might have on local population dispersal, but he suggested, not surprisingly, that any additional studies on this phenomenon should be done using “a species more easily marked and captured” than the RS.

The next male that grabs the sidetracked female may be able to remove the previous male’s sperm. Many kinds of male dragonflies will attempt to remove from the female any sperm that she retains from a previous mating before she picks up his spermatophore (sperm packet). In her blog, Dragonfly Woman tells of a German dragonfly that gives the female a good shaking when he grabs her, in order to dislodge any bodily fluids from prior liaisons.

The eggs hatch into carnivorous naiads that hunt for small invertebrates while clambering around on underwater stems. Adult RSs hawk small, soft-bodied insects from the air and often form feeding swarms from six to twenty feet off the ground, far from water. Their powerful flight alternates flapping with gliding.

For some eye candy, take a peek at some Arizona Odonates.