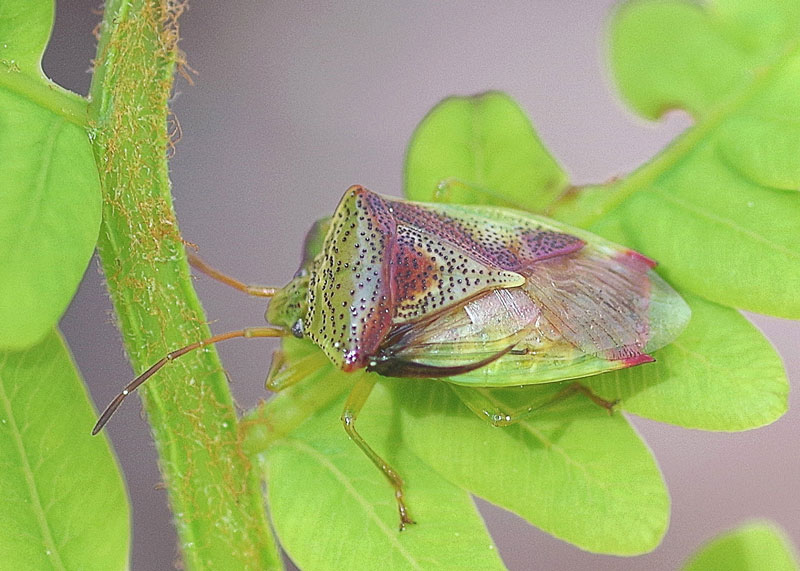 The BugLady found this beautiful, rosy Red-cross shield bug while she was wandering around at the north end of the Bog on a fine day in May. Once upon a time, she would have been correct if she had called this a stink bug. Stink bugs are in the family Pentatomidae, a large bunch (5,000 species worldwide) of true bugs that defend themselves, as both nymphs and adults, by producing and deploying a smelly liquid from glands in their thorax (the “penta” refers to the five segments in their antennae). They have a conspicuous “scutellum,” that triangular-to-oblong bit of the thorax that extends back over the abdomen. Their lower legs (tarsi) usually have three segments, and they have piercing/drinking straw mouthparts for sucking plant juices.

Here are some common species of Wisconsin stink bugs:

Because of the shape of the adults, Pentatomids have also been called shield bugs, but these days, that name is more properly attached to the family Acanthosomatidae, a group that—you guessed it—was moved out of Pentatomidae and elevated to family level.

Acanthosomatidae is a small family (only six of the 180 species live in North America) that favors northern/temperate climes (and in the south, higher elevations). Their shape is oval, their scutellum moderate, and while their antennae have five segments, their tarsi have only two. They also have piercing mouthparts , and they can also make a stink though the operative glands are on the abdomen. Shield bugs have carved out a feeding niche for themselves on woody plants—unlike their stink bug brethren, most of which (except the predaceous species) feed on juices of herbaceous plants.

Their family name comes from Greek words acanthos for “spine/thorn” and soma for “body,” which refers to a forward-pointing spine on the underside of the abdomen.  The BugLady couldn’t find a super picture of it, but she thinks you can see it right smack in the middle of this bug , near the dark tip of the mouthparts.

Another common name for the Acanthosomatidae is “Parent bugs.”

Parental care is uncommon in insects, whose usual approach to ovipositing is “lay ‘em and leave ‘em.” Although there are instances of paternal care, most is maternal.  (Isn’t it cool that paternal and parental have the same letters in them?) Some species of Parent bugs protect both their eggs and the early nymphal instars from predators and parasites, which really boosts survival rates .

If it’s such a good idea, why doesn’t everybody do it? Not all family members provide hands-on care, but their eggs are not without resources. Before they depart, females smear the egg surface with a substance that repels potential marauders. The goo is created in paired, abdominal organs called Pendergrast’s organs (your esoterica for the day), and the female spreads it on the eggs with her hind legs. Hanging around and protecting offspring can be costly physically, but producing the protective egg coating is costly, physiologically. Research by Tsai, Kudo and Yoshizawa demonstrates that the bugs don’t do both, and that Pendergrast’s organs are reduced or absent in species that practice maternal care. This is interesting because some scientists have suggested that the organs also produce pheromones that are part of the courtship.

The BugLady couldn’t find a lot of life history information about the Red-cross shield bug (Elasmostethus cruciatus) (cruciatus means “crossed” and refers to dorsal markings). They’re found across the continent as far south as northern Georgia and far north into Canada, but uncommonly on the Great Plains. Their host plants are alder, with maybe some birch thrown in.

Elasmostethus genus members do not provide maternal care for their young. Based on biographies of other genus members, the RCSB does not put all of her eggs in one basket. She lays lots of small batches of eggs. Predators may find some, but not all, and she places them near the developing fruits of alders (a European member of the genus sometimes cannibalizes the eggs of her sisters). A group of newly-hatched nymphs will hang around their empty eggs until their first molt, and then they start puncturing the fruits. Here’s a nice collection of pictures .

The Red-cross shield bug that the BugLady spied in May was nearing the end of its life cycle. They overwinter as adults in sheltered spots, then procreate and die when the warm spring air wakes the plants.

Bugs in the News IX