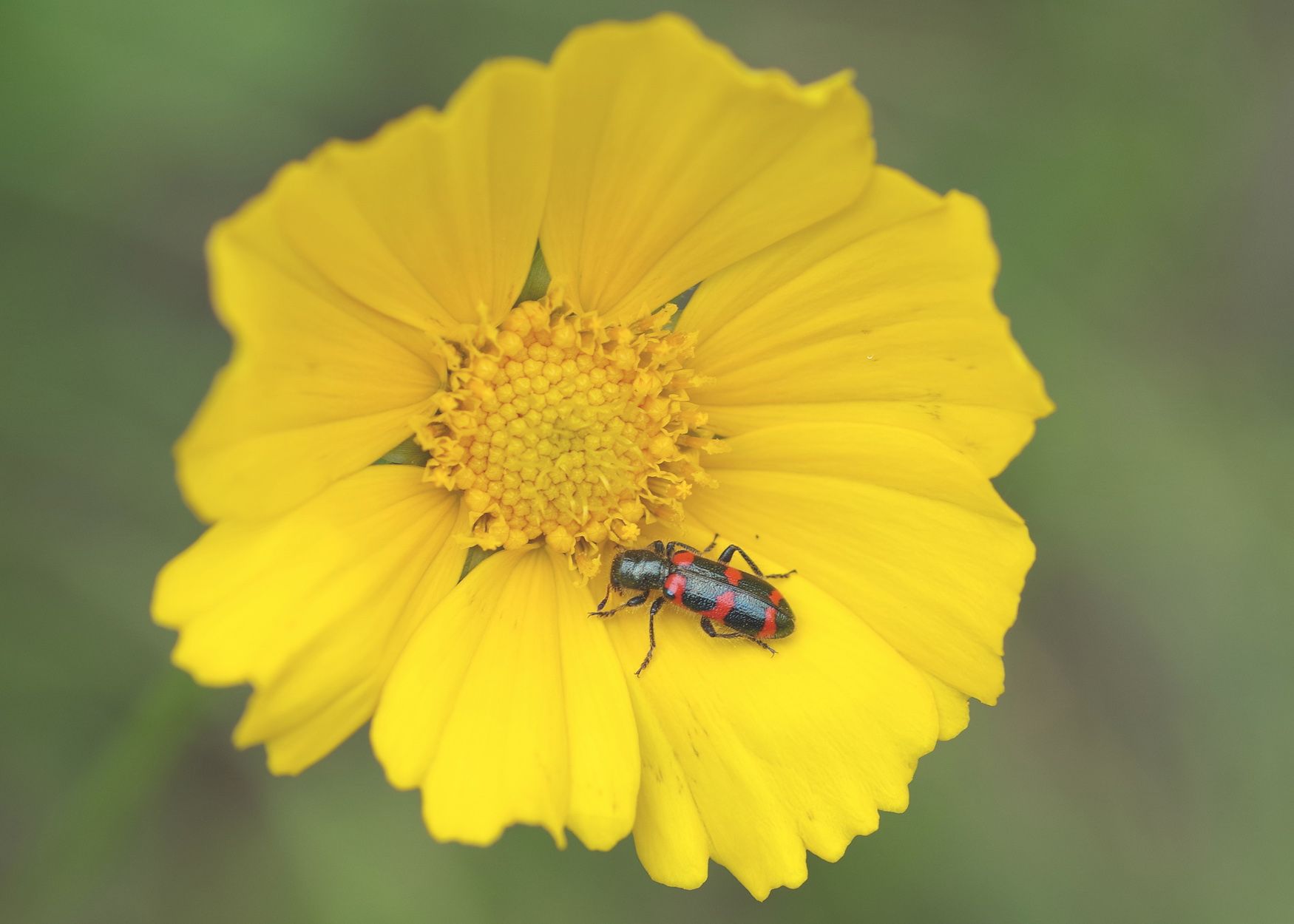 The BugLady is always amazed at how masses of Coreopsis flowers paint the Riveredge prairies gold in June, and she’s equally amazed at how few of them are entertaining insects. The books say that that Coreopsis is visited by a number of small, native bees, plus some butterflies and beetles, but she rarely sees much action on the flowers (sometimes a camouflaged crab spider waiting for incoming pollinators). Which is why this Red-blue checkered beetle was a pleasant (and colorful) surprise.

Checkered beetles are in the family Cleridae. We visited the Clerids seven years ago in the form of a cute little beetle that the BugLady found on a wild sunflower – see that episode for general info about the family. There are about 300 species of Checkered beetles in North America; many are colorful, and they lead diverse lifestyles, and some are biological controls of bark beetles. 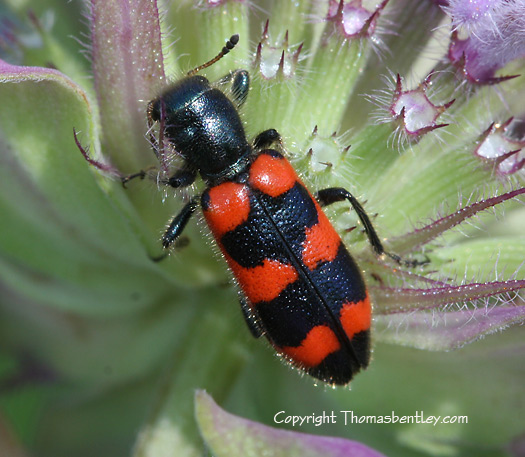 One of the really basic questions we can ask about an insect (or any animal) is “What does it eat?” On this subject, the reports on the RBCB are contradictory. Reputable sources say that the adults eat pollen from a variety of grassland, edge, and wetland flowers and are not predaceous – or that they feed on pollen and on small insects they find on the flower tops. Yes, the larvae are carnivores. But – do they feed only on the eggs and nymphs of the Sprinkled grasshopper, as some scholarly publications attest? Or, as other, equally scholarly sources say, do RBCB eggs stick to foraging bees and wasps and get taken back to their nests, where they hatch and feed on the bee larvae in the nest (and maybe on cached pollen, too)? Or do the eggs hatch on the flower and the larvae grab hold and ride back to wasp and bee nests? As several authors noted – this species needs more study.

RBCBs are beetles of early summer. Eggs are laid on flowers where the adults feed (or, if you’re in the Grasshopper Camp, in crevices on the ground). The larvae may overwinter as larvae, pupae, or pre-pupae.

Author Jeff Mitton poses some interesting questions about RBCBs in his article in the Colorado Arts and Sciences Magazine. First of all, considering its coloration [and its daytime feeding habits], it’s logical that the beetle enjoys some chemical defenses, but there’s no information Yea or Nay.

Second, this beetle a pretty much of a generalist, both in the variety of flowers the adults feed on and in the variety of hymenopterans the eggs/larvae hitchhike on. But [and Mitton is in the Bees and Wasps Camp] it’s one of a number of insects whose continued existence depends on the behavior of another insect – in this case, the bee that unwittingly carries it home. It’s a big gamble. He suggests that if its hosts became more fastidious and groomed the beetle eggs/larvae off their bodies, or if they were able to recognize the larvae in the hive and dispose of them, or if the hosts became extinct, the beetle would soon be on the road to extinction itself.

Speaking of beetles and “extinct,” here’s an interesting blog post on ladybugs (thanks to BugFan Molly). Be sure to click on the “Ladybugs of South Dakota” poster.

Closed for June – The Dark Side