Red Admirals belong to the Nymphalidae or Brush-foot family, the largest butterfly family; their antennae are very “knobbed” and their front pair of legs are reduced in size and covered with bristles. They are in the genus Vanessa, a genus that includes the Painted Lady and American Lady. Vanessas are widely distributed across the U.S. (and temperate regions in Europe, northern Africa and Asia) and occasionally have large population irruptions and wander. Red admiral adults and pupae are found in the south during the winter, and migrating admirals repopulate the north each spring. According to Ebner, in The Butterflies of Wisconsin, a few individuals may overwinter as adults in Wisconsin, emerging in the balmy days of late April and May. 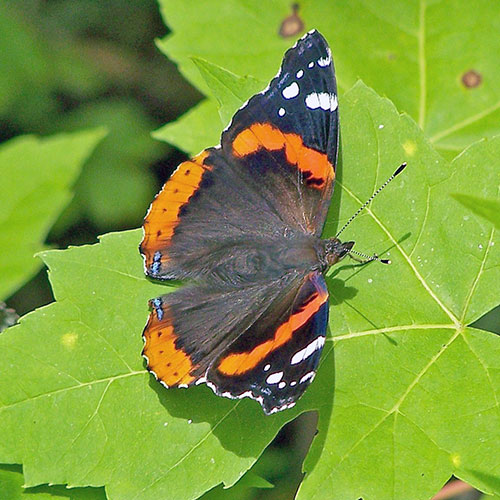 There are two broods a summer in most of the north. The spiny caterpillar eats spiny nettles; a caterpillar folds a leaf or leaves around itself, webs it/them shut, and feeds, protected, inside. It may pupate there.

The males set up territories in clearings and semi-sunny edges in the late afternoon. This was the Bug Lady’s favorite butterfly when she was in an earlier instar; if she stood for a while on the lawn, a red admiral would fly over and sit on her out-stretched hand and sometimes eat a little salty sweat. A small vignette in the formation of a Bug Lady. 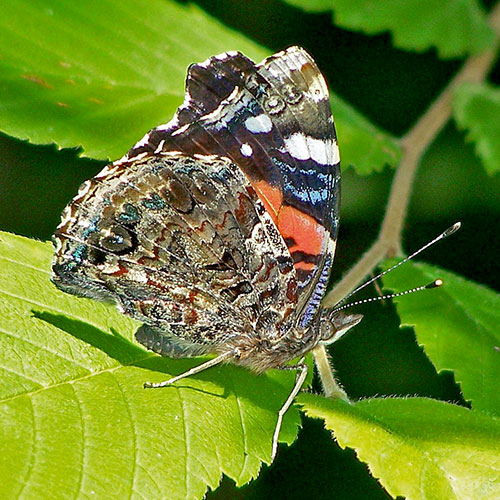 One older source says that butterflies and moths void a drop of liquid (red, in some species) soon after leaving their pupal cases. They sometimes do this while airborne, and when large numbers of butterflies emerged simultaneously, the phenomenon, called “Red Rain” was in ancient times and is today the subject of wild religious fear, superstition, repentance and/or massacre.