The BugLady has been out with her camera, walking non-aerobically and peering into plants. The “peering” has resulted in some interesting (if blurred) sightings (her macro lens is getting a bit cranky).

Amazing things have been happening on milkweed, probably spurred by a banner crop of aphids on the leaves.

The BugLady was mystified by the small, green “caterpillar” among the aphids and searched for its identity without success until she turned to a booklet called Milkweed, Monarchs and More by Oberhauser and Quinn. Turns out that it’s a Syrphid Fly Larva (a.k.a. hover fly or flower fly)—astonishing to the BugLady because the larva seems so much larger than the adult fly. Guess what the larvae eat? 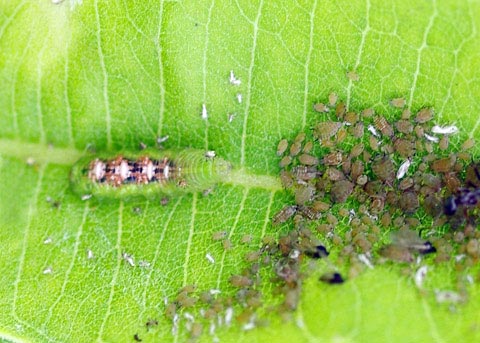 Milkweeds are alive with small, speedy Podabrus Soldier Beetles, which resemble and are closely related to lightning beetles. Guess what they eat? Apparently, they find love on the leaves as well as food, but the females don’t slow down much for it. This pair reminded the BugLady of a bike with a flag streaming out behind it. 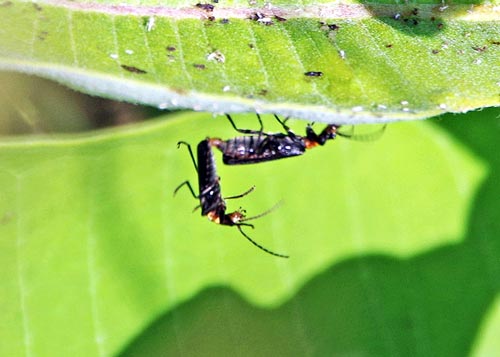 Credit Milkweed, Monarchs and More for the identity of the white “sea anemones” among the aphids. Ladybugs, both immature and adult, are famous for their insatiable appetite for aphids (and aphids> is the correct answer to the syrphid fly and soldier beetle questions). Ladybug Larvae in the Dusky Ladybug tribe, Scymnini, travel incognito among the aphid herds, mystifying the attendant ants that guard the aphids and harvest the honeydew exuded by them. The most famous of the Scymnini is the Mealybug Destroyer, Cryptolaemus montrouzieri, which was imported from Australia in 1891 to clean up on citrus mealybugs in California. Check out Bugguide.net for a Cryptolaemus montrouzieri Sistine Chapel moment. 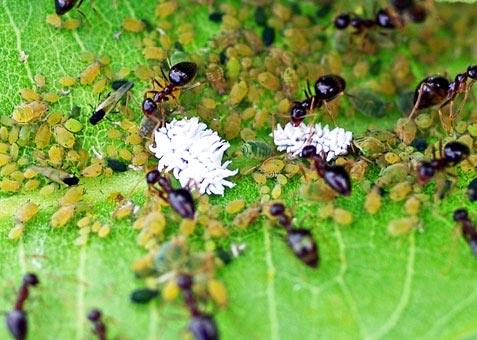 BugFan Mike tells the BugLady that this type of Crab Spider (which looks like it’s pulled up a chair at a Thanksgiving feast) is found on the ground or on bark, not on flowers. Apparently the spider hasn’t read the book. 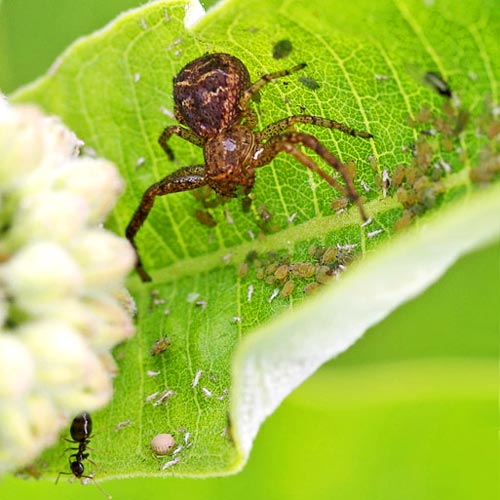 As the BugLady stepped into a small clearing in a woodland, a medium-sized dragonfly flew over. Immediately, a “bumblebee” flew up from the vegetation and chased the dragonfly—very un-bumblebee-like behavior, indeed. When it landed on a nearby leaf, the BugLady saw that the “bumblebee” was a large Robber Fly. Robber flies are a fascinating and diverse group of avid carnivores, and some species are bumblebee mimics. Check out Mike Reese’s Butterflies of Wisconsin website for robber fly as well as butterfly information (Mike likes tiger beetles, too). 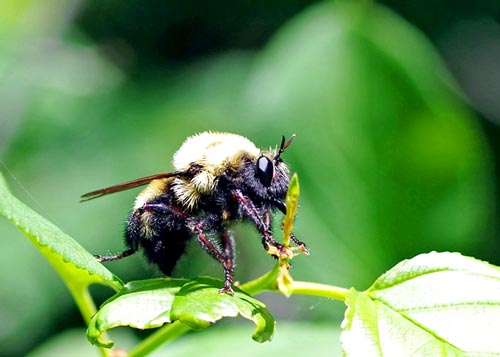 The BugLady got a call from some folks at Riveredge Nature Center recently; there were between 100 and 200 Emerald Ash Borers on the ground in a parking lot, apparently newly-emerged adults. These highly effective destroyers of ash trees were first recorded in Wisconsin on property adjacent to the Nature Center in the summer of 2008. Much credit goes to Riveredge for taking “lemons” and making an impressive educational outreach program. For the various species of ash that make up approximately one-quarter of our area trees, the handwriting is on the wall. 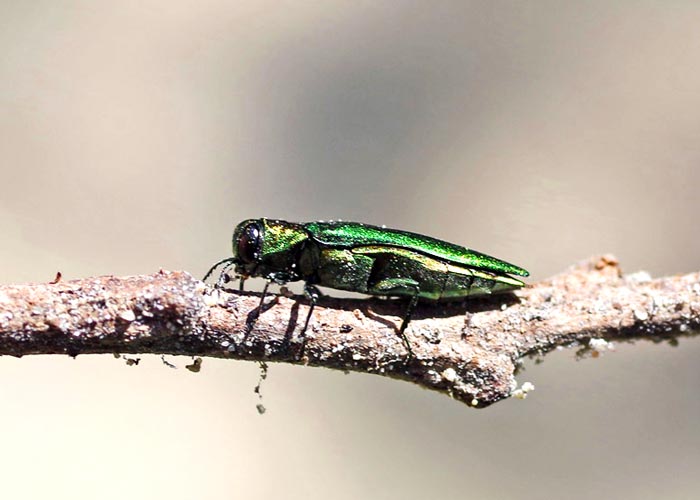 Wild Geraniums attract quite a variety of insects, some of which take advantage of their abundant supply of pollen. Mining Bees are solitary bees that stash their eggs in underground cells supplied with enough pollen to see their future larvae into the pupal stage. This bee was landing on flowers and literally rolling around in them, dislodging the pollen grains from the splitting anthers. 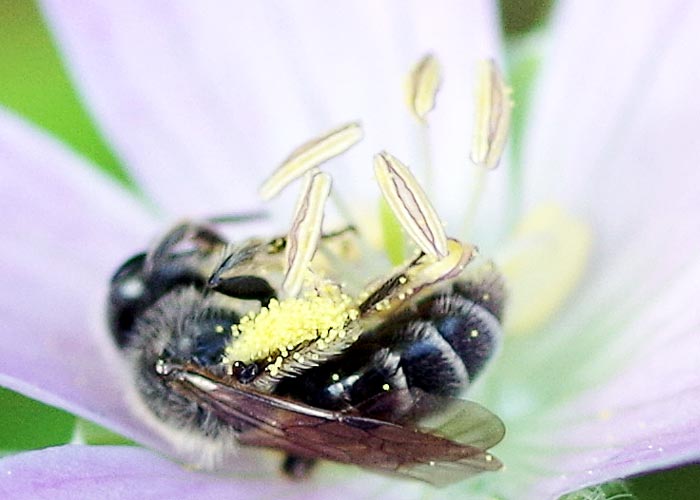 The BugLady had never seen the amazing and seriously small Hump-Backed Springtail until last year when she was taking pictures for a BOTW called “Wall Watching.” She was surprised to find them again (during the editing process, of course, when she sees what she has seen) while she was photographing this striking lichen (or maybe fungus) growing on a mossy tree stump (they’re located at 3 o’clock). Springtails mostly pass their days unnoticed, eating little bits of organic debris that they find in their environment and leaping into the air by releasing a clothespin-like gizmo under their abdomen. Mostly. 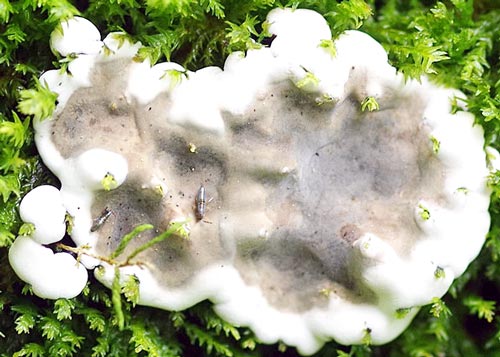 Spittlebug nymphs famously create globs of bubbles to live in. They do this by piercing a plant stem with their beak and imbibing its juices. They take in far more juice than they need nutritionally; the excess is forced through two appendages/”spigots” on the abdomen that add a bit of latex to it (for longevity) and aerate it like a tiny Cappuccino machine. The mass of bubbles provides both shelter from predators (though some have figured it out) and humidity for the soft-bodied nymph. Adults consume the same diet but no longer have the ability to blow bubbles. 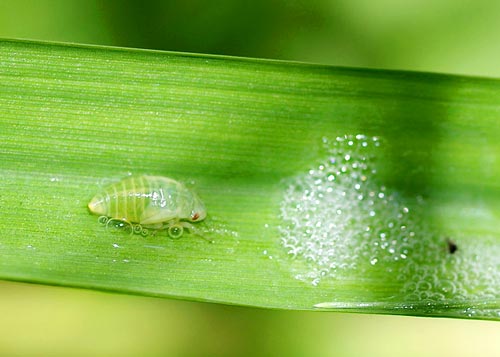 Spiderlings practice extreme togetherness, sometimes even hatching within their egg sac in winter, staying inside and eating yolk material—and each other&madsh;until the days warm. Even when they exit the egg sac and can finally stretch their legs, they often stay together for a few days before disbursing. 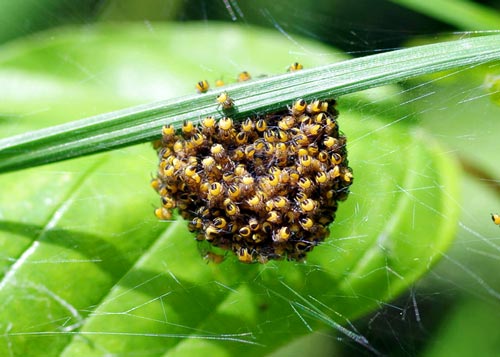 The looming presence of the BugLady caused this Jumping Spider to drop the ant it had captured. The BugLady hopes that the story had a happy ending. 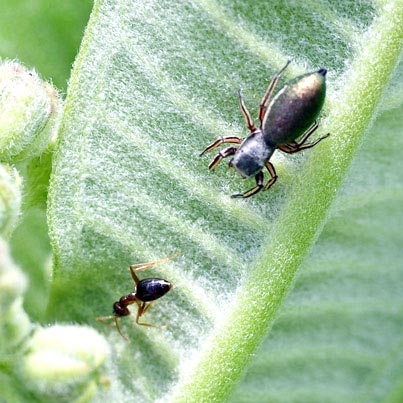 Finally, in the “Knock-Your-Socks-Off” category, we have Prepops (Prepops insitivus), a plant bug and a vegetarian. Of course, when BugFans see these flashy colors, they immediately think “Aha! Aposematic coloration!” As it happens, P. insitivus feeds primarily on black locust (though there are no Black locusts close to the BugLady’s back yard), and black locust does have toxic vegetation (despite claims by the BugLady’s husband that he used to feed it to his 4-H dairy cows). 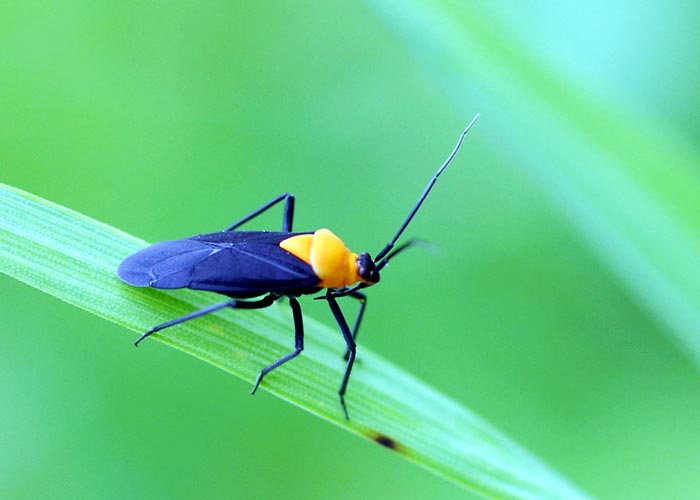