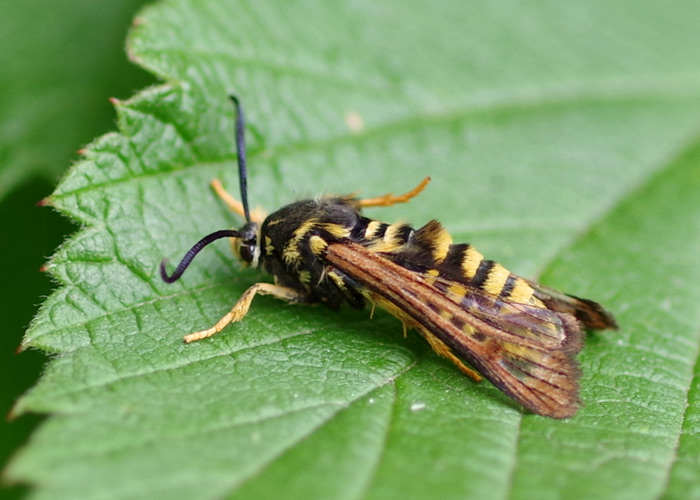 Once again, the BugLady fell for an insect’s disguise. It sure looked like a sluggish yellowjacket sitting on a raspberry leaf, and it wasn’t until she took a picture of it that she noticed all of its hairs/scales. Not a yellowjacket.

Some bugs require a lot of digging to find even the most meager pieces of their biography, but there are insects like the star of today’s show, where the board lights up with 164,000 hits in 0.51 seconds. Many of them are from University Extension services and from commercial horticultural and extermination websites across the continent.

The Raspberry crown borer/Blackberry clearwing borer (Pennisetia marginata) is a moth in the Clear-winged moth family Sesiidae (not to be confused with the chunky Hummingbird clear-winged moths, which are in the Sphinx moth bunch). We have visited the family before in the form of the squash borer moth and the eupatorium borer moth.

Quick vocabulary review: The “clear” in “Clear-winged moth” comes from the transparent areas on their wings. This scale-free area, plus their narrow wings, long legs, and banded abdomen combine to give them a wasp-like appearance (as Wikipedia says, it’s “… hymenopteriform Batesian mimicry.”). In raspberry and blackberry plants, “crown” refers not to the leafy tops of the plant but to the root crown, the area at the base of the stems/canes where they grow out of the roots. And, nota bene, there’s also a beetle called the Raspberry cane borer. 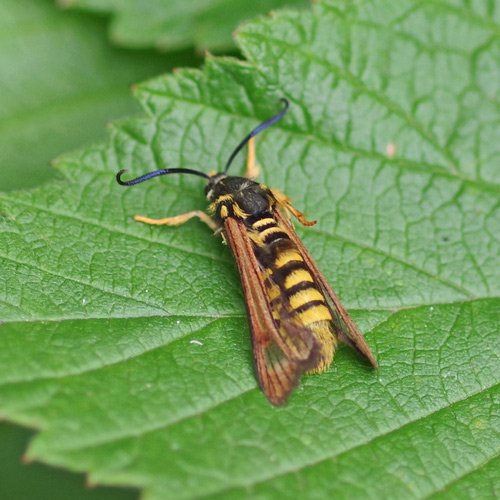 Males and females look pretty much alike, but males are smaller and are equipped with feathery antennae that allow them to pick up the pheromone signals of the females. Here are a picture of a male’s antennae, and of two moths – female on the left and male on the right.

In the southern part of its range, it only takes a year to complete its life cycle, but the larval stage may span two winters in the north, and it’s the larva that does the damage. Eggs are laid on the underside of a host plant leaf in the second half of summer, and when they hatch, the caterpillars travel down the cane to its base (or drop down on a strand of silk). There they form a blister-like hibernaculum under the bark where they overwinter. They wake up hungry in spring, and chew into new canes, which they may girdle just above the ground, killing or weakening the cane. One larva may ding three or four canes in a year. In the north, they continue making galleries in the canes after their second winter or they move to the nearby roots to feed. In any case, they pupate in summer.

One man’s trash is another man’s treasure. The Raspberry crown borer is mostly found in (and is unwelcome in) the eastern half of North America, with some populations in the Pacific Northwest. But, it was deliberately introduced into Hawaii, that great ecological petri dish, to control the previously-deliberately-introduced-and-now-invasive blackberries.

Bugs in the News VII