Isn’t this a handsome beetle!

The BugLady thinks it’s a Ragweed Leaf Beetle (Zygogramma suturalis), (if not, it’s a No-Common-Name (Calligrapha bidenticola). According to bugguide.net, the two species are “easily distinguished” by a good look at the tarsal claws and at the color of the folded, ventral edge of the elytra (hard wing covers), both of which are tricky to see in pictures. The striping on both species is variable and overlapping and is not a definitive characteristic). Both are found from the Great Plains to the Atlantic and both have similar food preferences. They are in the Leaf beetle family Chrysomelidae, and as the name suggests, are vegetarians. 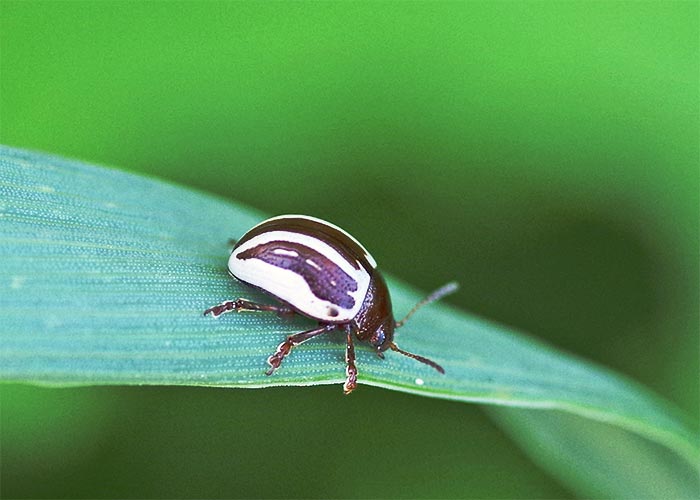 There are about 100 species in the genus Zygogramma, but only a dozen or so live north of the Rio Grande. Relatively little is known about them as a group—as one author pointed out, if an insect is neither charismatic nor economically important, it probably hasn’t been studied much. The RLB is a native North American that has found its way to other corners of the globe, sometimes with a little help from us.

Quick and dirty RLB biography: eggs are laid in twos and threes on the underside of leaves in summer; a female averages 13 eggs per day and 165 in her lifetime. The larvae feed on leaves gregariously as young larvae until they use up their natal leaf, and then they go their separate ways (‘Pere and Mere’ eat both the flowers and leaves of ragweed and some other members of the Aster family, and they are often seen on goldenrod flowers in late summer). The larvae enter the soil to pupate as the weather gets cold and emerge as adults in late spring, when the ragweed is a few inches tall. There are two generations a year in northern Ohio.

For a blog about RLB larvae with some great pictures, see tywkiwbdi.blogspot.com. The larva of the Tortoise beetle, of recent BOTW fame, discourages predators by carrying about a “fecal shield.” The RLB larva outdoes the TB larva by regurgitating its most recent meal all over its head and simultaneously releasing a “large quantity of dark brown, probably odorous fluid” from the other end when alarmed.

Google the Ragweed leaf beetle and you end up with dozens of articles about its use in the control of ragweed around the world. It has been exported to India to control a North American weed called Santa Maria feverfew that is a pest there, and to Russia and Central Europe to control common ragweed. While the beetle does feed on ragweed in its adopted countries, the reviews have been mixed. One glowing report says that “In one locality at Stravropol the insects were concentrated in a narrow band at 5,000 individuals per m3, which completely destroyed all the ragweeds as it moved across an infested field at a rate of 3 me per day…The controlling action of these feeding fronts on ragweed, greatly increased yields of sainfoin, maize and alfalfa 2-3 times (Goeden & Andrés 1999). Another study suggested that crop rotation slowed the establishment of the beetles—results are great right after a slew of “farm-raised” RLBs are released but they may have trouble maintaining themselves in the needed numbers.

Still another study showed that while they damage ragweed by feeding on it, female RLBs prefer to oviposit on undamaged or only-slightly-damaged leaves. The more damage the RLBs do to a field full of ragweed, the less likely they are to lay eggs in it, and some females may stop laying eggs altogether. Scientists theorize that this behavior protects the beetle from the population crash that typically follows boom-year feeding.

Success breeds moderation—not what you’re looking for in a biological control agent.