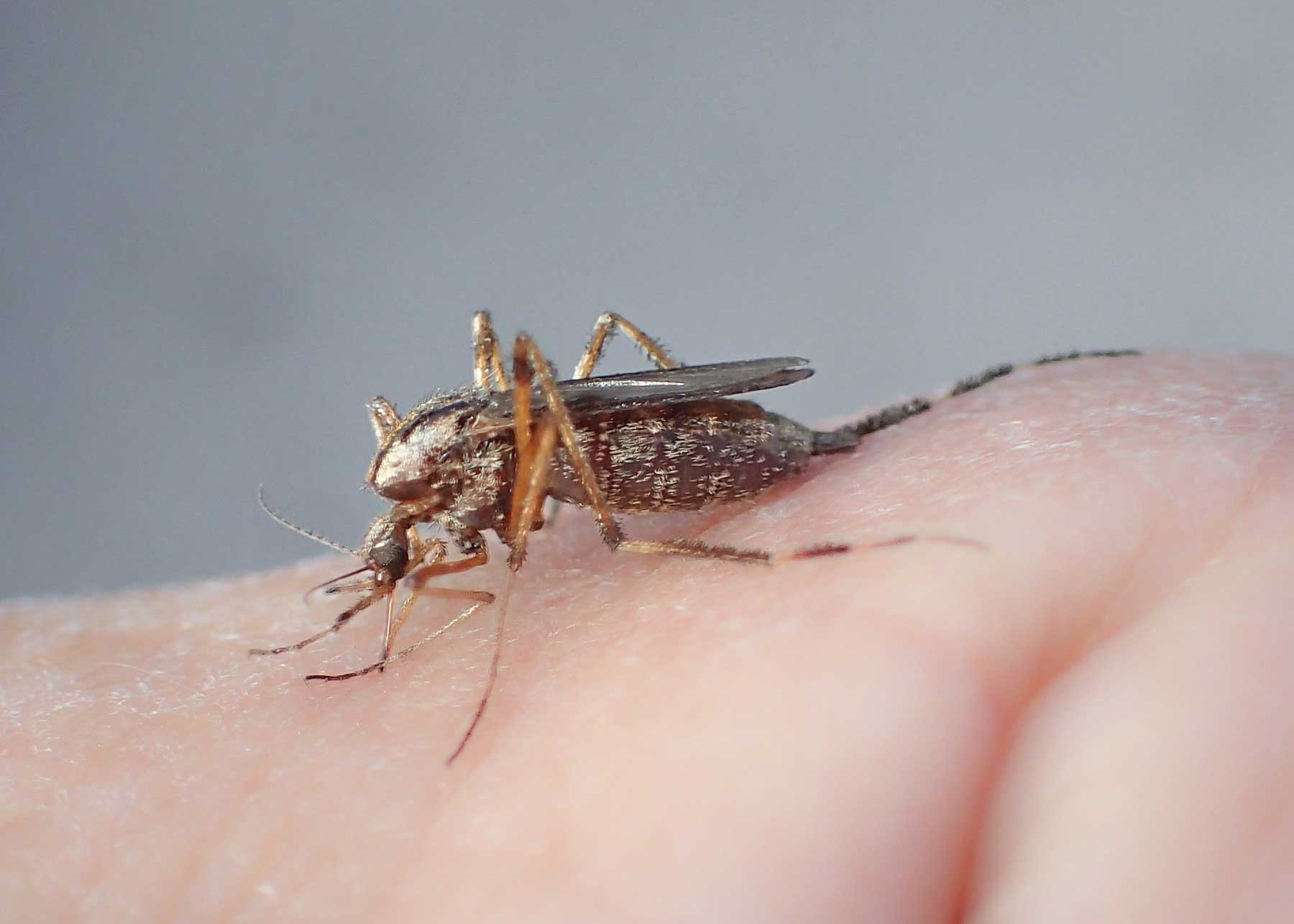 Remember the clouds of little floodplain mosquitoes in September of 2018?  Floodplain mosquitoes take advantage of pools left by seasonal rain, and August of 2018 was soggy (the BugLady collected more than seven inches of rain in her rain gauge that month). Populations of most dragonflies were in their fall decline, so no help from that quarter, and outdoor events in September involved lots of swatting.

For a refresher course on mosquitoes, see our previous post on The Mighty Mosquito.

The BugLady guessed the genus, and an entomologist confirmed that her mosquito is “consistent in appearance with Psorophora ciliata, our largest mosquito in the state, though not a commonly encountered one” (none of the other dozen-of-so members of the genus has erect “hairs” on their hind legs). The SLG is in the fly family Culicidae.

Sadly, Shaggy-legged Gallinipper is not the officially recognized name for Psorophora ciliata (one site offered a pronunciation—sore AH fur uh   silly AHT uh).  Neither is “syringe with wings,” which is what a reporter from the North Country News called it a few years ago. According to bugguide.net, “The word gallinipper originated as a vernacular term in the southeastern US referring to ‘a large mosquito or other insect that has a painful bite or sting’ and has appeared in folk tales, traditional minstrel songs, and a blues song referencing a large mosquito with a ‘fearsome bite.’” Gallinipper seems like the kind of name that’s whispered around campfires in the dark.

This is a whale of a mosquito (the BugLady’s first impression when she saw it on her hand was “Wow!” not “ouch”). Males have large, feathery antennae that allow them to detect the whine/vibrational wave pattern of her wingbeats. Her simple antennae are sufficient to lead her to a source of blood, and her yellowish proboscis is tipped with black. For more pictures, visit this entomology site.

The SLG is found over a good chunk of the US east of the Continental Divide, though it has Southern proclivities and occurs as far south as Argentina.

It’s an uncommon mosquito that is more abundant in wet summers. Like other floodwater or “new water” species, SLGs gamble. Rather than using established wetlands, they lay their eggs on damp or low grassy ground that may flood in a big rain, and the eggs hatch when water covers them. The fact that their eggs are designed to withstand long periods of desiccation improves their odds tremendously (an accumulation of years of plant seeds on the ground is called a “seed bank;” one source referred to the SLG’s reproductive strategy as an “egg bank”). A number of the hits the BugLady found when researching the SLG chronicled their appearance in the wake of hurricanes and floods in the vein of one disaster following another.  Because their natal pools are transient, they must telescope their growth period, emerging as adults in just under a week after the eggs are inundated.  They overwinter as dormant eggs.

SLG larvae are aquatic, and they’re typically the largest mosquito larva in their neighborhood. Immediately after hatching they feed like other mosquitoes by filtering tiny bits of organic matter. But as they molt and grow, they become carnivorous (an uncommon habit among mosquitoes), pursuing other aquatic invertebrates, including other mosquito larvae. For this reason, they have been studied as a possible biological control for disease-carrying mosquitoes (apparently SLGs can carry encephalitis and West Nile virus, but there’s no evidence that they transmit them), however 1) SLGs are generally too scarce to be effective; and 2) SLGs themselves bite and annoy people. Adults feed on nectar, and Mom, of course, must have a blood meal in order to form her eggs. By most accounts, she targets some livestock (the ruminants) and deer and a number of small mammals like raccoons, but she will also select humans.

A number of sources spoke of the aggressiveness of the SLG and of its painful bite, which the BugLady does not recall as being extraordinary.

Local maritime enthusiasts please note—a schooner by the name of the Gallinipper sank in Lake Michigan off of Manitowoc County in a white squall in 1851 (the state’s first known commercial shipwreck). Apparently an ill-fated ship, she was originally christened the Nancy Dousman but was renamed after she sank (the first time) in the mid-1840’s. In the run-up to her final immersion, she foundered in 1848, ran aground in the Milwaukee harbor in 1850, and sank in the Milwaukee harbor a few months before she sank for good. You can visit her historical marker in Sheboygan.