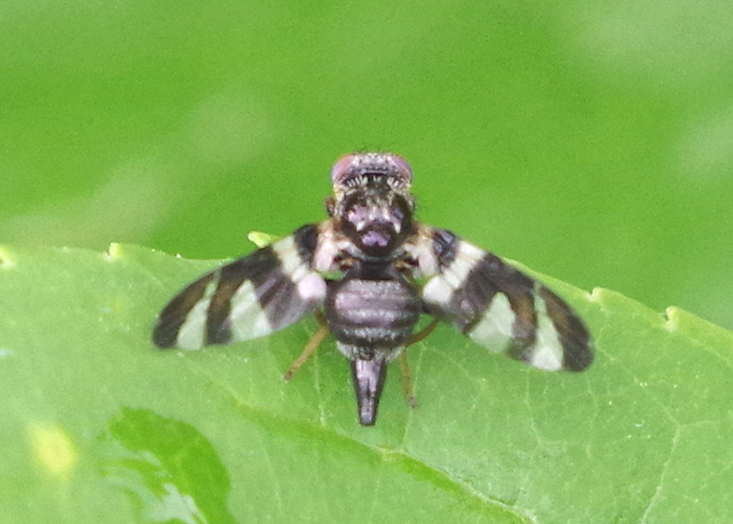 The story of this fly (whose name is considerably longer than the fly itself) demonstrates why the BugLady loves BOTW. Could she dig up a lot of details about how this little beauty lives its life? She could not. But she found two interesting side stories about it.

As always, our first episode of the New Year is vocabulary-rich. 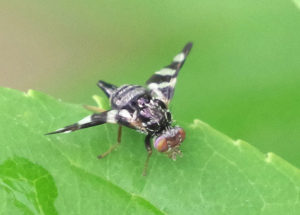 Procecidochares atra is a true fruit fly in the family Tephritidae —not one of those red-eyed, flying lab rats that circle your bowl of grapes in summer, or that escape from confinement and live in labs in perpetuity. Those are more properly called Pomace or Vinegar flies, family Drosophilidae. Because of the simplicity of their DNA and the ease in raising them, some Drosophila are extraordinarily well-studied and experimented on.

Fun Drosophila Fact: according to Wikipedia, if a female Drosophila melanogaster sees a female larva of an endoparasitic wasp, she will start laying her eggs on rotting fruit or some other alcoholic substrate. Why? Because her offspring will imbibe it, and wasps have a low tolerance for alcohol. 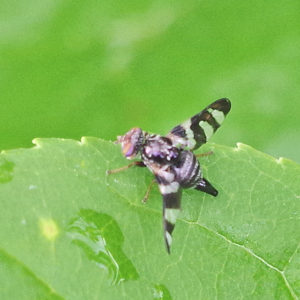 Tephritid flies are also called Picture-winged flies and Peacock flies, but those names are more properly applied to other tiny flies. Those fancy wing patterns are used both in courtship and in defense (more about that in a sec). Wikipedia says that the females use their telescopic ovipositors to insert their eggs in living plant material. The larvae of most species are vegetarians, they feed on plant tissue that the eggs are deposited in, or like the genus Procecidochares, they make a gall and feed, and finally pupate inside it . Some family members are food specialists while others enjoy a more varied menu; some are agricultural pests, and others help to control agricultural pests. Adults feed blamelessly on nectar, pollen, honeydew, and decaying vegetation.

Most, but not all, genus members are univoltine (one generation per year), but Procecidochares atra is bivoltine (two generations). The spring generation forms a stem gall near the base of an emerging goldenrod, and that gall is polythalamous (containing multiple larvae, as many as 21). Galls of the late-summer generation are formed above mid-stem, often on the buds , and are monothalamous (each houses a single larva). The galls are leafy rosettes. The photographer of this gall bagged it to see what kind of fly would emerge and got wasps instead – the wasps had probably parasitized the larva of the gall-making fly (unless they were inquilines). It’s probable that the adults overwinter and lay eggs as goldenrod starts to grow in spring.

But, as author Isaac Asimov once wrote, “The most exciting phrase to hear in science, the one that heralds new discoveries, is not ‘Eureka!’ but, ‘That’s funny….'”  Researchers Phillips and Smith studied Procecidochares atra, noting the seasonal and structural differences in its gall making habits and identifying two new host species, Canada goldenrod and horseweed (Erigeron canadensis). To complicate things even more, the late summer gall they found on horseweed was a stem gall located inches from the ground, not a bud gall.

What’s going on? The researchers suspected that they might be dealing with what is called a “cryptic species,”—a described species that’s actually made up of several distinct species that don’t interbreed but that look (to us) identical. This would explain the differences in hosts and seasons and gall formation. Although (using the tools available in the 1990’s) they were “unable to differentiate this specimen [on Erigeron] morphologically from other specimens of Procecidochares atra,” they didn’t rule out the potential for two or more cryptic species, separating the spring, fall, and Erigeron gall makers. And, of course, they noted that there needed to be a “systematic revision of the genus.”

Yes, males use their patterned wings like semaphore flags in courtship, to signal to females, but tephritids also use them in defense. In its write-up about the family Tephritidae, bugguide.net  says

Researchers Greene, Orsak, and Whitman studied a tephritid in a different genus, Zonosemata and wrote. “When disturbed, these flies hold their wings perpendicular to the body and wave them up and down; this resembles the agonistic leg-waving behavior typical of the jumping spider. Zonosemata flies initiate this display when stalked by jumping spiders, causing the spiders to display back and retreat.”

A New York Times article about the study elaborates “These spiders use this aggressive behavior to warn other members of their species to stay out of their territory.

When the fly flaps its wings, it fools the spider into thinking it has entered the territory of another spider. As Mr. Greene put it, the fly is sending the counterfeit message ‘’I am a mean jumping spider, so come no closer.’”

For the long version (if you haven’t used up your free NYT reads for the month) see https://www.nytimes.com/1987/04/28/science/fly-mimics-attakcing-spider-to-save-its-skin.html.

A jumping spider may back away from the encounter, but the subterfuge doesn’t work on other predators, even on non-jumping spiders. The team speculated that even though this behavior hasn’t been observed a lot, it may be more common that we think.

Confession – the BugLady has a bit of trouble seeing a spider in the fly, but if she were ¼” long, it would probably be easier.