Predaceous Diving Beetles belong in the order Coleoptera (sheath-wings), a reference to the firm, front pair of wings—the elytra—that cover and protect the membranous second pair of [flying] wings. More than a quarter of all species of living things that have been described are beetles (they have been around for 225 million years, plus or minus), and they outnumber vertebrates 18 to 1. There are 24,000 beetle species in North America alone. According to Sue Hubbell in Broadsides from the Other Orders, when asked what his studies had taught him about the nature of his Creator, the great British biologist J.B.S. Haldane is said to have replied that “God has an inordinate fondness for beetles.” 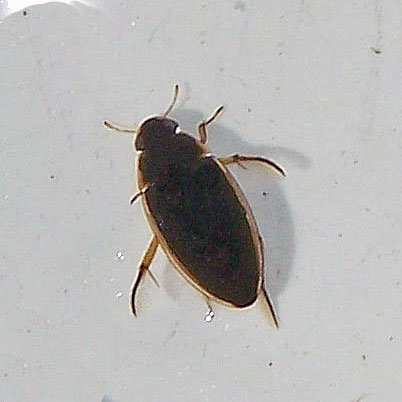 Only about 4% of beetle species are aquatic, but if you do the math, that’s still a lot of beetles. Predaceous diving beetles (PDB) are in the family Dytiscidae, the largest family of aquatic beetles. Typically, they live in the shallow, still waters of lakes and ponds or in the pool areas of streams. Although some are pretty small, our typical PDBs are an inch to an inch-and-a-half long, oval, with slender antennae and with dark with buffy/green edging on the elytra. Their powerful, hairy, oar-like back legs are perfect for swimming, and they are further streamlined because they tuck their other 4 legs into grooves along their sides as they swim.

PDBs have an off-again-on-again relationship with water. Eggs are laid on/in plants above the waterline in early spring. When they hatch, the larvae drop into the water (larvae may grow up to be 3” long, and they are aptly nicknamed “water tigers”). Mature larvae crawl out of the water to pupate in damp chambers on the shoreline. They emerge as adults to reenter the water (they are good fliers and are attracted to lights at night, but they are awkward walkers). Both larvae and adults may be found under the ice in winter.

While underwater, PDBs carry an air supply with them. Larvae take air into their bodies through spiracles (pores) at the tip of their abdomen. Adults also back up to the surface film, but the air they capture is stored under the elytra. They can stay submerged for a long time (“long” being defined by one author as 10 minutes and by another as 36 hours!).

As their name implies, they are carnivores, catching their food by stealth or by active pursuit. The voracious immatures (piercer-predators) and adults (chewers) have, let’s face it, gruesome eating habits. Larvae have sickle-shaped mouthparts that have a channel in the inside surface. They grab their prey with their mouth, and a “brown digestive juice” flows through the channels into the hapless snail, small fish, tadpole, leech or insect (including other water tigers). This both kills and partially digests the prey, whose now-liquid tissues the beetles then extract. The adults have chewing mouthparts; they hold their prey with their legs and tear pieces off with their mouth. Adults will also feed on carrion. 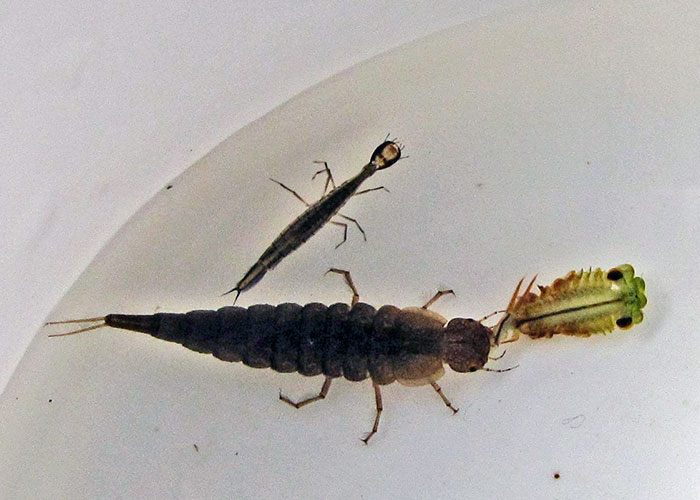 Water tigers are considered important players in mosquito control, but, as Ann Haven Morgan points out in her Field Book of Ponds and Streams, dytiscid larvae share the sunny shallows with tadpoles, and they undoubtedly have a major impact on amphibian populations. PDBs are eaten by fish, raccoons, skunks, reptiles, amphibians, and some herons. The BugLady is really surprised that there are not more horror movies featuring mutant aquatic insects—move over, Mothra. Hubbell tells us that, in recognition of their (and our) place in the great scheme of things, some South American Indians name as their Creator a very large beetle. J.B.S. Haldane would probably approve.