Today’s star flew away from the approaching mower when the BugLady was mowing the lawn. The BugLady got all excited because although she has seen an occasional egg case (an ootheca), your vocabulary word for the day. The egg cases are about half the size of a ping pong ball and they look like gray, dried shaving cream and they’re attached to plant stems), this is the first adult Praying Mantis she has seen in Wisconsin. And she got a 10 minute “Photo-op Break” from mowing, too! 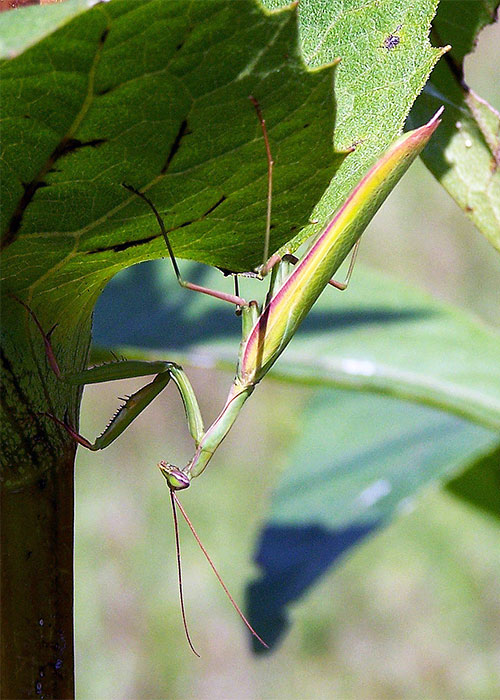 Mantises are in their own order Mantodea; older insect books group them with the grasshopper bunch. There are small, native mantises, but this isn’t one of them. This looks like a Chinese Mantis; the other exotic mantis, the European Mantis, has a teeny, tiny black and white bulls-eye spot near its armpit. There is momentary confusion about their name—prAying mantis, because of their reverent posture, not prEying mantis for their eating habits.

The BugLady cannot testify about their religious inclinations, but they are superbly adapted as predators. The serrations/spines on the second and third sections of their abnormally long front legs interlock when they grab their prey, making escape impossible. Their eyes are situated so as to give them binocular vision; like hawks and owls they can see forward with both eyes and judge the distance to their prey. Also like the owl, they can rotate their heads significantly (but not like a corkscrew). 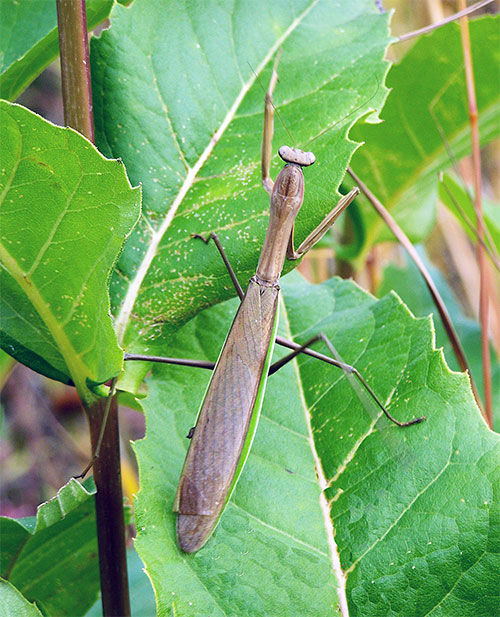 According to the wonderful Discover Nature around the House by Elizabeth Lawlor, when an insect is beyond the mantis’s considerable reach, the mantis engages in a slow, swaying dance, making eye contact with its proposed meal, edging forward as it sways, until it is suddenly in arm’s reach. People have observed that the BugLady presents a similar image as she photographs insects. It targets insects, spiders and other invertebrates, but tropical mantises have been observed holding hummingbirds, small snakes, bats, and baby mice.

Check out Lawlor’s book for a description of the development and “birth” of the young mantises.

Mantises are imported as biological pest controls, and that, they are very good at (“Crying, what I do is me, for this I came.”) (G. M. Hopkins’ As Kingfishers Catch Fire, Dragonflies Draw Flame). Anyhow, the Catch 22 with Mantises is that no one bothered to tell them the distinction between your “good bug” and your “bad bug” and they scarf all, indiscriminately. 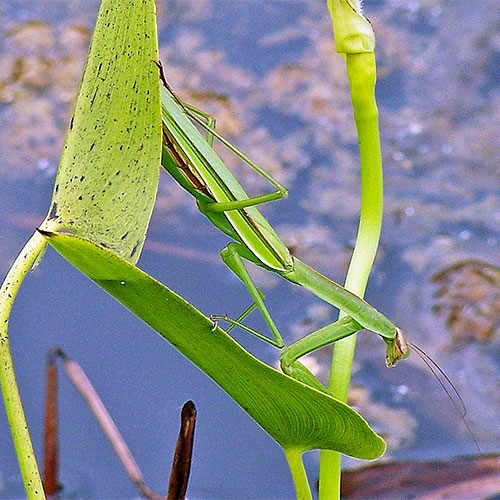 Females are famous for eating their mates, as we all saw on that memorable “Buffy the Vampire Slayer” episode, but this behavior is most often reported from observations of caged pairs, where the male can’t escape after mating. This is, undoubtedly, a metaphor for something, but the BugLady is so not going to go there.