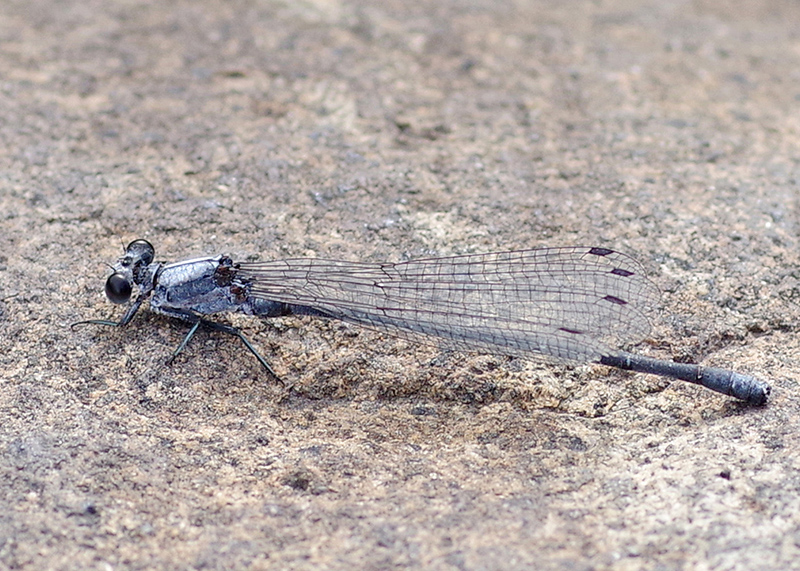 The BugLady is a frequent visitor to the Milwaukee River at Waubedonia Park in July, because that’s where the magic is. Arrow Clubtails make their maiden flights up into the trees just 45 minutes after emerging from their nymphal skins, leaving the skins – exuvia – as signs of their passing. Silvery, new Stream Bluets cling to plants while their elders fly in tandem; Common Whitetails chase everything; and incomparable Ebony Jewelwings teeter on reeds. And the number of American Rubyspot pictures that she’s taken there this year may be a personal best. 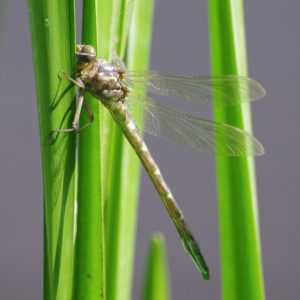 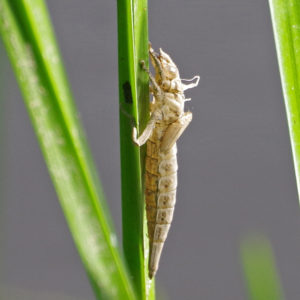 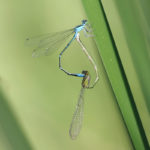 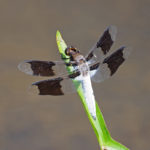 But, oh my, the Powdered Dancers!

The first time she walked the shoreline six years ago, the river was low, and mats of Potamogeton (pond weed) undulated on the surface about 10 feet offshore. And on those mats were ovipositing pairs of Powdered Dancers – slender damselflies taking their chances on a big river.

Along with bluets, sprites, and forktails, dancers are members of the Pond/Narrow-winged damselfly family Coenagrionidae. At 1.5” to 1.7” long, Powdered Dancers (Argia moesta) are both the largest in their genus and the largest in their family. Argia, inexplicably, comes from an Ancient Greek word meaning “laziness” (but they aren’t), and “moesta” meaning sorrowful, a possible reference to wearing ashes in mourning. 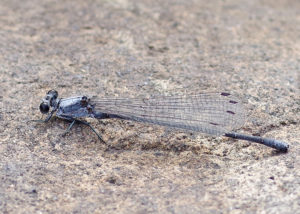 Don’t look for Powdered Dancers around the edge of a pond; this species is found next to running water or on the shores of large lakes, especially where there are emergent rocks to sit on. Their color camouflages them there and so does their habit of sitting with their wings folded at their sides rather than over the abdomen, giving them a lower profile. 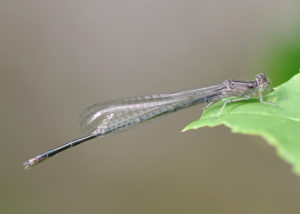 Pruinosity puts the “powder” onto Powdered Dancers. As they mature, males produce tiny, waxy plates that coat their exterior and turn them from dark to pale. (See the first picture in this series ). Females come in brown and blue morphs, and they also change color during their three or four weeks as adults. Blue morph females look like Blue-fronted Dancers , and brown-form female Powdered Dancers  look like brown-form female Blue-fronted Dancers .

Paulson, in Dragonflies and Damselflies of the East, speculates “Perhaps pruinosity confers resistance to high temperatures, as this may be the only odonate active at streams on sunny days exceeding 37 degrees C.” (When the BugLady was in grade school in the ‘50’s, her teachers said “Learn the metric system – the US will be switching any day now.” 37 degrees is a scorching 98.6 degrees F.) 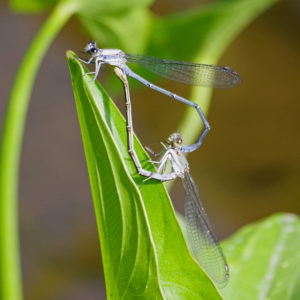 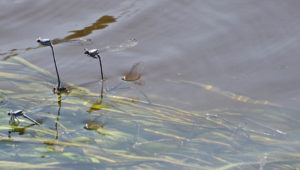 In many species where the male contact-guards the female (maintains his hold on the back of her head) as she descends to insert eggs into/onto underwater vegetation, he is not quite as committed to total immersion as she is and will release her if she goes too deep. Powdered Dancer males seem to be all in. It’s not clear why – the dangers he is guarding her from are in the air. Look at the picture that shows a few partly-submerged pairs at the left, and then look to the right for several pairs that are completely underwater (When he saw the picture, BugFan Bob said that there are some “Maybe this is deep enough” conversations going on down there… he said some very scholarly things, too). 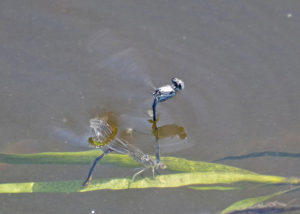 Pairs can stay under for an hour or more and have been found more than a yard (meter) below the surface. The naiads hide under stones and debris and overwinter in a late-stage, crawling out of the water to emerge as adults early the next summer.

Powdered Dancers are active, but they stay at home in a relatively short stretch of the river bank; and while females and immatures may fly inland, mature males seldom stray far from the water.

Damselflies eat other invertebrates, both underwater as naiads and in the air as adults. Female Powdered Dancers are avid hunters whose diet includes other damselflies, even other Powdered Dancers.

Fun Powdered Dancer Fact: Researchers in Ontario found midge larvae hitchhiking (harmlessly) on Powdered Dancer naiads, a phenomenon called phoresy. The probable advantages for the midge larvae are a larger, more stable port in a current, and they don’t have to use as much energy moving around. The damselfly naiads are not affected by the arrangement.