Novice BugFans please note that the BugLady’s definition of “bug” leans more toward that of a first grader than of an entomologist. BOTW takes occasional forays out of the world of the six-legged to celebrate non-insect “bugs.” Today’s bugs are of the “one-footed” tribe.

Pond snails are in the phylum Mollusca, soft-bodied animals that manufacture their own shells. Fellow Mollusks include clams, oysters, sea slugs, squid and octopi (OK, some “shelled” critters have no shells, or have internal shells; the intricacies of their classification are way beyond the Bug Lady’s pay grade). Under the Great Mollusk Umbrella, snails are found in the class Gastropoda (“Belly foot”) along with slugs, limpets, moon shells, whelks and conchs. Gastropods began life in the ocean, some 500,000,000 years ago, plus or minus, and today’s representatives are found from deep ocean trenches to mountain tops and from deserts to mudflats to gardens. North America boasts more than 500 species of freshwater snails. 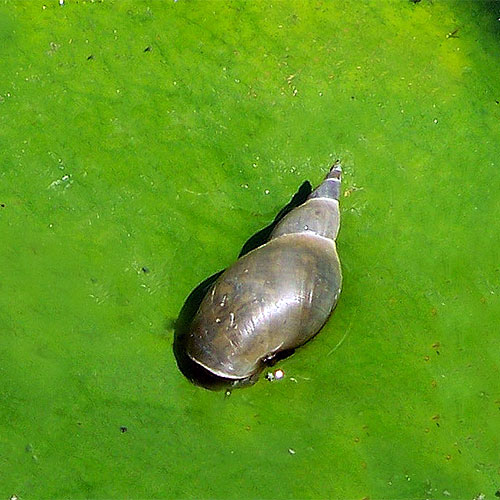 The numbers: there are some 100,000 species in the class Gastropoda worldwide, and a very diverse bunch they are. That number, subject to argument, may go as high as 200,000 when all the outlying Gastropods are rounded up and identified. As a class, they are second only to class Insecta, based on the number of species, (they are a distant second—there are a million-plus named insect species, and some scientists feel there may be another million awaiting discovery). Around 80% of Mollusks are Gastropods, and some 75% of Gastropods are aquatic, dwelling in fresh water, in oceans or in the brackish marshes that form a lip between land and sea.

Snails, famously, live in a mobile home that is produced by an organ called the mantle, a thin layer of multi-tasking tissue that secretes the limey material that hardens into the shell. Besides making the shell, the mantle bears cilia (hairs) that wave, creating a mini-current that moves mini-food to the snail’s mouth. Folds in the mantle create pockets that are used as gills in some species of snail (some snails breathe via gills; others, called the pouch snails, breathe with a lung-like organ), and a snail’s vital organs are also found within the mantle cavity.

Shells are spiral cones, with an apex on top and an opening at the bottom, and with the snail’s equally twisted body filling the shell right up to the apex. Some shells are left-handed and others are right-handed (with a shell in the palm of your hand, its apex pointing “up” and the opening facing you, which side is the opening on?). Shells are heavy, relatively speaking, which is why snails move slowly. Not all ponds welcome snails equally—water that is soft or is acidic dissolves snail shells, but snails that live in calcium-rich water grow thicker shells. Snails don’t care for temperatures that are too warm or too cold, and they may move up and down vertically in a pond until they find “just right.” 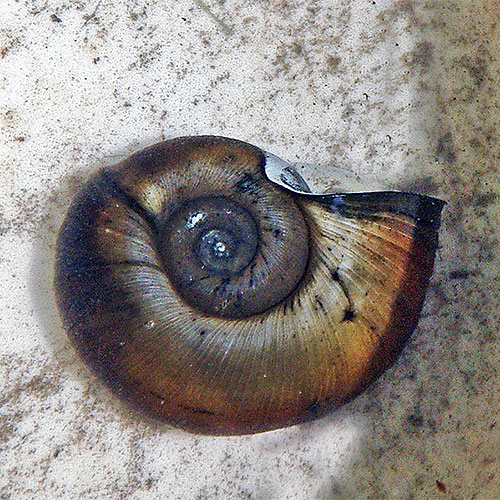 Also famously, snails move through life on a carpet of mucous, which lubricates their road and seals its cracks, easing the journey and increasing a snail’s stick-to-itiveness. With the aid of the marvelous mucous, snails can scoot over the topside or the underside of the water’s surface film, cling to plant stems, navigate pond floors without sinking into them, and even dangle, suspended from a plant by a strand of slime.

Senses? A snail can’t hear, but it can “see” (some can only tell light from dark, but others have more complicated eyes). A snail has tentacles on its head that look like an insect’s antennae. Aquatic snails have two tentacles and land snails have four, with the eyes located at their tips (land snails) or at their base (aquatic snails). Snails depend on their senses of smell and touch and on chemosensory organs to navigate their world.

Their role in life? To eat and be eaten, and then to be recycled, just like the rest of us. Pond snails generally live in shallow water (up to 6’), with species separating out based on substrate/habitat preferences. Various species of snails feed on detritus (particles from disintegrating organic material—animal or vegetable), break down dead leaves, “sandpaper” algae off of a variety of surfaces, or rasp off bits of living plant parts. Food that is loosened by the rasping action of their teeth gets pulled back into the mouth, sometimes with a few very small invertebrates attached for garnish. Snails are said to improve their habitat by their gardening. The judicious rasping of algae makes for more algae and also prevents a build-up of dead algae, which ultimately is good for the pond weeds and which provides food and habitat for other pond critters. On the other side of the equation, snails provide escargot for a wide range of aquatic critters, from leeches to insects (dragonfly naiads and giant water bugs) to fish, reptiles, amphibians, ducks, and a few mammals like muskrats. Humans should consume them at their own risk. Freshwater snails host a variety of internal parasites (including the larva of a trematode worm that causes “swimmer’s itch”), some of which they trade back and forth with people at various parts of the parasite’s life cycle.