The star of this episode, an impressive beetle (between ¾” and 1”) with “don’t-mess-with-me” mandibles, languished for some time in the BugLady’s “Future BOTWs” photo file. It showed up on the front porch and spent the night in the refrigerator before having its portrait made. Sluggish at best, its “warmed-up” behavior didn’t differ much from its “cooled-down” behavior.

Once she discovered its identity (she had been searching the Stag beetle family futilely), the BugLady found an abundance of names—heartwood borer, pole borer, ash root borer, and chestnut telephone borer. The pole borer is in the long-horned beetle family (Cerambycidae), a family with more than 950 species in North America. Cerambycid larvae/grubs have their own name—round-headed borers—so named because of the round exit holes they create in trees. Male Cerambycids are famous for the squeaks they make by rubbing their head against their thorax. 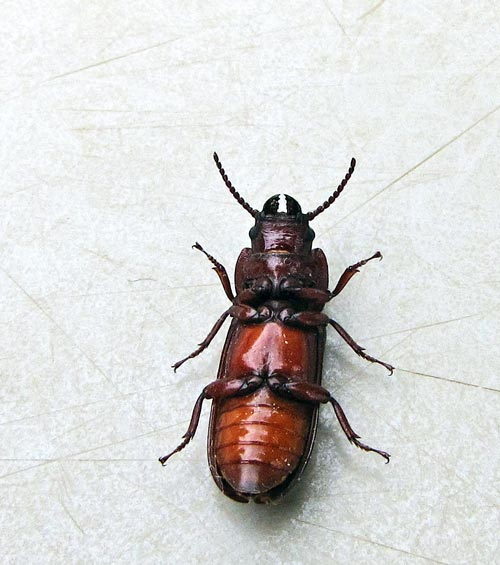 This pole borer is probably Parandra brunnea. Parandra (aka Neandra) are “aberrant” long-horned beetles that were once placed in their own family. The horns (antennae) of Parandra are short compared to those of their long-horned brethren and are “serrate”. The “main-stream Cerambycid” pictured here begins to show the difference, but the antennae of many Cerambycids are twice as long as their bodies and pinned specimens often look like entrants in a fancy moustache contest. Sporting breakable body parts like that, it’s clear that it is not the adult stage that has earned the name “borer.”

The pole borer can be found during warm months—even marginally warm ones—in/near woodlands in the eastern half of North America. It has the distinction of having been exported to Europe, arriving in Germany during WWI or possibly earlier.

A female pole borer (this individual looks like a female; males have even heavier mandibles) excavates clusters of holes in wood, probably using both ends, her mandibles and her ovipositor. She deposits a single egg per hole. The larvae start at ¼ inch and grow to 1 inch, chewing tunnels called galleries into crossties, telephone poles and structural wood and into trees that are already wounded and starting to decompose. The larvae look like over-sized Emerald Ash Borer larvae (of previous BOTW fame); it always amazes the BugLady that a critter that is so soft and squishy-looking can tunnel in wood. Their tunnels often take them into healthy tissue, and moisture, fungi and other instruments of decay follow them through the tunnels. Pole borers may help to usher in the first phases of decomposition, but they are not around when the final curtain falls, preferring firm wood over punky. Adult pole borers may shelter under the loose bark of dead trees (they are nocturnal/crepuscular), and one source said that if they lay their eggs near existing galleries, the journeys of their offspring are “jump-started.” 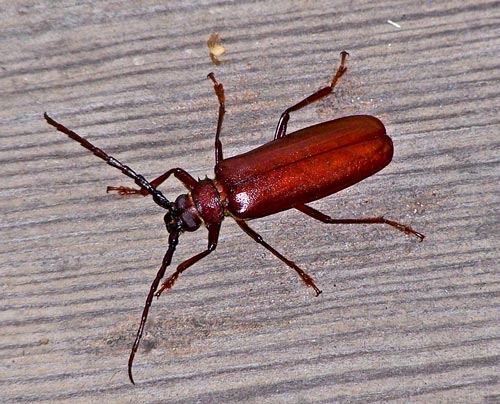 Boring is a tough gig and Cerambycids do it very well indeed, but it requires a variety of adaptations of the larvae that practice it. A pole borer larvae is legless, but its body has warty lumps that allow it to stay in one spot while feeding. As a cerambycid larva moves forward in its tunnel, it leaves behind a trail of powdery “frass” (BugPoop). Initially, it will remove frass by pushing it out the “door,” but as the larva prepares to pupate, it walls off its pupal chamber with frass, and the pupal case reposes on a bed of it. While the majority of insects spend only a few days/months as larvae/nymphs, a wood borer larva often spends a second summer in the tunnels it makes. After it metamorphoses into an adult, it follows the galleries out into the sunshine, where it may live more than a year as an adult. And then there’s their food; wood/cellulose, roughage, insoluble fiber. In order to digest the indigestible, the pole borer gets an assist from fungi it ingests while eating wood (yes, when scientists fed fungus-free wood to larvae, they could no longer digest the cellulose).

When the BugLady started researching the pole borer, she found many pictures in picture galleries and in a few “Forestry Pest” sites, but very little information. Then she got to some of the later search pages and found—HISTORY! Entomology papers from 1909. Chestnut trees (not today’s unrelated and alien horse chestnuts, but the real McCoy). And Ivory-billed Woodpeckers. The pole borer story, it turns out, is ripped not from the headlines but from the history books. 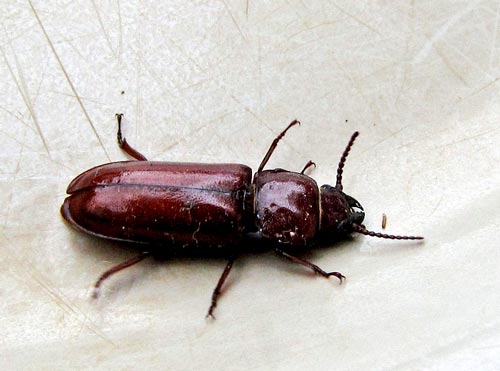 Our pole borer caused quite a stir when, in 1906, it was found in telephone and telegraph poles in Baltimore, Maryland. It sounds like little was known about the beetle before then, though it had been named more than 100 years earlier. And there it was, tunneling away in telegraph poles made of American Chestnut. One source noted that the original range of the beetle was probably pretty similar to the range of that forest titan. For an account of the demise of the American Chestnut, arguably the most important forest tree in North America, check out Wikipedia. The Chestnuts did not survive the blight, except in a few secret enclaves. The generalist pole borers, however, at home in pine, a variety of deciduous forest trees and in fruit trees (its forays into orchard trees were remedied by scraping out the tree’s heartwood and replacing it with concrete) survived the disappearance of the chestnut.

About those telegraph poles (younger BugFans can do their own search to find out what those were), most of the galleries were made in a zone from about three inches above to about three inches below the soil surface where the environmental conditions were ideal for the larvae. Due to the honeycomb of tunnels, the poles were breaking off at ground level. In 1909 one line of poles, 40 miles long, with 36 poles per mile, was inspected and found to have 600 defective poles with 95% of the damage due to insects.