The Plume Moth is a smallish moth (½” to 1 ½” wingspread) that is pretty easy to walk past, since it’s disguised as a piece of dried vegetation and is assuming a distinctly un-moth-like pose. Kaufman and Eaton, in the Field Guide to Insects of North America, liken the shape to that of an airplane.

There are 160 species of plume moths (more or less) in North America north of Mexico, with 8 or 10 more awaiting classification. All are known for their slim bizarre wings, which are deeply divided into fringed lobes. The hind wings generally have three lobes, and the forewings two, but when they are at rest, they roll the lobes of each wing together until they resemble twigs (one reference calls them “spars”). A different branch of the family has pleated wings that look like an opera cloak. They are not strong fliers, and they are usually found near the plant that feeds their caterpillars. Plume moths have long legs, often decorated with spines at the joints, but the BugLady didn’t find any explanation for the spines. 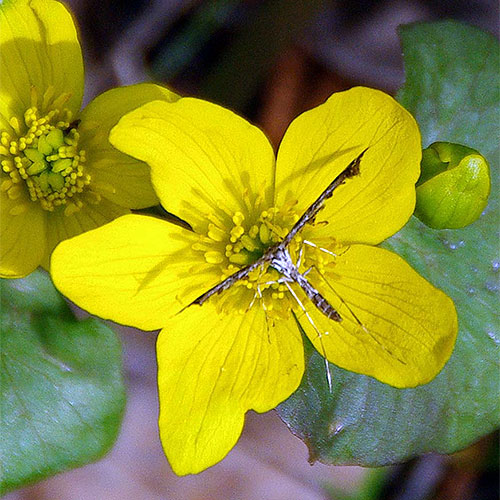 Kaufman and Eaton go on to say that the species are “essentially impossible to separate in the field.” In order to determine species, it is usually necessary to scrutinize closely what Monty Python referred to as their “naughty-bits.”

Plume moths are found all over the world, and their flight periods include most of the warm months. The adults are often found on flowers, feeding on nectar and pollen, right out in the open. Species that appear early (like the moth on the marsh marigold, photographed toward the end of April) have probably overwintered as adults (an unusual move in the insect world). The BugLady sees a pale whitish/tan species on flowers (especially Yarrow) and at night in summer by her front porch light.

Plume moths typically lay their eggs on underside of young leaves at a plant’s tip. Newly-hatched larvae are slow, hairy, spindle-shaped, leaf rollers, root-borers or leaf-miners that feed within their chosen shelter. Older caterpillars may bore into the plant’s stem, flowers or seed pods. They exit the interior of the plant to form a pupa that hangs head-down from the underside of a leaf. 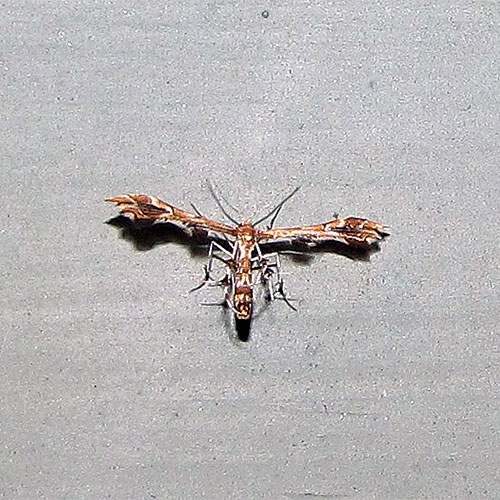 The larvae of many of these small moths are food specialists. Some use their powers for good and some do not. On the negative side are the larvae of the Grape Vine Plume, which web together the terminal leaves of grapevines and feed inside (but don’t cause significant harm) and the larvae of the Artichoke Plume, which start outside the choke but eat their way toward its heart (found nationwide, it eats thistles where it can’t find artichokes). Other Black Sheep include the Snapdragon and the Geranium Plumes (the BugLady will have to reassess the annual summer damage to the herd of geraniums on her front porch; she was blaming weevils).

Some helpful “T moths” have been imported as biological controls for plants running amok in their adopted countries. These include the Horehound Plume, introduced to Australia to control invasive horehound that is covering pastures and waste places there, and the Ragwort Plume, brought to New Zealand to eat imported Senecio in wetlands. There is a Plume for mistflower, lantana, and groundsel, and a Bindweed Plume has been introduced to the US to control that serious weed of agricultural and open places.

The BugLady’s favorite Plume Moth is a native of the U.S. Gulf Coast that eats the leaves of the Pink Sundew (instead of the other way around). The 8mm long (1/4”) larva first eats the sticky droplets from a section of leaf and then, having “disarmed” it, eats the leaf itself. It is known to rob the sundew of dead insects that the sundew has trapped, and it grazes on flower buds and rests on petals. What eats it? A tiny parasitic wasp finds it and appropriates it as food for its young.