The impressive Pigeon Horntail is often called a “primitive” member of the ant/wasp/bee order—Hymenoptera (membrane wings). Most Hymenopterans boast a cinched-in/Scarlet O’Hara waist. Not so the horntail; its cylindrical abdomen plugs directly into its cylindrical thorax. Its name doesn’t come from the long projection at the rear of its abdomen—this is a female and that’s an ovipositor (egg-depositor), and the males don’t have one. But, on the top (dorsal) side of the abdomen, at its tip, is a triangular “plate” or “horn,” best seen in the side view, which gives Horntails their name. This just-under-two-inch-long critter bounced off the BugLady when she was getting something out of her car, and fell on the seat. She treated it to a few hours in the refrigerator so she could photograph it. 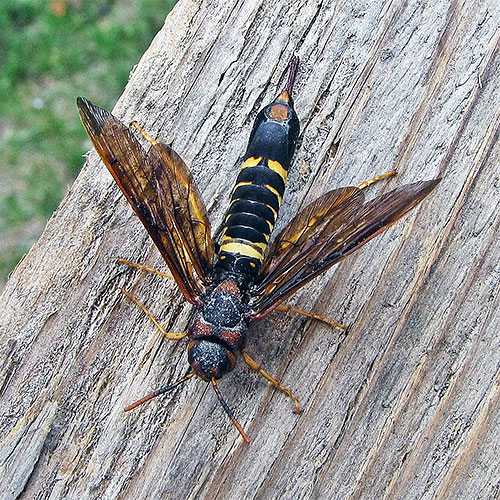 Horntails are often called “wood wasps,” probably because their eggs are laid in wood, and their young spend both their larval and pupal stages there. Horntails practice “complete metamorphosis,” going through an egg stage, a larval (eating) stage and a pupal (resting/changing) stage before emerging as a very different-looking adult. Adults have been found emerging into the interior of buildings that were built with the wood they occupied; they sometimes find themselves in a different country than the one where they began their life. 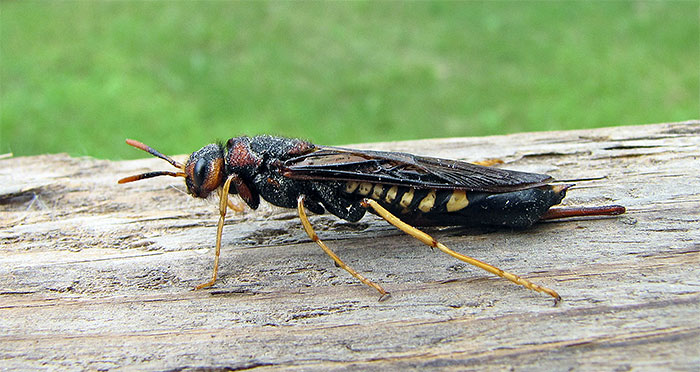 Ms. Pigeon Horntail (Tremex columba) drills into hardwoods, like maple and oak, with her ovipositor. Then she lays her eggs in the newly-made tunnel, and then she deposits on them some fungal spores, which she carries in a handy “pocket” in her abdomen. The fungus starts to grow, rotting the surrounding wood. When the eggs hatch, the “pre-treated” wood is softened so they can eat and tunnel more easily. Wowsers! She may expire as the final egg is laid (several references quoted each other on this point – but surely, if she has expired, then it was her final egg, regardless). It is, apparently, not uncommon to find dead females with their ovipositor still stuck in a tree.

Both the larvae and the adults have mouthparts designed for chewing, though the adults eat only nectar and water. Larvae feed on wood in the relative (but not complete) safety of the tree for up to two years. They are sometimes considered pests; the trees Mom picks are usually stressed somehow already, but neither the larval feeding nor the wood-softening fungus improves things. When they are ready to pupate, the larvae tunnel to within striking distance of the tree’s inner bark and construct a cocoon of silk and small bits of wood. The holes they ultimately emerge through are noticeable.

Adaptations seem to spawn more adaptations in response. The larvae of the Giant ichneumon wasp (Megarhyssa sp.) are parasites on horntail larvae. But how, since the horntails are, by most standards, inaccessible, do they get together? Ms. Ichneumon (ichneumon comes from the Greek word for tracker) is a large wasp with long filamentous ovipositors—about 3 inches long—that she curls up over her body. She apparently lays her antennae on the outside of a likely tree. From within, she picks up the vibrations of horntail larvae gnawing away in their wood chambers (alternatively, she uses her antennae to smell their frass—droppings—and the wood-softening fungus). Then she “precision-bores” into the chamber with her ovipositor and lays an egg on a horntail larva (alternatively, she threads her hair-like ovipositor through the cracks in the wood). The ichneumon larva acts as an external parasite of the horntail larva, which stays alive until the ichneumon is ready to pupate. The adult ichneumon, also equipped with chewing mouthparts, uses them to exit the tunnel. 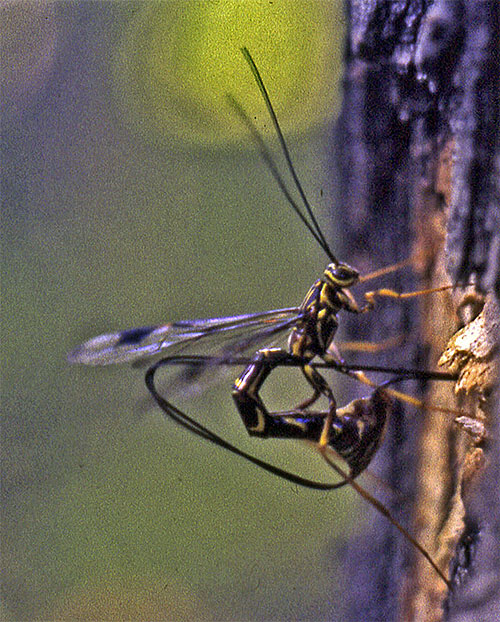 The male Megarhyssa is about the size of a damselfly; it flew into the BugLady’s car and stayed just long enough for a portrait. 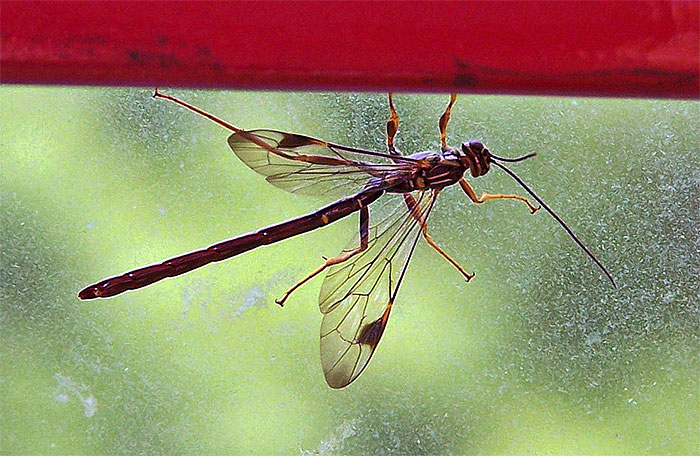 John Muir was right—when you pull on something, you do find that it is connected with everything else.