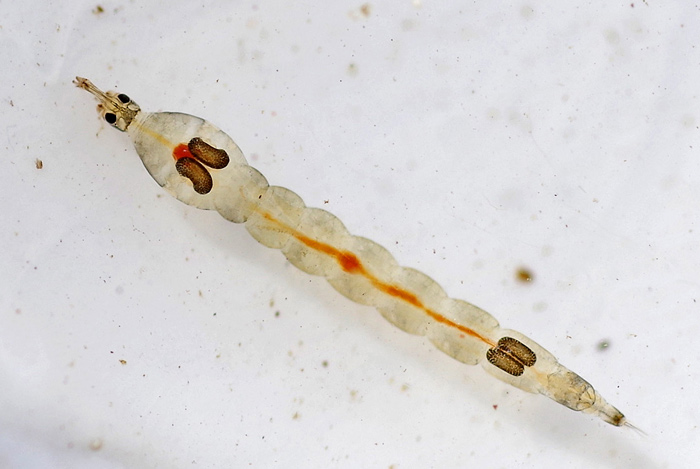 Here’s a rerun of an episode that first aired early in 2012, with a few new pictures and words.

Phantom midge larvae orient horizontally in the water, turning slowly, rising and sinking in the water column, reminding the BugLady of a young pickerel she once knew.

One of the great rewards of scooping in the ephemeral pond is finding phantom midge larvae. Phantom midges (family Chaoboridae) are flies in the order Diptera. They are not mosquitoes, but they’re often lumped with mosquitoes (family Culicidae) and midges (family Chironomidae) in field guides. All have aerial adults and aquatic young, and adult phantom midges do resemble mosquitoes superficially, but, where it really counts – in the mouthparts – vive la difference! An adult phantom midge has a very short proboscis, and conventional wisdom holds that it does not/cannot bite. Although, one source conceded a little nectar feeding for some species, and a 2010 publication suggests that the mouthparts of an unspecified genus are long enough for biting, a position strengthened by the incriminating presence of blood (of an unspecified genus) in some females’ guts. 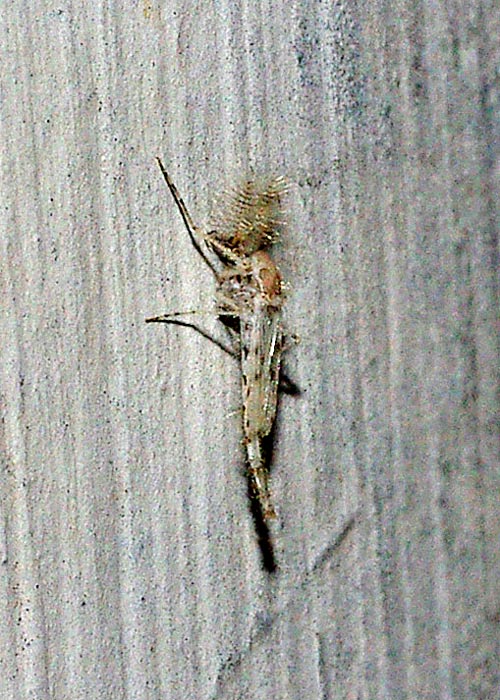 Adult PMs look translucent, but the name really comes from their transparent larva (sometimes called “glassworms”). An alternate explanation for “phantom” is that the markings on the larva’s back resemble a ghostly face; the BugLady doesn’t see it, but she could never discern those Magic Eye pictures in the ‘90’s either, no matter how hard she squints. The slim larva looks like it belongs in the genus Chaoborus, and the chunkier one may be Mochlonyx; the adult looks like Chaoborus punctipennis. The BugLady did a little dictionary work and Merriam Webster gave up the following: “Puncti” comes from the Latin for “point” or “marked with minute’ spots/dots/points.” “Penne” comes from “penna,” the Italian word for quill, which comes from the Latin word for feather (“pinna”) or “wing” (“penna”). “Wings with tiny spots?” For a glamour shot of the adult, click here. The male’s ultra-feathery antennae help him detect females, and his long abdomen ends with claspers.

Because PM larvae live in glass houses, we can see what’s going on inside, and the first thing we notice is a pair of pigmented blobs in front and another pair in the rear (kind of counter-productive, camouflage-wise, to carry dark baggage inside a crystalline container). These extensions of the tracheal tubes are not lungs but are hydrostatic organs (swim bladders) that allow a PM larva to maintain its position in the water column effortlessly. The larva breathes through its body surface, but its swim bladders may allow it to extend its stay in the low-oxygen conditions on a pond’s floor. The BugLady was unable to find an anatomical diagram of a PM larva that labeled anything other than the swim bladders, but it looks like there are some circulatory and nerve structures in there, too. 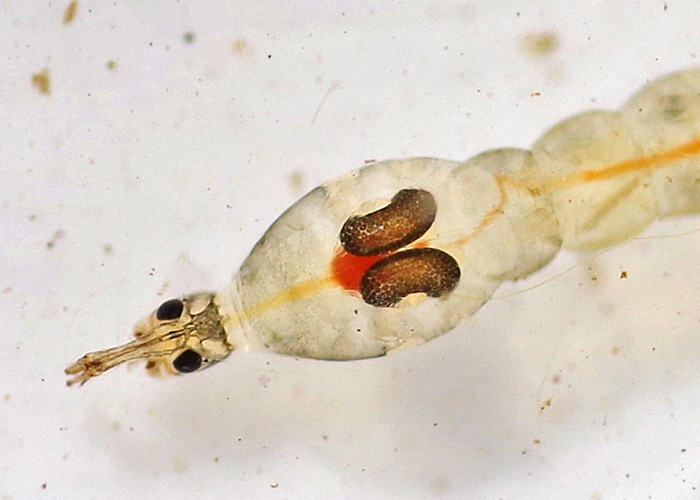 PM larvae have prehensile antennae that are modified to grasp their prey – daphnia, rotifers, small mosquito larvae, and other PM larvae – crush it, and deliver it to their mouth. They may also do a little filter feeding. Apparently, fish aren’t fooled by transparency, and PM larvae are a favored fish food (fly-tiers can find natural history info and instructions for tying a lure of a PM larva). They are consumed by other aquatic predators and by birds. To avoid being eaten, and to follow the movements of their equally planktonic food supply, the larvae of many species of PMs migrate daily from the sediments at a pool’s bottom to the open water near the surface as the sun sets, and back to the bottom when it rises. Migratory inclinations wax and wane depending on the age/stage of the PM larva, but development of the hide-during-the-day-and-feed-at-night behavior seems to depend on whether the species evolved in fishy waters.

Larval lifestyles seem to be fairly similar across the board. Eggs that are laid in gelatinous rafts at the water’s surface hatch in a week or so, and the larval stage lasts for six to eight weeks. Like mosquitoes, both the larvae and pupae are ambulatory, moving by wriggling (pupae are vertical migrators, too). See for a picture of a PM pupa. Here in the North Country, there’s a single generation per year, which overwinters as mature larvae. When it’s time to emerge as an adult, the floating pupa splits the back of its thorax and the adult climbs out directly into the air, by-passing the clingy surface film. Adult phantom midges live only a few days, sometimes spending those days in the company of thousands of their confreres in what are described as “smoke-like plumes.” 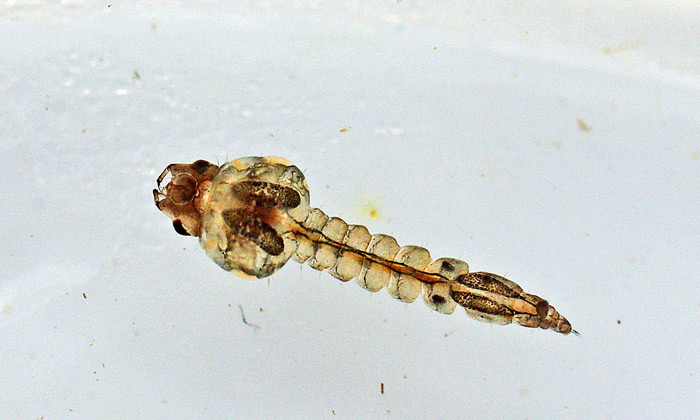 They’re everywhere. PM larvae are found, sometimes very abundantly, in still, open waters around the globe, where their ability to live in low-oxygen conditions allows them to be tolerant of water pollution. One study in a Dutch lake found 1,400 to 1,800 individuals per square meter, with an annual biomass of more than 10 pounds of a single species of PM alone. Not surprisingly, they’ve been known to clog water filtration systems. In another European study, PM larvae were thick enough in the water that their movements could be tracked with sonar. When a population of these tiny predators is that dense, it can shape the make-up of the rest of the community.