It’s just the beginning of November, and the BugLady is already missing butterflies, maybe because with a few notable exceptions, this was a pretty low-butterfly year (populations of moths, orb-weaving spiders, and some dragonflies also seem off). In a mild year, the Pearl Crescent (PC) sometimes pops up well into October, and there are even November records. This surely was a mild fall, but butterfly numbers have been vanishingly small. Two years ago, we had a cool, wet spring with a foot of rain in June, which can’t have been good for eggs, caterpillars, or cocoons. The spring of 2009 was also cool, and although the butterflies were on time, the flowers were late. This spring was early and ideal, but empty (not including great numbers of migrating Monarchs and Red Admirals). Except for the mid-summer blaze of sulphurs, the other species came in “one-sies,” and some notables are missing from the BugLady’s year list. It will be interesting to trace how butterfly populations reestablish themselves in coming years. 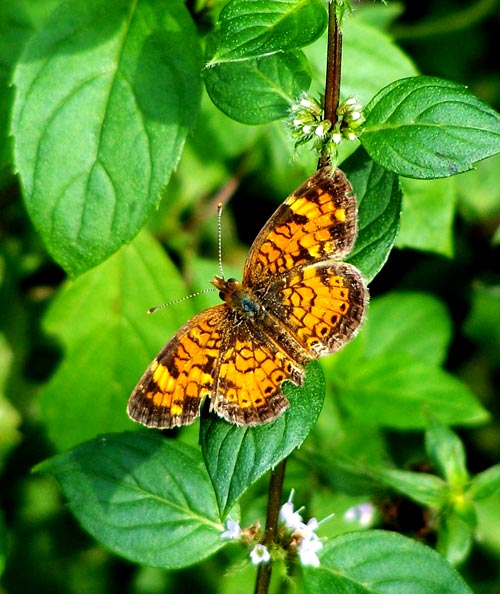 Pearl Crescents (Phyciodes tharos) are in the Brush-footed butterfly family (Nymphalidae). Most sources agree that PCs are one of the most abundant butterflies in the U.S. Some parts of the west coast are PC-free, and the Northern Crescent (NC), a species that was split off from the PC 25 years ago, takes over in southern Canada. Most sources also agree that because of a number of very similar species, PCs are also one of the most difficult butterflies to identify. There is a lot of variation in the size and darkness of various wing spots/patches regionally; PCs show sexual dimorphism (the dark markings on her wings are heavier than on his); and there are several generations per year (the “cool season” broods are darker than the summer broods). Bottom line—this is a small butterfly (wingspan maybe 1 ½”), orange with black/brown edging, patches and “lacey webbing,” with front wings rounded and sometimes slightly “scalloped-looking,” and with a crescent-shaped patch near the trailing edge of the underside of the hind wing. As Mike Reese says of PC/NC identifications on his excellent website Wisconsin Butterflies, “In Wisconsin, I think that there is a much broader overlap of these two species, and throughout central Wisconsin their identification brings many headaches. The females especially are extremely similar and I do not believe they can be distinguished in the field with any confidence, and it is best to check the males to determine whether the species is present.”

Adult PCs are generally found close to the ground, and they are fast fliers whose flight often shows a flap-glide pattern. They like grasslands, bike trails, vacant lots, edges, and open spots in woods, where they bask on low plants, siphon nectar from a variety of wildflowers with their long proboscis, or take in minerals and moisture from the edges of mud puddles. Males also patrol open spaces for females, and when they find a willing one, their courtship may include, according to Butterflies of the Great Lakes, “antenna bobbing and mutual wing vibration and wing rubbing. If mating is disturbed, the female carries the male, who keeps his wings closed while being carried” (in aerial pairs of Monarchs, it’s the male that’s doing the heavy lifting). 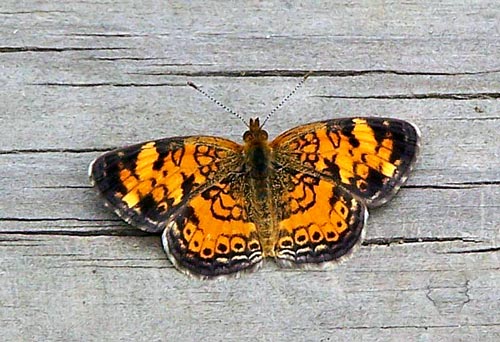 The PC males who troll the sunny spots for females are a feisty bunch, both curious and aggressive. They have been recorded chasing intruding male PCs, other species of butterflies, small birds, and even Frisbees. Some even check out the humans who cross their turf.

Seasonally, PCs will breed as long as suitable host plants can be found, so there are several broods per summer and they are present year-round in the far South. There are around 150 species of native asters in North America, and PC caterpillars eat most of them. Females lay their eggs in clusters, sometimes several eggs deep, on the underside of the larval food plant. Here the research gets a little murky. Early stage caterpillars are social/solitary, and they generate and feed under a silk web/don’t spin silk. It is agreed that late-stage caterpillars are anti-social. The confusion makes the BugLady wonder if the caterpillars are as tricky to identify as the adults. The early broods spend about a month morphing from egg to adult, and the final brood of the season overwinters in the caterpillar stage, emerging to feed again in spring. Palmer, in his Fieldbook of Natural History, says that they are “expert hiders on New England aster,” and Warner, who wrote the 500-plus page, beautifully illustrated Caterpillars of Eastern North America, states that “even though the PC is among the most common butterflies in Connecticut, I have never encountered its caterpillar.”