Someday, the BugLady will write a book about trying to pry information about this wasp from the ether (once she figured out that it isn’t a Sphex or a Podalonia); it will be subtitled (with apologies to Judith Viorst) “Google has a Terrible, Horrible, No Good, Very Bad Day” (and possibly sub-sub-titled “Net Neutrality and Entomological Research? Really??”). Anyway – different pulpit.

The BugLady found one common name for Palmodes dimidiatus – the Florida Hunting Wasp – though it was not universally embraced. FHWs are in the family Sphecidae, the thread-waisted wasps (loosely called digger wasps), a family that contains some large and handsome, metallically-colored wasps that are named for the elongated constriction (called the petiole) between the thorax and abdomen. We have visited them before in the form of the Great black wasp, the Golden digger wasp, Thread-waisted wasps, Cricket hunters, and Mud daubers. All lead, as do the vast majority of wasps and bees, solitary rather than communal lives. Because they have no hive full of sisters to defend, solitary wasps are – generally – less likely to inflict pain on observers. Despite the fact that they are conspicuous on flowers in high summer, they are an under-studied group.

It’s a small family, with about 125 members in North America. They mostly live out in the open and make nests in the ground for their eggs. Adults feed on nectar (they’ll sip from extrafloral nectaries, of previous BOTW fame ), and they sometimes partake of honeydew and of the bodily fluids of some of the invertebrates they capture for their young. They’re considered pollinators. 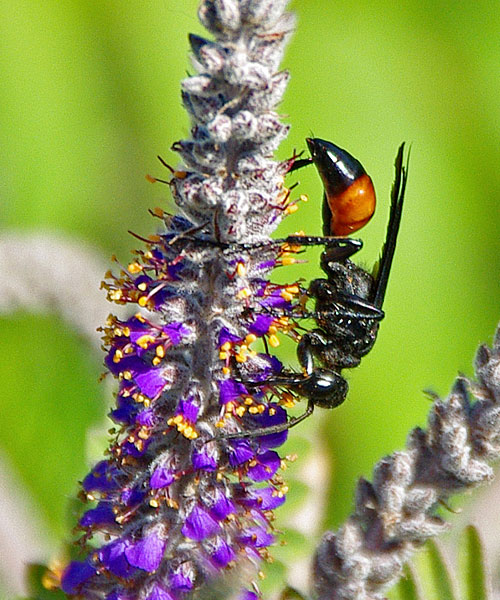 There are 10 species in the genus Palmodes (either, says bugguide.net, from the Latin for “palm tree” or “hand,” or from the Greek for “vibrating” or “throbbing”). The FHW is found across the continent, but it’s the only member of its genus in the eastern half of North America. Palmodes specialize in the katydids (Tettigoniidae), and some western species prey on Mormon crickets (which are actually katydids and may be 2 ½ inches long). The FHW prefers immature Shield-backed katydids (Atlanticus).

Female FHWs dig a tunnel in loose or sandy soil and make a widened chamber at the end. She digs by biting at clumps of dirt, and scraping the loosened chunks away using the “combs” on her front legs. She forms loose soil into a ball that she tucks “under her chin,” holding it against her mouthparts with her front pair of legs and walking on the other four legs back up to the surface. She saves the soil in a small pile. When she is finished excavating, she plugs the tunnel temporarily and flies off to find a katydid.

She’s about an inch long, but she routinely tackles prey that is much larger than she is (studies suggest that she will go after the biggest prey she can handle), grabbing it, paralyzing it by stinging it once at the base of each set of legs and finally in the throat, then straddling it and dragging it back to the nest.Click here to see the image. Unlike some other solitary wasps, she makes only one chamber per tunnel, and she provisions it with only one katydid. That task complete, she lays a single egg on the still-living katydid, fills the tunnel with the reserved dirt, and disguises its entrance. When her larva hatches, voila – dinner is served. It will eat, grow, and pupate underground, eventually emerging as an adult.

In his book called Reproductive Behavior and Evolution of Tettigoniidae, Darryl Gwynne parses the difference between predators and parasites, “Digger wasps are often referred to not as predators but as parasitoids, “parasites” whose feeding activities eventually kill but do not dispatch the ‘prey’ right away so that it is kept fresh and unspoiled. The line between predator and parasite is blurred because the actual capture of the host insect by the adult wasp is certainly akin to predation, whereas the larva’s slow consumption of its motionless but still living cellmate has all the hallmarks of a parasitic act.”

Words. The BugLady appreciates the nice turn of a phrase; here are two gems she gleaned while researching this wasp.

From Gwynne’s book, in a discussion of Great Golden digger wasps, he quotes Howard Ensign Evans (1962), who said that that “he knows of few things more exciting than sitting by a flourishing colony…..and watching the females soar in, each with a katydid clutched beneath her: crisp, green songsters, creatures of the sunshine and warm, moonlit evenings, doomed to be devoured by flabby grubs in dark chambers.”

And, the dedication of a doctoral dissertation on wasp phylogeny and behavior, “To Burton and Joseph Payne, who walked high steel so the author wouldn’t have to.”