By now it’s no secret that the BugLady is enthralled by wee critters that swim about in the water, especially the water of ephemeral ponds. Who needs charismatic megafauna! (Reminder—the BOTW definition of “bug” borrows more from that of a first grader than that of an entomologist).

Once upon a time, there were ostracods. How do we know that? Because these tiny, aquatic critters, critters that you would never expect to contribute significantly to the fossil record, in fact managed to produce the most numerous fossils of all arthropods. Of all arthropods—that’s insects, spiders, centipedes, millipedes, and crustaceans. Since the Ordovician period, 485 to 443 million years ago, they’ve even been found in amber (fossilized tree sap), where they may have landed during a flood. So pervasive are they that a system has been developed for evaluating ancient climates (paleotemperatures) called the mutual ostracod temperature range (MOTR), based on a measurement of the building blocks in the ostracod’s “shell.” And, since the shapes of ostracod “shells” are indicators of their ecological milieu and of their feeding habits, they are used as paleoenvironmental indicators. And, fossilized ostracods are used to date marine sediments. 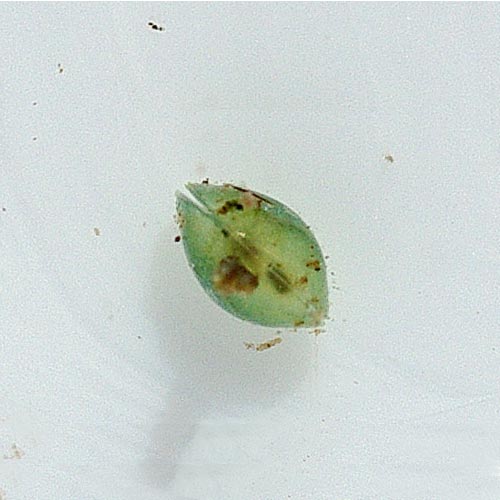 In the etymology department, Wikipedia tells us that the Greek root ostracon means shell or tile, and that “the word ‘ostracize’ comes from the same root, due to the practice of voting with shells or potsherds.”

Ostracods’ most recent family tree seems to read: phylum Arthropoda (jointed appendages) (yes—they have appendages), subphylum (formerly class) Crustacea, and class (formerly subclass) Ostracoda. The Monterey Bay Aquarium website explains that because they look like a shrimp inside a seed pod, they are commonly called seed shrimp (and an older European nickname is mussel shrimp), but the BugLady thinks they look like pistachios. Fellow Crustaceans include the familiar pill bugs, crabs, crayfish, shrimp, and lobsters, as well as barnacles, fairy shrimp, and minute aquatic forms like daphnia, and copepods.

In Search of the Ostracod

Ostracods are found worldwide, and there are lots of ostracod species, both marine and non-marine, with many more waiting to be discovered. The BugLady found estimates of 8,000 to 13,000 total living species, 2,000 of which are non-marine (non-salt water), with 420 of those non-marine species being found in North America. As many as 50,000 additional species have been identified from fossils. About half of the non-marine species are in the family Cyprididae, and the BugLady suspects that the ostracods she photographed in the ephemeral pond belong in that family because the family is noted for their ability to swim, and for tolerating stagnant, oxygen-poor waters and having drought-resistant eggs, larvae and adults—important adaptations for an ephemeral pond dweller.

If you can think of an aquatic habitat—running water, still, permanent, ephemeral, underground, surface, salt, fresh, hot sulfur, brackish, shallow, or ocean abyss—there are ostracods living in it. They also occupy mud and sand, algal mats, clumps of wet moss, and damp tropical soils. One species hangs onto the underside of the surface film in open water. Freshwater species probably evolved from ostracods living in brackish waters that flooded frequently, so that they gradually adjusted to lower saline levels. One source speculated that the biggest jump in new species of ostracods may come when groundwater is analyzed for their presence.

Many species are generalists, not limited to a single habitat, and while most freshwater species are “benthic” (creeping about on the substrate/debris at the bottom of the body of water), some are active swimmers and others are found on aquatic plants (but very few are planktonic). In general, ostracods prefer the shallow water at the wetland’s edge, up to a depth of about three feet, and they are more active in light than in shadows. They can tolerate a wide range of water chemistry and temperature, but they aren’t found in highly polluted waters.

Ann Haven Morgan, in her Field Book of Ponds and Streams, calls ostracods “another army of minute crustaceans averaging only a millimeter in length, and impossible to tell apart with a simple lens.” What they have in common is two limy/calcified “shells” called valves that are hinged at the back and held together with muscles like a scallop’s. This makes them look like teeny clams—teeny, hairy clams, because the outside of the valves may be covered with hair-like setae. The body inside the “shell,” is somewhat flattened and is not segmented. The head end has two pairs of antenna-like appendages plus two pairs of mouthparts (mandibles and maxillae). Depending on the species, those all-purpose antennae, especially the second pair, may be used for digging, climbing, locomotion, and feeding, and males use them to clasp females. The thorax area has three pairs of legs that are variously used for locomotion, respiration and grooming. The rear end has two long “tails” called caudal or furcal rami that can also be used for locomotion. The appendages can be tucked inside the valves and the valves pulled shut if the creature is alarmed. See Ostracods on the British Geological Survey website.

Ostracods come in a variety of colors from dark gray to yellow to red to blotched, and species living on green plants are often gray, green or brown. Most freshwater forms measure between 1mm and 3mm, but a South American freshwater species is about a half-inch long, and some marine species are giants at almost 1 ¼” (“as big as a meatball,” says one source).

Scientists tell us that when they collect ostracods, most of the individuals they find are female. The number of males in a population depends on an ostracod’s species, and the type of reproduction is determined by the number of males in the population. Reproduction by parthenogenesis (virgin birth) is common, especially in freshwater ostracods (in some species, males have never been found), but in species with more males, sexual reproduction is de rigueur. Eggs are laid on rocks and vegetation or simply loosed into the water; they hatch into active Nauplius larvae that have appendages on their head for swimming and that shed eight times on their way to adulthood. Eggs that are left in the mud when an ephemeral pond dries up will hatch when water returns, no matter how long it takes.

A diverse crowd like the ostracods shows up on many rungs of the trophic ladder. There are carnivores/predators, herbivores, detritivores, and scavengers but ostracods are generally characterized as omnivorous scavengers. They eat tiny organisms like algae, diatoms, bacteria, molds, and pieces of organic detritus that are present in the water or on vegetation. In some, food is delivered to the mouthparts by a current set up by the appendages. The BugLady found a picture of an ostracod straddling an aquatic leaf, rasping off food on both sides as it moved along the edge of the leaf. Ostracods are eaten by hydra and other benthic organisms and by small fish, larval salamanders, and waterfowl; one species has been shown to be able to survive a trip through a bluegill’s digestive tract.

Whether swimming or creeping, ostracods locomote by extending their appendages from between the valves, with the valves “ajar”. See YouTube video of live Ostracods. Their main sense is touch, they move their antennae constantly and also have sensory hairs on their bodies. The Nauplius larva has a simple eye, as do the adults of some species.

The Ward Science Supply company will sell you some ostracods, but they urge consumer responsibility: “Never purchase living specimens without having a disposition strategy in place,” they say, later adding that “In order to protect our environment, do not release any of these organisms into the wild. When you are done with the crustaceans, add bleach to the culture and dump it down the drain.” Good on you, Ward Science Supply.

Oh yes—several species of marine ostracods are bioluminescent (using luciferin and luciferase, the same two chemicals that lightning beetles use), and they glow blue at night in the water and on the sand. The light is in a secretion that the ostracod releases when it is disturbed. The Japanese call them sea fireflies (umi-hotaru), and the BugLady came across an anecdote about Japanese sailors during WWII reading their instruments and charts by the light of bowls of luminescent ostracods.