The BugLady has not developed her “grasshopper eye,” so when she photographed this small, odd hopper sitting at the tip of a milkweed leaf, she sent it off to an expert (thanks, Kathy). NOT a grasshopper, she was told, but something she had never heard of—a grouse locust in the Pygmy locust/Pygmy grasshopper family Tetrigidae (for a discussion of locust vs. grasshopper, see the recent BOTW about Green-legged Grasshoppers). There are about 30 species of GLs in North America; Obscure grouse locusts/grasshoppers (Tetrix arenosa, probably) live in North America from the Great Plains to the Atlantic.

The Obscure grouse locust, a.k.a. the Sand pygmy grasshopper, may borrow its genus name Tetrix from the scientific name of the Black Grouse (Tetrao tetrix). One source suggested that both the bird and the grasshopper share the grouse-like habit of bursting from cover and flying away (with apologies to the grouse, OGLs can fly vigorously but they prefer to hop). Alternatively, Tetrix may refer to the Latin word for rugged or severe because of the OGL’s chiseled-looking appearance. 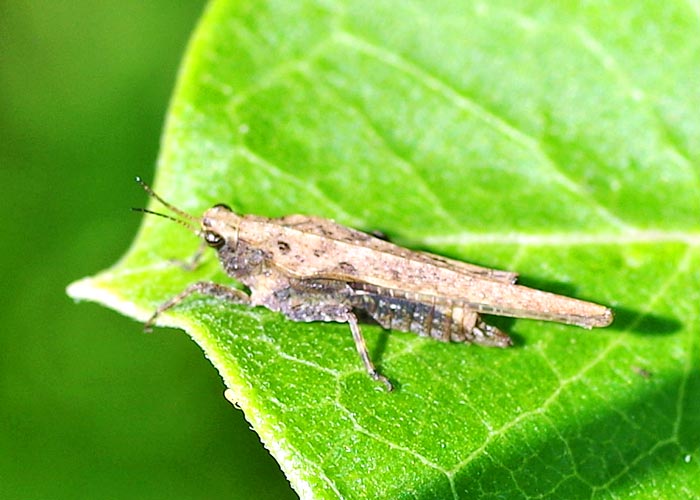 How can you tell it’s a grouse locust? The thorax is the middle section of an insect, the one that the wings (if any) and legs attach to. In insect anatomy, the first segment of the thorax is called the prothorax, and the top surface of the prothorax is called the pronotum. Only in the grouse locusts does the pronotum extend past the thorax and all the way to the end of the abdomen, sometimes even to the wingtips. The North American grouse locusts are a drab bunch that blend in with debris on the ground (though a growth of algae on their exoskeleton can turn them green). Females are generally larger than males and may be a different color. Tetrigids are most common in the tropics, where some species spend their lives in trees, and there they can be fairly ornate, with pronota that make them look like twigs or leaves. A GL’s first set of wings is small or absent (and there are wingless species), and they’re typically a half-inch long or less. They neither make nor hear noise.

Many species of GLs are found on mudflats and at the edges of wetlands. OGLs, adults and nymphs alike, nibble on diatoms and algae that they find at the water’s edge (aquatic vegetation makes up the majority of the food eaten by some riparian GL species), on algae that they find growing on dirt, on some molds, and on lichens, mosses, and newly-sprouted grasses.

Some streamside/pond side species of GLs, including the OGL, routinely escape from predators by leaping into the water, and their flattened back legs (or front legs, depending on the species) help them to swim. One group of GLs can swim underwater and are said to lay their eggs there!

Adults can be seen in spring and fall; OGLs oviposit in mud (presumably) in late spring, and their nymphs feed close to home in their early stages, reaching adulthood by mid-summer. There is one brood a year up here in God’s country (two Down South) and they overwinter as adults (unusual in Orthopterans), ready to start eating the next spring, and maybe even the spring after that.

A flight of a related grouse locust over northeast Illinois and northwest Indiana in 1893 was chronicled in an article by Joseph L. Hancock in The American Naturalist. Called “Unusual Flights of the Grouse Locust (Tettigidea lateralis Say,) in North Eastern Illinois.”

On the nineteenth of September, 1893, the Grouse Locust, with a few other members of Acrididae [apparently they were once classified with the short-horned grasshoppers], striking out for more favorable conditions, landed at night in swarms in Chicago. The writer noticed them everywhere in the city. The small size of this locust…with peculiar inconspicuous colors, caused them to be overlooked by the people passing the next day who, without being conscious of the fact, crushed thousands under their feet, leaving tiny stains on the sidewalk.

A lot of work was done on the genetics of the group and on parthenogenesis in GLs in the early 1900’s. Apparently, female GLs may involve males in reproduction, or not. Several species are listed as being consumers of agricultural crops, including tobacco, in publications from the 19th and early 20th centuries. One of these (A Report on insects of Massachusetts, injurious to vegetation, 1841) includes an account of capturing grouse locusts in France by dragging a large piece of cloth through a field like a mainsail, the bottom edge traveling along the ground and upper edge held up to collect the fleeing bugs. A reward was paid for both eggs and locusts. In the U.S., GLs were boiled and fed to hogs, and farmers were advised to mow salt marshes, where GLs were common, in early summer to deprive the nymphs of food. 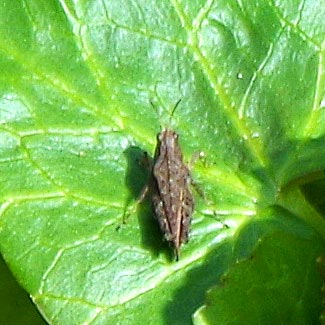 The BugLady found a wonderful note on phoretic snails in a blog called “Things Biological” (as alert BugFans will recall, phoresy refers to hitch-hiking). The photographer observed a number of knobby-looking GLs near a stream and photographed a few (halfheartedly, because he really wanted to photograph “normal,” non-lumpy grasshoppers). Only when he was editing his pictures later could he see that the “lumps” were small snails attached to the grouse locusts (head smack). Do GLs and other insects help snail species disperse? Stay tuned.

And of course, once the grouse locust was identified for her, the BugLady realized that she had (equally half-heartedly) photographed another GL, the (possibly) awl-shaped pygmy grasshopper Tetrix subulata.

Four Bluets and a Dancer – and a Forktail (Family Coenagrionidae)