The BugLady loves weevils, especially their little Jimmy Durante snouts, with antennae placed partway between top and tip. Weevils (family Curculionidae) are the largest family in the beetle order Coleoptera, and every fifth living thing is a beetle. Despite its name, the star of this episode is actually in the family Brentidae, the primitive or “straight-snouted” weevils. Their beaks are straight (the beaks of true weevils curve downwards); the snouts of females are longer than the males’ are, but the male has heavier mandibles. Contrary to the usual insect arrangement, male brentids are larger than females.

This guy, an Oak Timberworm Weevil (Arrhenodes minutus), appeared in the BugLady’s family room one afternoon. The presence of critters that eat wood is always a bit problematic in a home that thrives on neglect. This individual’s short, broad mandibles mark it as a male. In a largely tropical family, the range of OTWs includes most of eastern North America. 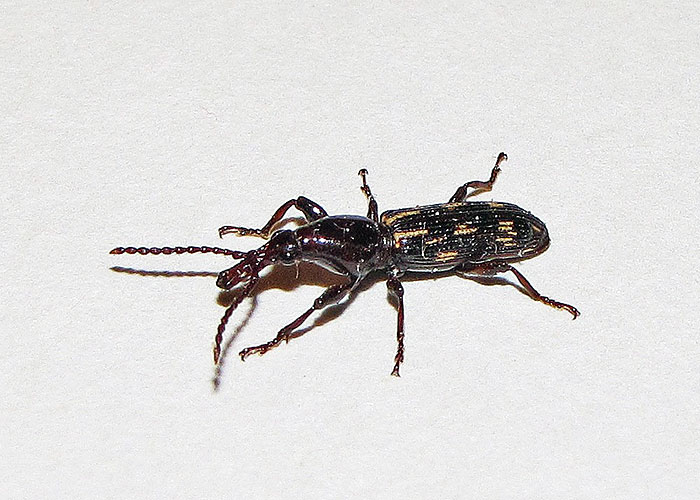 Both the adult and the larval Oak Timberworm Weevil (OTW) are associated with wood; in fact, their life cycle seems to be carried out mostly within trees. According to The Audubon Society Field Guide to North American Insects and Spiders by Lorus and Marjory Milne, the adults live under the bark of dead/dying/damaged beech, poplar, maple and oak trees where they feed on fungi, wood-eating insects, and liquid/sap exuded by the wood. Adults are attracted to wounds in bark where sap is oozing. They feed on the sap and also take advantage of the pre-fab opening to lay eggs. The female uses the small mandibles at the tip of her snout to bore/chew/tunnel further into dead or dying wood, preferably on the shady side of the tree, and she will bore through intact bark if an opening is not available. After she oviposits in a hair-sized hole (one egg per hole), she plugs it with a sticky secretion and frass (bug poop). 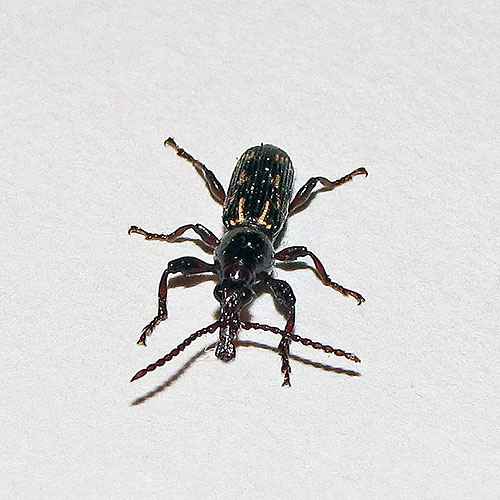 Brentids are long, narrow beetles that max out at about a half-inch, have enlarged femora (the top part of the leg), a pear-shaped thorax, and straight-ish (not elbowed), bead-like antennae.

After each oviposition (an actual word), the female brushes off her beak with her antennae (grooming is uncommon in beetles). If she is disturbed while excavating, she can remember, for a while, the locations of abandoned holes. The territorial male stands by during this process, using his broad mandibles to guard her from rival males (battles of 10 minutes duration have been recorded, with the victor resuming/assuming the job of guarding the female). According to OTW lore, if the female’s snout gets stuck in the bark while she is drilling an egg hole, the helpful male will help her to extricate it. The BugLady loves stories like this. An observer named Riley reported this in 1874. The scientist (Sanborne) who passed the story on in his 1983 monograph had not actually seen this behavior himself but called it “a rare case of tool-use by insects.” The male (allegedly) stands at right angles to her body (their two bodies forming an “L”) and presses down on the tip of her abdomen. Her legs become the fulcrum and her body is the lever, and…(Life is physics)…POP!

The larvae hatch in several days to several weeks, depending on the weather. They bore in and make horizontal galleries, mostly in dead, but sometimes in living trees, in order to eat fungi and wood. They may tunnel straight through, almost to the other side of the tree, before making a U-turn and heading back, more-or-less in the same plane. They keep their tunnels clean by pushing out the frass, and tunnels can be located by looking for these powdery deposits. Larvae pupate near the entrance of their tunnel. OTWs may live for 3 years, and some species spend two of those as larvae, so in the winter, adult, larval and pupal stages can all be found under loose bark. 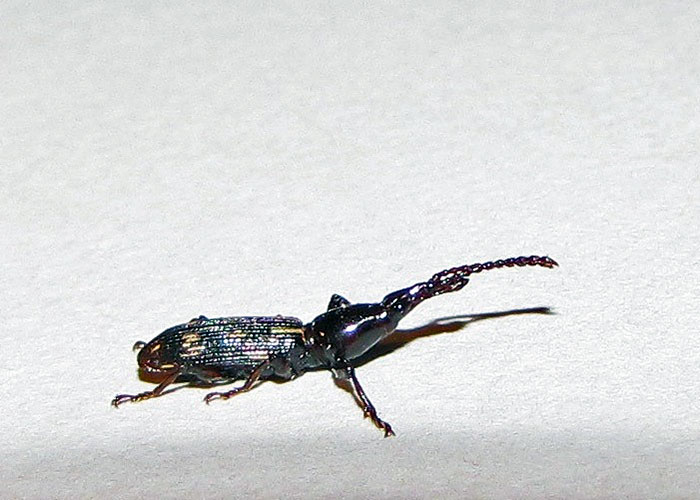