Occasionally, the BugLady just needs to share the confusion. Such is the case with the beautiful and dramatic mosaic darners, a group of large dragonflies in the genus Aeshna (family Aeshnidae) (German scholars, if you think there should be a “c” in that word, there once was). According to Wikipedia, the genus Aeshna may be a 17th century typo; it’s possible that the Danish entomologist (Fabricus) who named them was going for Aechma, Greek for spear. The name “darner” undoubtedly reflects the old belief that dragonflies could sew people’s lips shut—they were the Devil’s darning needles.

Mosaic darners are a group that includes about 20 darners in North America—darners whose abdomens are decorated with “a mosaic” of blue/green/gray lines and speckles. The size, shape and color of the stripes on the thorax are important field marks. They’re big—often exceeding 2 ¾” in length with wingspreads of 4 ½”. Sexual dimorphism runs rampant, with females of some species having as many as three different color phases (blue, green and yellow)—all of them distinct from the coloring of the males. 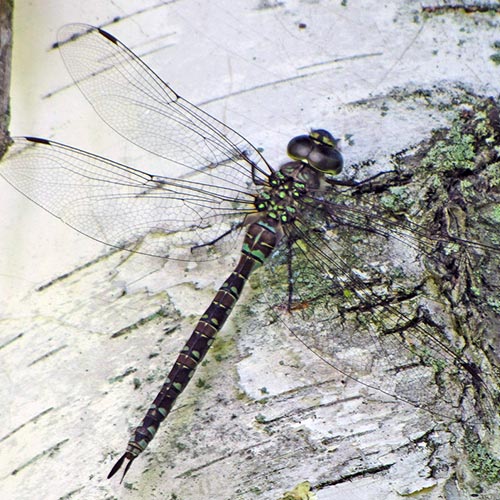 The BugLady may have mentioned in these pages her annual (and unfulfilled) resolution to get a decent photograph of the wily Common Green Darner dragonfly (genus Anax). The big darners, Anax and Aeshna and their brethern, perch vertically, making them hard to spot. On the rare occasions when they do perch, the BugLady doesn’t see them until she flushes them, and once in flight they stay in flight. The up-side is that although she can’t photograph green darners, she can identify them. The mosaic darners are a bit less camera shy, but they’re a real bear to identify. There’s even a species called the variable darner, which is. All of these pictures were taken in July, August and September; some mosaic darners linger well into fall— one graced the Riveredge Sturgeon Release in Thiensville on October 1, along with an American rubyspot damselfly. The BugLady, who is a pretty fair “picture-keyer” feels confident of only a few of her IDs and is going bug-eyed trying to figure out the rest (one really needs to scrutinize their “naughty-bits”). Feel free to jump in.

Their life story is similar to that of other dragonflies. Eggs are generally laid in the stems of water plants, above or below the water line in quiet, often boggy, plant-filled waters (males may defend small territories but most mosaics do not accompany their ladies) and the young (naiads) spend their childhood underwater, eating any critter they can nab—mostly other aquatic insects but sometimes tadpoles and tiny fish. They overwinter as naiads, emerging in late spring or early summer. When it is time to emerge, they hike up a plant stem or out onto land, (generally at night), rest for a while, and then split the skin on their back and pull themselves out. This nocturnal transformation allows them to complete the all-important task of pumping fluid into and “solidifying” their wings without the dehydrating effects of the sun.

Those compound eyes have as many as 50,000 facets apiece; each facet is a small, wedge-shaped individual eye with its own lens, light sensor, and optical nerve. These are powerful insects that hunt in the air, spotting their prey with their compound eyes and using their spiny legs to snag soft-bodied flying insects.

The Canada Darner (Aeshna canadensis) measures just over 2 ¾” in length. The top stripe on the thorax has a hefty, angular notch cut out of it, and there is often a small spot between the two thoracic stripes. One source refers to them as “wasp-waisted,” but the same is also said of the lance-tipped darner (our next species). They are the most common dragonfly in Wisconsin and over much of their range – northern U.S. and southern Canada, east of the Rockies.

CDs may form feeding swarms, and they may be seen feeding into dusk. They sometimes hover.

Lance-tipped Darners (Aeshna constricta) are similar in color to CDs but their thoracic stripe has barely a dip in it. Where the CD likes mucky lakes, the LTD can be found in ponds, marshes and slow-moving streams, where females insert eggs in cattail stems above the water. They’re named for the appendages at the tip of the female’s abdomen. Their range is similar to that of the CD, and they are widespread but not common in Wisconsin. 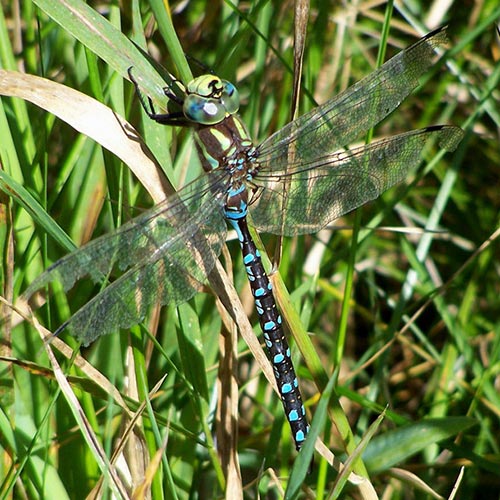 According to Mead in Dragonflies of the North Woods, LTDs are more likely to perch on the grass than on tree trunks. Like the CD, they sometimes hunt in swarms and although they like the sunshine, they may often be seen at dusk (remember, if you see a dragonfly swarm, take yourself to Dragonfly Woman’s Blog and report it.

The BugLady spent about 30 minutes trying to photograph the large, out-of-focus, flying mosaic dragonfly whose portrait is included here. Compared to the Canada darner she saw later that day, it was HUGE. Lake darners are not recorded for her county, but…

Interesting darner fact: darners tend to be darker in color when they are cold.

The BugLady recommends the Color Guide to Dragonflies of Wisconsin by Karl and Dorothy Legler and Dragonflies of the North Woods by Kurt Mead for your thorny dragonfly ID problems.