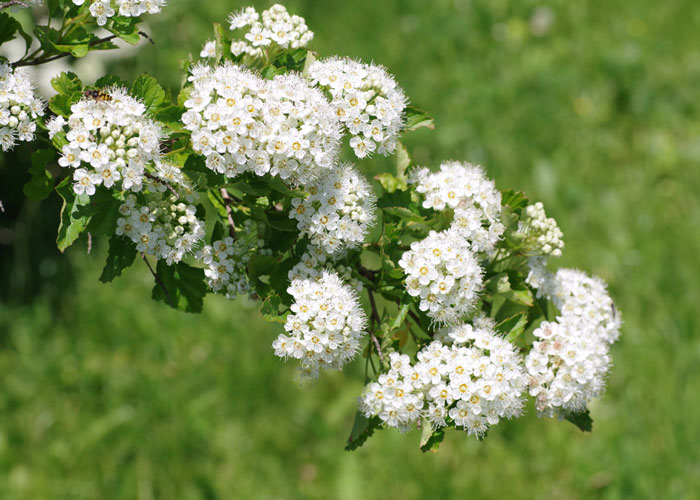 A few years ago, when the BugLady wrote about the ninebark leaf beetle (Calligrapha spiraea), she made a mental note to pay more attention to ninebark (Physocarpus opulifolius) during its blooming period. Ninebark? The way the BugLady heard the story, the shrub’s name comes from the German word “nein” for “no,” a reference to the fact that the smooth bark of the young branches looks like no bark at all (some non-German botanist eventually rearranged the vowels so that they made sense to him). Anyway, a ninebark in bloom is a heap of beautiful flowers – opulifolius, indeed – and this year she watched some ninebarks that were humming with insects. More than twenty species, in fact, most of them nectar-feeders!

Yes, it is reminiscent of that old-time favorite Bridal wreath, which is also in the rose family. 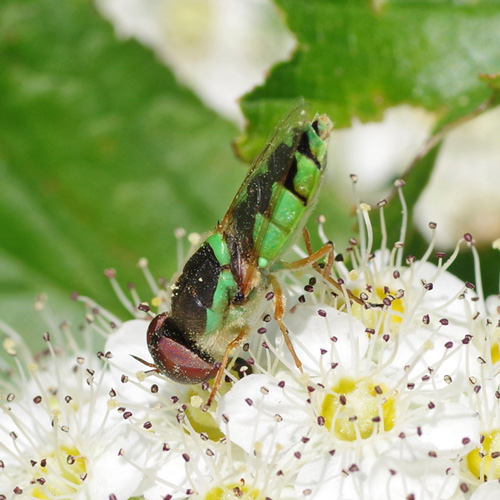 There were two species of SOLDIER FLIES, including the spectacular, green Odontomyia cincta. Soldier flies are an interesting bunch of often-sluggish flies (family Stratiomyidae) who fold their wings over their backs like a closed scissors and whose antennae are “Y”-shaped. The larvae develop in damp-to-wet habitats; spindle-shaped aquatic larvae often float at the surface, breathing through tubes in their posterior. Click here to read about this in a previous post..

At least three species of SWEAT BEES were there. They also come in brown, and in green with a stripy abdomen. These small, solitary bees are important pollinators of both native plants and (imported) agricultural crops like alfalfa. The green one is in the genus Augochlora – or maybe Augochlorella or Augochloropsis; the one with the red abdomen is in the genus Sphecodes. And yes, they are attracted to sweat, landing on your skin to lap sweat up with their short tongues, sometimes stinging as they are brushed off. Happily, the Schmidt Sting Pain Index ranks them as the least painful of all stinging insects. 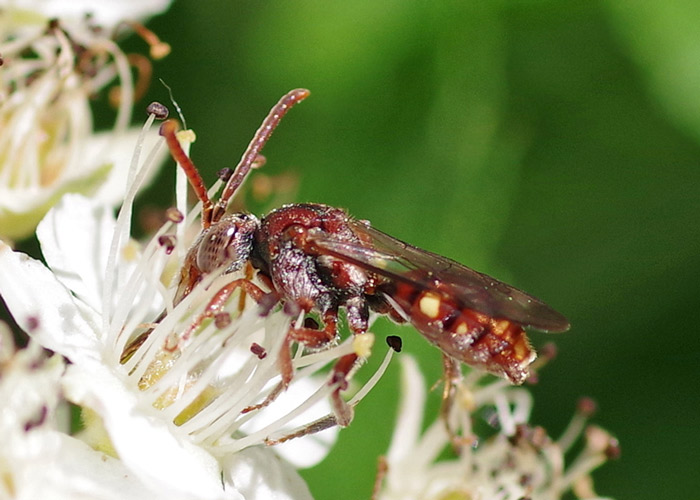 Sweat bees beware – the beautiful, little NOMADA bee has you in her sights! Female sweat bees make nest tunnels and provision chambers within them for their eggs. Nomada bees find those caches, lay an egg within, and her larvae eat the food that was stashed by the hard-working mining or sweat bee. It’s called kleptoparasitism/cleptoparasitism. For more about Nomada, click here for a previous post. 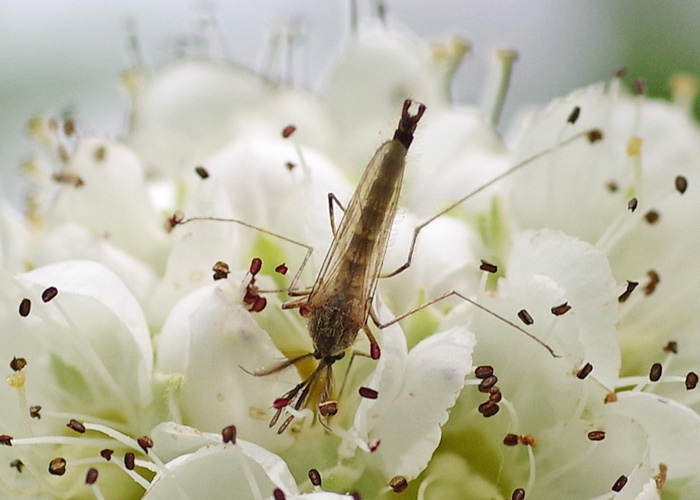 Male MOSQUITOES are vegetarians, sucking nectar from flowers and imbibing plant sap and aphid honeydew. Females are, too, except when those species that do need a protein boost in order to lay their eggs must find some blood. Not all species do, and some only look for a blood meal when they want to lay a second brood. We love to hate them, but they are (grudgingly) highly sophisticated organisms that are excellent at what they do. 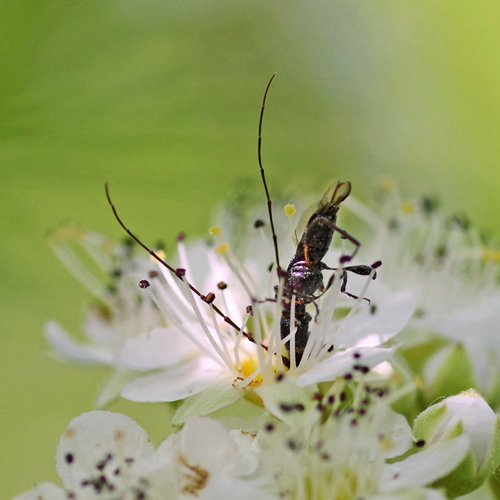 The BugLady always gets a kick out of finding the odd-looking, knobby-kneed MOLORCHUS beetles (Molorchus bimaculatus, probably), members of the Long-horned beetle family Cerambycidae. She finds them on white flower heads in spring, disappearing into the flowers head first as they feed. 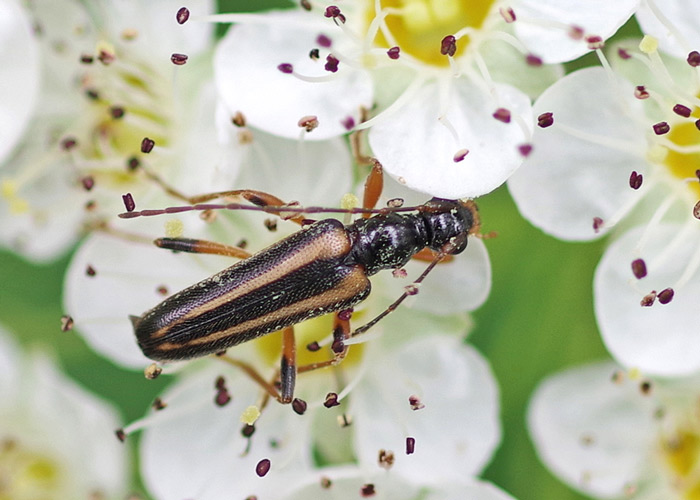 The other Cerambycid she saw was PIDONIA RUFICOLIS (probably), a widespread eastern beetle about which nobody says much of anything. 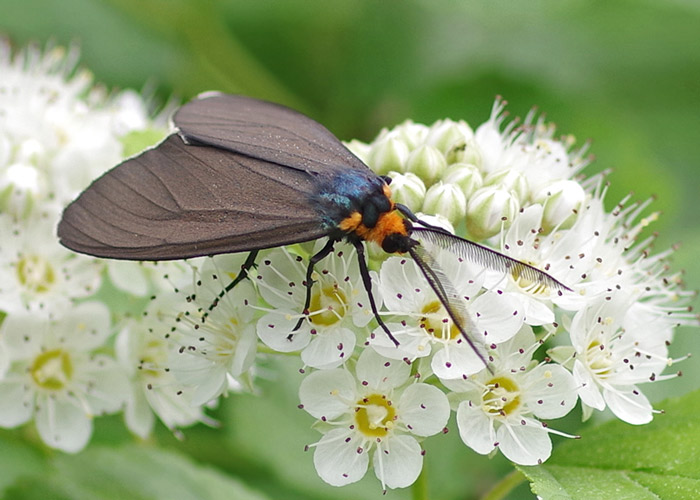 The extravagant VIRGINIA CTENUCHA MOTH is a largish (wingspread 2”), day (and night)-flying moth that’s frequently mistaken for a butterfly. Some references place them in a group called the “wasp moths,” which includes species that are more obviously wasp-mimics than the Ctenucha is. Adults are nectar-sippers; caterpillars grow up on a variety of grasses, sedges, and irises. The “C” is silent. 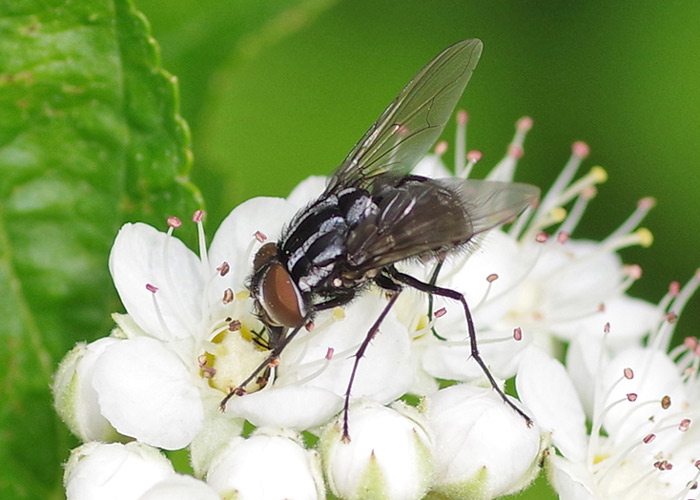 FLESH FLY – what an evocative name. It was (mostly) earned by the larvae, which are scavengers on decaying organic matter, dung (and open wounds), but the tweedy adults aren’t blameless. Along with nectar, they sponge up fluids that result from the decay of dead plants, animals, and dung. Click here to read about flesh fly in a previous post. 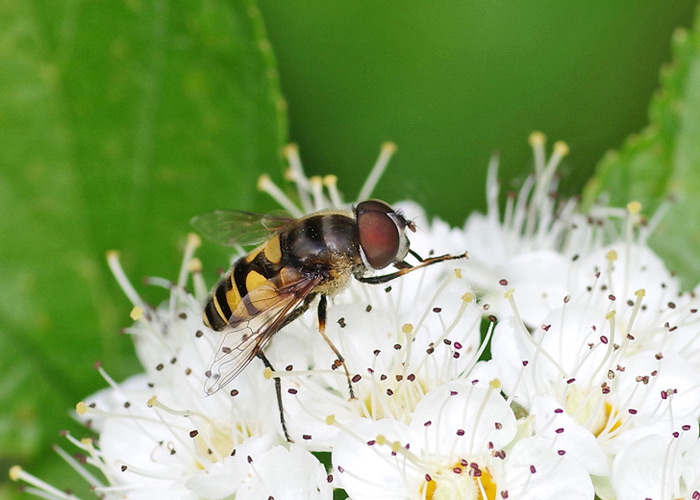 There are about 6,000 species of SYRPHID FLIES in the world (813 in North America). These bee mimics land lightly on flowers (they’re also called Hover Flies and Flower Flies) to glean pollen and nectar. There were several species on the ninebark. 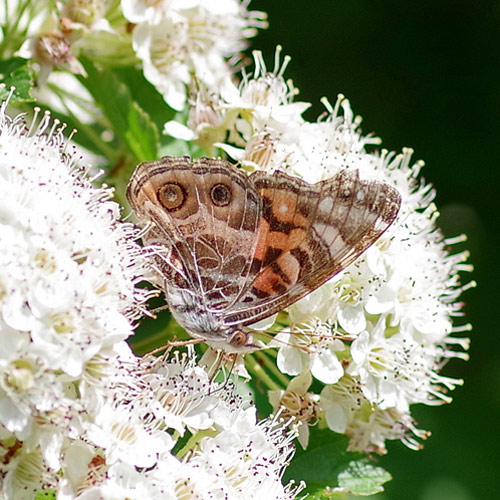