In a recent BOTW, the BugLady concluded with a bonus picture of a bunch of Northern Pearly-eye butterflies sitting on a cut orange. Pearly-eyes, which forage until sunset, are one of several other species of butterfly that has posed on the orange; others are the Mourning Cloak, the Question Mark, and the Red-spotted Purple. The BugLady puts out oranges for the birds—orioles, house finches, catbirds, and several species of woodpeckers eat the pulp. It’s a hoot to see young Red-bellied woodpecker perched by an orange, being fed by a parent bird.

But the action doesn’t end at sunset. The BugLady often tippy-toes out to check the front and back feeders before she goes to bed (another in an on-going series of reasons why she is glad not to have nearby neighbors, who might wonder at the random flashes of light from the back yard).

There are a variety of baits employed by entomologists to attract insects for a census. They might be mixtures of beer, yeast, sugar, very ripe bananas or other fruit, and a variety of other substances, deployed in dishes, smeared on tree trunks, etc. The BugLady guesses that ants, flies and German yellowjackets and raccoons would be the first and most numerous guests at the table, but that some interesting stuff would come to the night-time table. Here are some of the BugLady’s night visitors.

Ants of several species excavate the orange. By day, some of the larger Formica-types ants share with diurnal insects. By night, small golden ants with large abdomens cover the orange-tops. 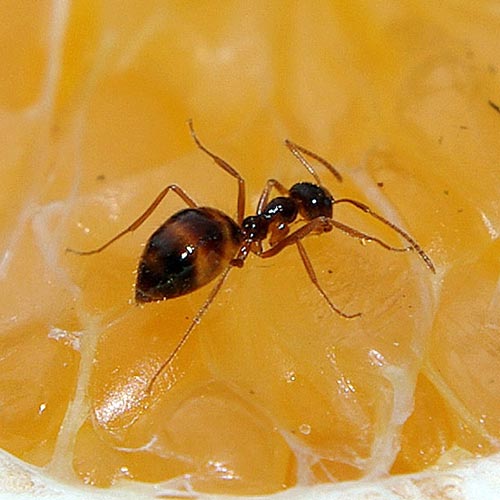 Earwigs, which are taking over the world and are now found in the BugLady’s house year-round, are harmless nocturnal omnivorous scavengers whose chewing mouthparts allow a diet that includes organic debris, other insects (they stalk aphids by night), and plants (they occasionally stalk milkweeds and some fruit—including oranges, apparently—and garden plants). 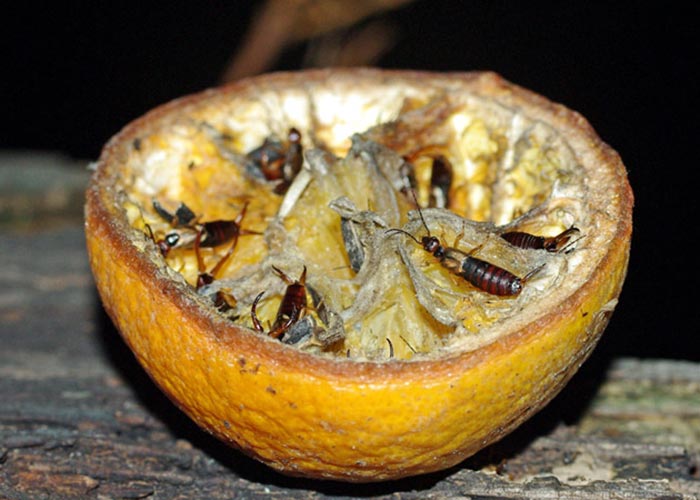 The Underwing moths have a secret. Beneath their very-well-camouflaged front wings lie brightly-striped (pink or orange and black) hind wings. The theory is that when they are startled by a predator, the sight of those striking wings startles the predator and throws it of its game. 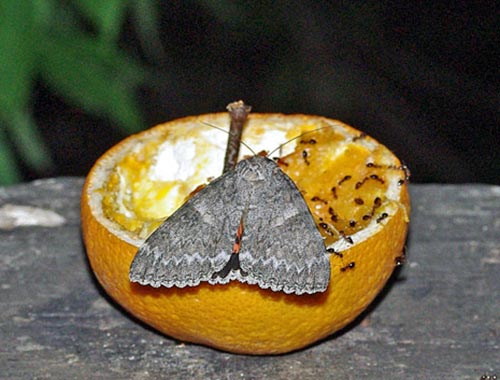 The BugLady would like to thank the scientists who christened the Underwings, whose names include the Girlfriend, Inconsolable, Sweetheart, Obscure, Sordid, Sweetfern, Darling, Mother, Aholibah, Widow, and about 100 more in North America alone. 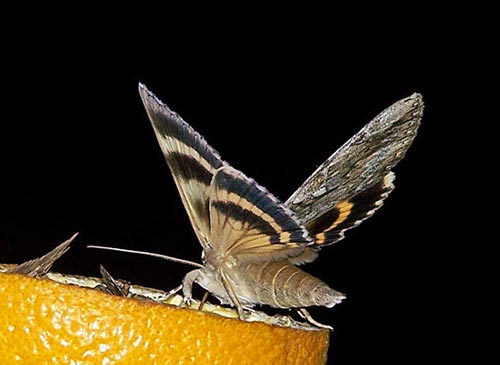 The BugLady was not acquainted with the Zale bunch until she photographed the Horrid Zale on her porch earlier in the summer. She thinks this may be the Green-Dusted Zale. Not many moths besides the Zales’ have those spiffy, scalloped wing edges. 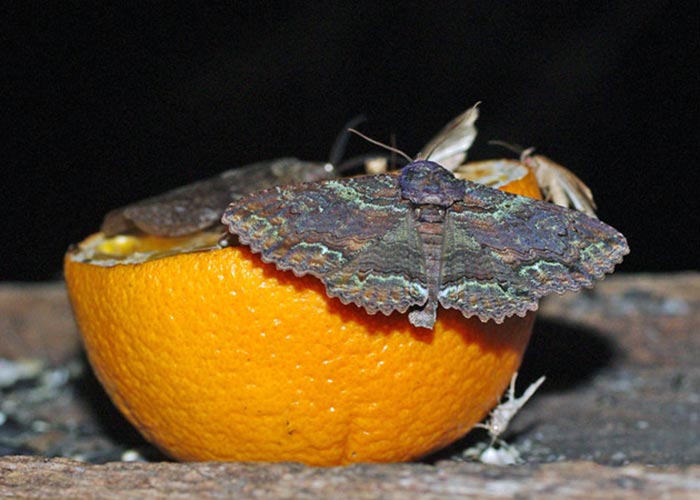 Another Zale—hanging out with a bunch of anonymous, small-ish moths. Remember—only 5 to 10 percent of Lepidoptera are butterflies. 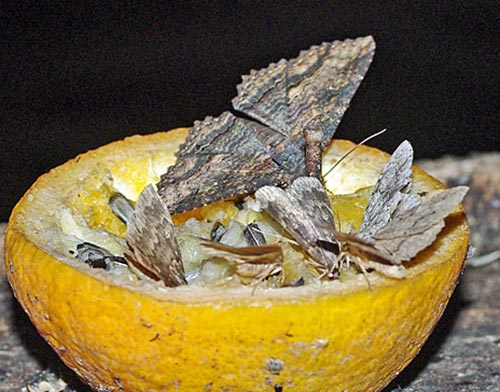 Daddy Long-Legs do not imbibe orange juice—they are predators cruising for the orange-eaters. Maybe they’ll do the BugLady a favor and eat the earwigs that are on the orange. 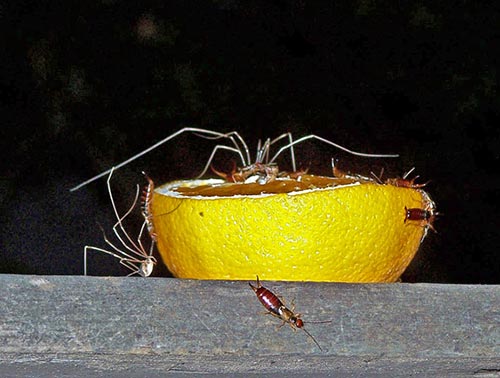 The biggest surprise of the summer was the arrival on the oranges of several large (close to 3” wingspan) and prehistoric-looking Fishflies, which the BugLady had never recorded there before. Fishflies are Neuropterans (nerve-winged insects), as are lacewings, alderflies, dobsonflies/hellgrammites, and some real oddballs like owlflies and mantidflies. The feathery antennae on the horizontal specimen mark it as a male. Their aquatic young are carnivores, and most references say that adult fishflies eat little or nothing. They’ll change their minds when they see this picture! 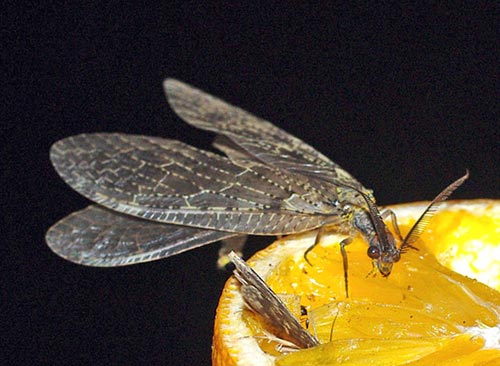 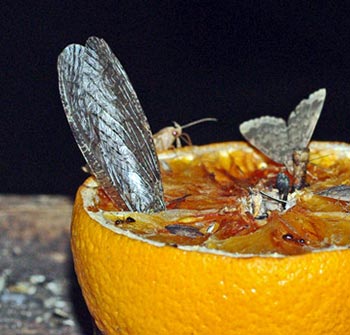 The BugLady has been seeing lots of Carolina Locusts hovering in the air, crepitating, hoping to attract the babes. BOTW is archived at the websites of the UWM Field Station and Riveredge Nature Center. You can find out more about Carolina locusts in the folder marked 51 – 100 at the UWM site.