These prehistoric-looking insects are members of the order Neuroptera (nerve-wing), named for the network of veins in their wings. The order embraces oddballs like mantisflies, snakeflies, antlions, and owlflies, but it also includes the more familiar alderflies, fishflies, and dobsonflies. These last three are, increasingly, split off into their own order—Megaloptera (mega-wings), but we’ll consider them together. Nerve-winged insects tend to be soft-bodied, nocturnal, awkward fliers. They have complete metamorphosis—egg to larva to pupa to adult—involving a complete change of appearance.

Green lacewings are small beauties found clinging to grass stalks or sitting near porch lights. Sometimes called “stinkflies,” they can release a bad smelling chemical when they are handled. For all their fragile appearance, both the immatures and adults are effective and ravenous predators. Referring to larval lacewings in his Field Guide to Insects of North America, Kaufman says that “with their tong-like jaws, aphid lions skewer their victims, and then suck them dry.” He goes on to describe the habit of some species whose larvae are hairy/spiny to “pile the dry carcasses atop their bristly backs or decorate themselves with other debris.” These “trophies” disguise the aphid lions and allow them to sneak in under the radar of the ants that farm aphids (more about that in a later episode). They are considered to be important controllers of pest insects. Lacewing eggs are laid on vegetation on the ends of hair-like stalks, and the larva eventually pupates in a spherical cocoon. The BugLady recognizes, in the picture of the lacewing larva in Kaufman’s book, the wee beastie that, during her entire life, has been dropping out of trees and biting her. 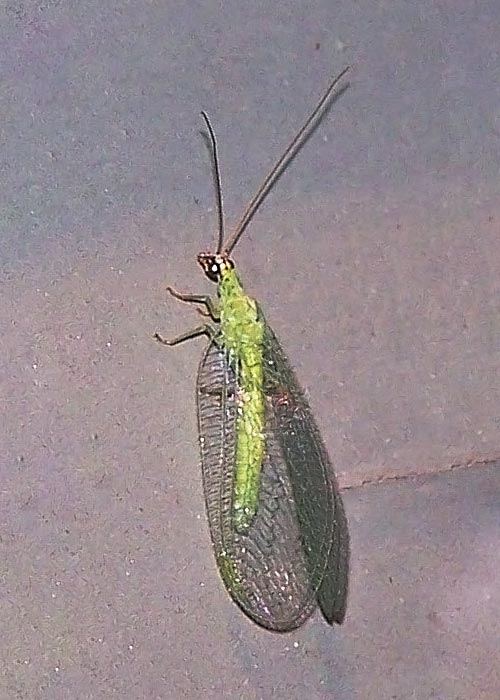 Fishflies, weighing in at 1 ½ inches in length with a 2-plus inch wingspan, are smaller than their more dramatic cousins, the 5 inch long dobsonflies, (the adult male dobson’s huge jaws are just for show, but the smaller-jawed female will bite, memorably, when handled). When startled into (weak) flight during the day, they might be mistaken for a mid-sized dragonfly. 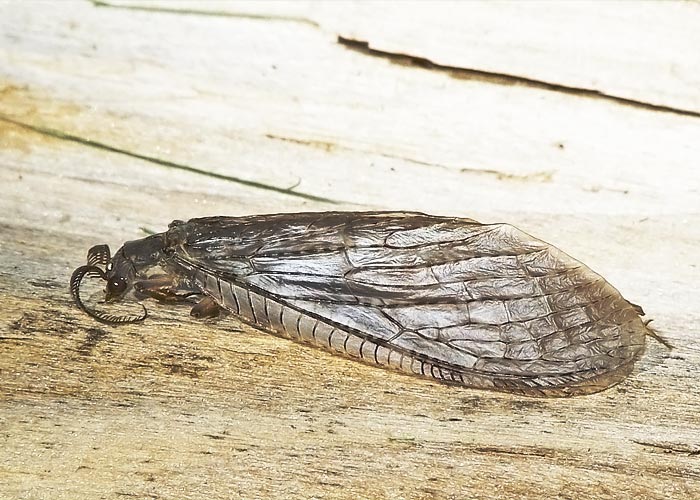 Eggs are laid and are glued together (nocturnally) in damp spots—logs, rocks, twigs, the undersides of leaves—above/near quiet water, and when the young hatch (nocturnally) they drop/crawl into the water. The larvae of both dobsonflies and fishflies are called hellgrammites. Hellgrammites have a plan A, B, and C for breathing. A: When on land, they can breathe through spiracles like terrestrial insects (but they’re too smart to try that underwater); B: Underwater, they absorb, through their soft skin, oxygen that is present in the water; C: The filament-like fingers that protrude from their sides are gills. Some deluxe models include additional plans—gill-tufts at the base of the filaments, and/or breathing tubes that reach to the surface.

When, after one to three years, the hellgrammites are ready to pupate, they do it in synchrony with others in their age class. Within a few days, the whole cohort abandons the water (in a sometimes-dramatic migration) to pupate on land. They pupate underground in spaces that they excavate. In his excellent A Guide to Common Freshwater Invertebrates of North America, J. Reese Voshell, Jr. notes that vibrations caused by thunder storms may stimulate the exodus of mature hellgrammites that are ready to pupate! 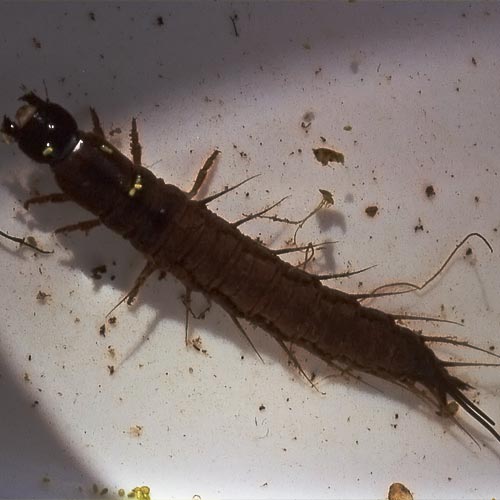 Although the immatures are aquatic predators with impressive mandibles, the adults either do not feed or are vegans that feed minimally on liquids.