The BugLady has always enjoyed mullein plants (Verbascum thapsus). Oh, she knows that they’re sun-slurping aliens whose mission is to blanket the earth at the expense of native vegetation, but they produce cheery yellow flowers, and they stick out of grassy fields like skinny saguaro cacti. Their common names—names like feltwort, blanket-leaf, lungwort, candlewick, torchwort, Hag’s taper, and Quaker rouge—testify to a long history of human intersection. Quaker rouge? In the olden days, when her sweetie came for a visit, a Quaker girl might rub a hairy mullein leaf over her cheeks (the resulting maidenly blush was caused by a mild contact dermatitis). Mullein’s thick leaves provided winter insulation when stuffed into moccasins and leggings; the midrib of a dried leaf served as a wick in an oil lamp; and Roman soldiers burned the dried stalks (dipped in tallow) as torches. Mullein has been used medicinally and for magic spells both by and against witches, and two thousand years before “Blonde Jokes” (as far as we know….), Roman women went blonde using hair dyes made from mullein flowers. The seeds, which contain rotenone and coumarin, were (and still are) thrown into ponds in order to harvest fish.

Bumblebees are the most important pollinators of the flowers, where they seek nectar and pollen. Other insect visitors, which seek pollen, include Halictid bees and Syrphid flies. An unusual group of bees, consisting primarily of Anthidium spp. (Carder Bees) in North America, use the fuzzy hairs from the foliage as a water-proof lining in their nests.

Emerald-hued Sweat Bees (Halictids) feeding on pollen and also collecting it to provision the incubation cells of their offspring. They are native pollinators. 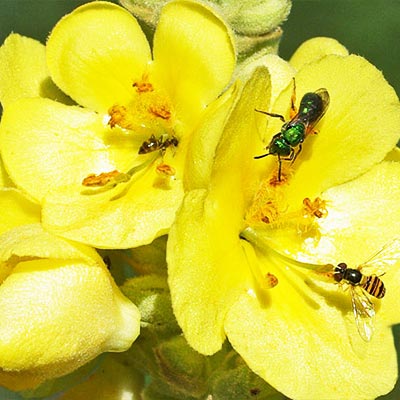 Smooth, shiny Syrphid Flies (AKA Hover flies and Flower flies), bee-mimics that hover and then touch down for a meal of pollen. Some species of Syrphid flies fly early, visiting pussy willows in April. 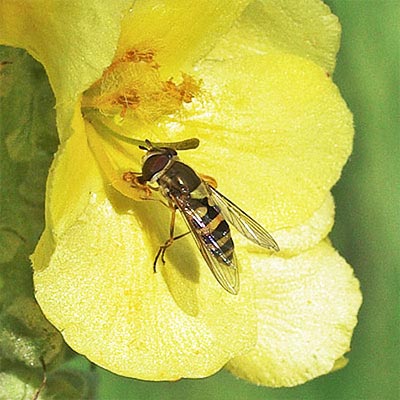 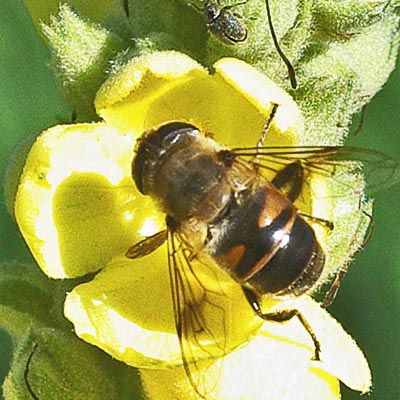 Plant Bugs, which are found everywhere and which are mostly plant juice eaters (this one is probably genus Lygus, in the family Miridae). This guy/gal needs mouthparts long enough to extend through the fluff to the actual plant. 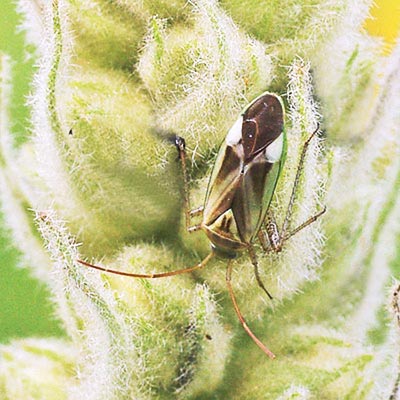 Small, worker Bumblebees, frequent flyers who carry a dusting of orange mullein pollen in their hair and who also pack pollen into baskets on their legs to take home to their colony. The BugLady thinks that it looks like fun to be a bumblebee. They “buzz pollinate” some species of flowers—that is, they grasp the flower with their mandibles and vibrate the flight muscles inside their thorax. This shakes the male flower parts (anthers) so that the pollen rains down. Buzz pollination is very efficient for plants in the potato and blueberry families, and honeybees rarely practice it. 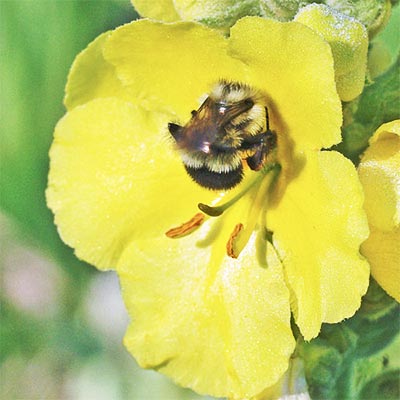 Grasshoppers come to perch and eat, ants visit the flowers and so do honeybees, and thrips burrow down through the fuzz for a mullein-juice meal, but the BugLady does not recall ever seeing a butterfly on mullein.

That mullein is a bug magnet is confirmed by the robber flies, spiders, daddy longlegs and other predators that hang around on them.

The BugLady is always on the lookout for bugs that are too still or that are hanging precariously from plants. If you look closely, you can just see the Crab Spider legs holding the inert bumblebee. 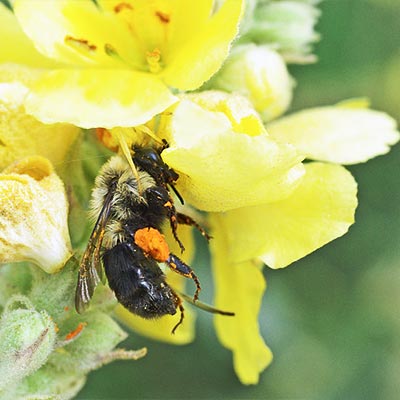 Like the crab spiders, carnivorous Daddy Long-Legs use stealth, not webs, to catch their prey. Web-spinning spiders work the leaves, too. 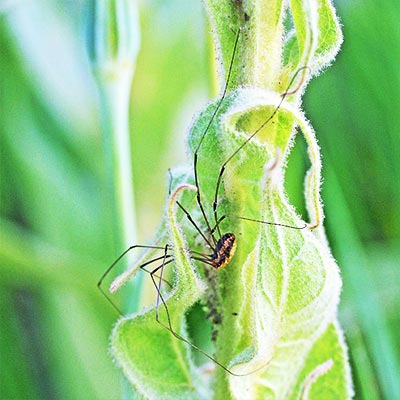 Some insects are generalists that visit simply because a plant is there, and others are intimately linked to specific plants. Mullein produces generous amounts of pollen and nectar, and it flowers in mid-summer during a bit of a blooming lull. Bees and flies that collect and/or eat pollen and nectar love the flowers, but the BugLady did find one Mullein Specialist, the Mullein Seed-eating Weevil.

The little (¼”), round, fuzzy Mullein Weevil or Mullein Seed-eating Weevil (Gymnetron tetrum) is a European immigrant that was recorded in surveys in Pennsylvania even before 1876. The MSEW is used in the US to help control invasive mullein populations (BugFans can buy 105 MSEWs on-line for $80). The BugLady is leery of introducing one alien to eliminate another—there have been some spectacular slip-ups, and it’s a genie that simply can’t be put back into the bottle. But for now, the MSEW seems to nosh only on two species of Verbascum—the common mullein and the equally-alien moth mullein (V. blatteria)—and it clearly favors the first. 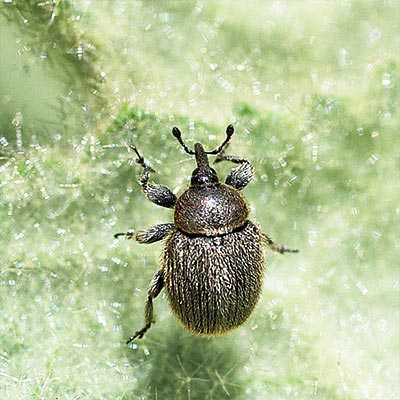 Common mullein, a biennial, produces between 100,000 and 180,000 seeds per plant in its second growing season (its first year’s growth is a ground-hugging rosette of big, furry leaves). Its hairy leaves keep it from being grazed by mammals as it takes over grasslands and disturbed areas. MSEWs (mullein’s only seed predator) insert a few eggs into a seed pod. If it gets too crowded in there, the weevil grubs will cannibalize each other, and no more than two adults will emerge from any pod. The adults graze on both the seed pods and the leaves, and they spend the winter tucked into an old seed capsule.

How effective are they? The larvae consume 100% of the seeds in the pods they occupy, but the MSEWs’ egg-laying fervor fades long before the mullein plants have stopped blooming. Even at the peak of egg-laying, not all seed capsules are home to MSEW grubs (research suggests that MSEWs may favor the more robust plants in a mullein population), and one study found that only 40% of MSEW eggs may be viable in the first place. Mullein produces a prodigious number of seeds, seeds that can wait in the soil for a century for the right growing conditions (scientists working a 1,300 year old archaeological dig claim to have germinated some of the mullein seeds they found there). So, even though MSEWs consume about half of the seeds produced annually, a world without mullein seems unlikely.