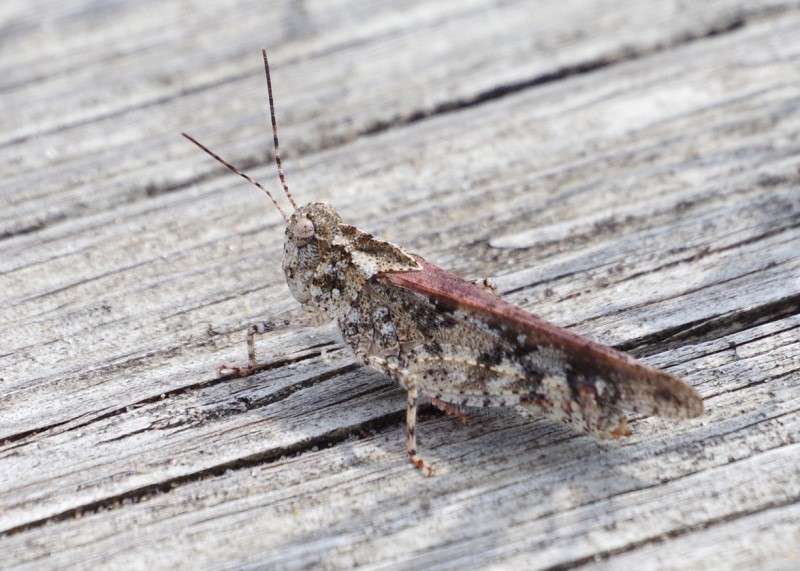 From July into September, the Creeping Juniper Nature Trail at Kohler Andrae State Park is ruled by grasshoppers, and the BugLady had lots of fun chasing them around this summer (she stayed on the boardwalk, of course) (well, until the Swamp Darner flew past). She especially liked the aptly-named Mottled sand grasshopper (Spharagemon collare). MSGs are not restricted to Lake Michigan dunes, they have a range that stretches from Arizona and New Mexico diagonally back through the northern Great Plains and the Great Lakes, and well into Canada. Plus, inexplicably, North Carolina, Delaware and Maryland. Within that wedge of North America, they’re found in sunny, sparsely-vegetated areas with dry, sandy, and/or disturbed soils. They’re especially common along the edges of wheat fields, says Wikipedia. 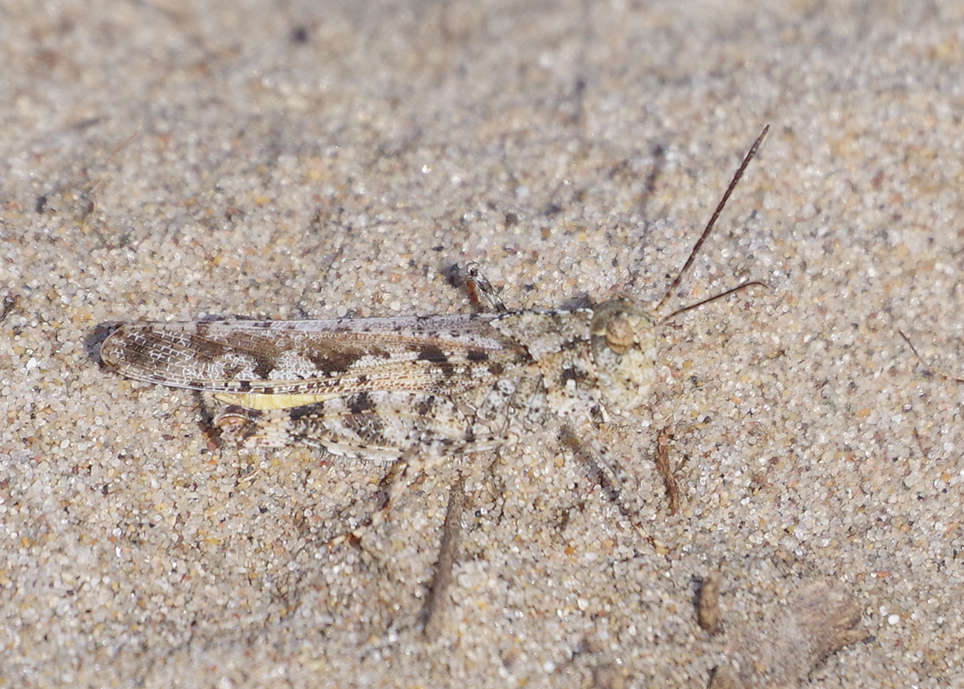 MSGs can vary quite a bit in appearance, and that’s probably tied to the habitat they live in. They have banded, yellow wings, and their hind tibias are red. They can be a speckled gray, tan, brown, or even reddish, depending on the soil they sit on, and some morphs are “collared.” Habitats that are less sandy and more vegetated have “plainer” grasshoppers (they’re not like tree frogs or goldenrod crab spiders that actively change colors, it’s just that the grasshoppers that match their background survive to pass along their genes will produce more grasshoppers that look like themselves, and regional color morphs are born).

When a territorial male sees another grasshopper, he approaches and stridulates a few times (rubs one part of his body against another part – in this case, the hind leg against the forewing). If it’s another male or a different species of grasshopper, he will attempt to oust it from the area. A female who’s not in the mood will shake a hind leg and stomp on the ground (similar to the signals a male sends to an intruding male). If the female is willing, they mate, and then she uses her abdomen to excavate about a half-inch into the soil. She oviposits (each egg pod contains about 25 eggs) and then camouflages the hole by brushing sand and debris over it. MSGs overwinter as eggs and hatch in late spring/early summer. 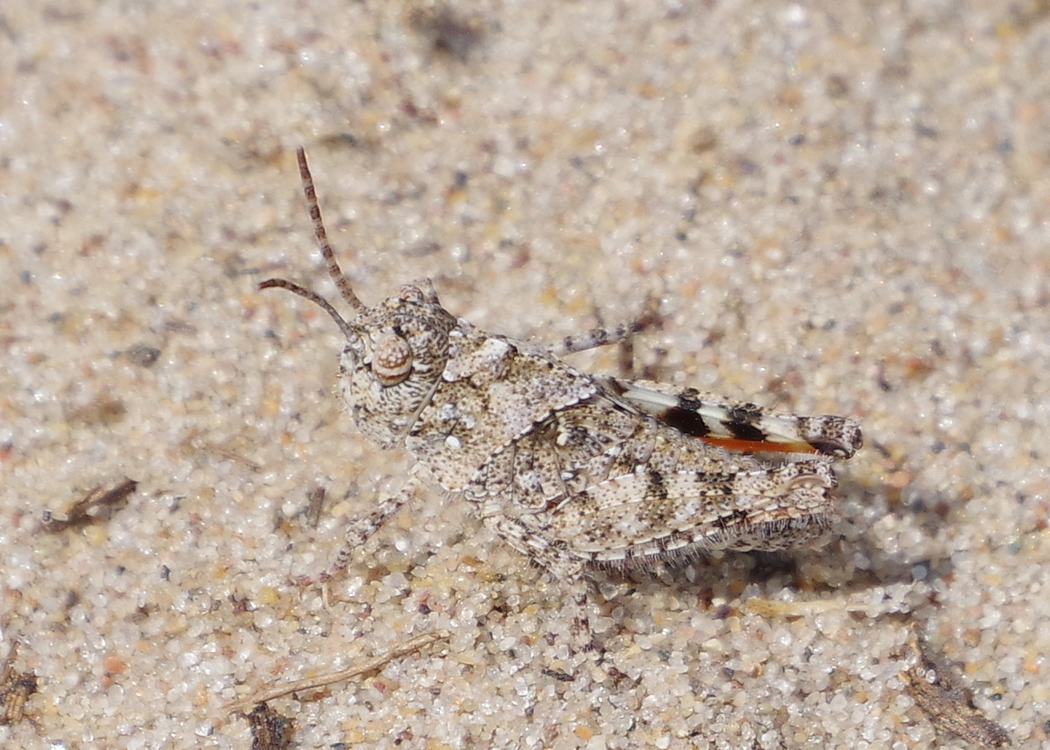 It takes MSG nymphs about six weeks to reach the adult stage, and males mature faster than females. They tend to stay in the same area where they hatched, and adults may be present until the first frosts.

Their eating habits get them into a little trouble with farmers and ranchers in the western part of their range, but they usually don’t occur in high enough densities to be called pests. For the most part, they feed on pieces of prairie grasses and a few wildflowers that they find on the ground. MSGs may reach up with their front legs and pull down a grass to feed on, and they sometimes climb up onto a grass stalk to sever a leaf or stem, but they feed on it after they climb down again. 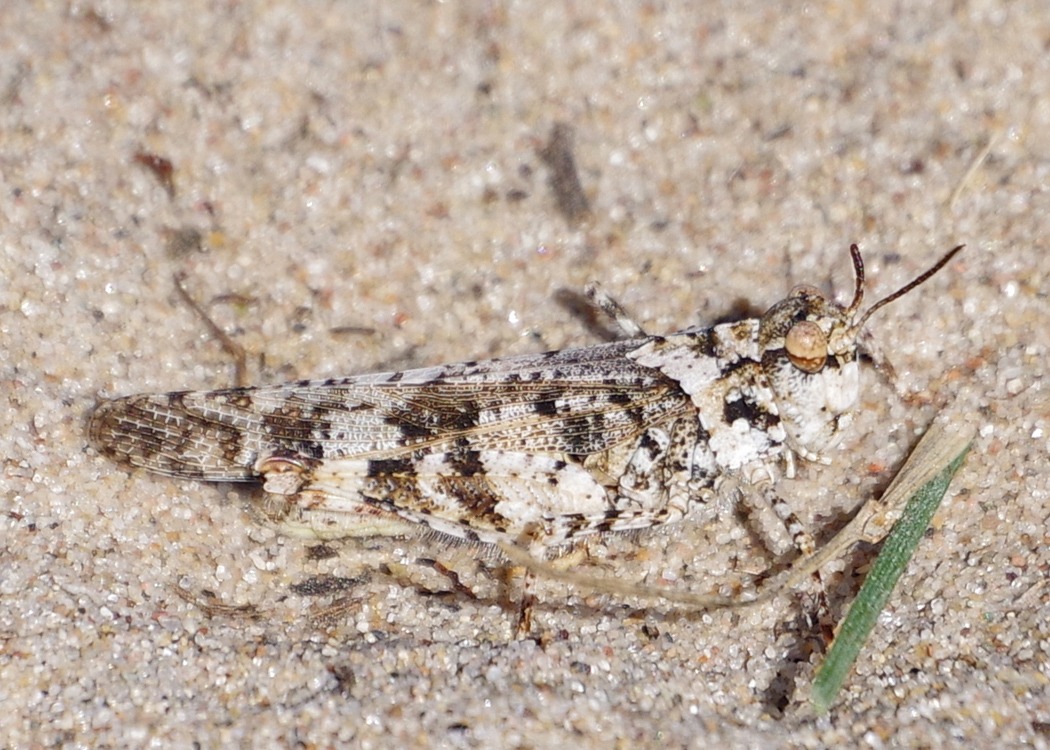 They are good flyers, and a male sometimes makes a buzzing sound as he flies (crepitation – a clicking or snapping noise made by the wings). They also crepitate when they’ve been startled into flight, during courtship, or when they’re defending their territory. One study in Colorado clocked sustained flights by males at three to eight feet and by females at nine to ten feet, but in a Michigan study, researchers saw males flying 100 feet and females farther than that, and at heights up to 30” above the ground. Despite their strong flight, they are geophilus (today’s vocabulary word) meaning “ground-loving.”

MSGs are diurnal (active during the day), and they spend the night on the ground in the open, under a thatch of grasses, or up in a plant. They wake slowly, warming up by basking for a few hours before they become active, exposing first one side to the sun and then the other. When the temperature on the ground gets too hot (over 100 degrees F), they rest in the shade and emerge in late afternoon as the ground cools a bit. They bask again before sheltering for the night.

Side note – spiders are using the mild spell to change locations – the BugLady sees the slender strands of spider parachutes on her shrubs each morning.

(and – oops – the BugLady used a picture of an MSG in an earlier episode, mistakenly ID’d as a Seaside grasshopper)

Artist-in-Residence at the Field Station