Moths Without Bios – in Camo

The BugLady would like to give a shout-out to Riveredge Nature Center, whose gray buildings are so moth-worthy (and for other reasons, too). She has found lots of good stuff there over the years.

Moths in the family Geometridae get their name from the Greek words for earth and measurer—a nod to the way their caterpillars locomote. Butterfly and moth caterpillars typically have three pairs of true legs on the thorax, a few pairs of stubby, fleshy prolegs tipped with tiny hooks at the rear end, and additional prolegs on some of the abdominal segments. True legs are jointed and work with muscles; prolegs are not jointed and are extended and retracted via hydraulic pressure. The hooks (a.k.a. crochets) are great for gripping. With all these appendages, most caterpillars undulate along, but Geometrid larvae are shy three pairs of prolegs in the middle of their body. Their resulting gait—anchoring the rear prolegs, extending the front end and then hitching the rear end forward toward the head—has earned them nicknames like inchworm, measuring worm, looper, and spanworm. Geometrid caterpillars tend to be twig-mimics (and they come with markings that resemble the “lenticels,” “bud scale scars” and other bits of the anatomy of a twig), and their elders are often well-camouflaged, too.

There are a lot of Geometrids—more than 35,000 species worldwide, with 1,400 of those in North America (remember, of the approximately 175,000 species of Lepidopterans worldwide, only about 18,000 are butterflies). As a group, they are smallish, nocturnal moths that can tolerate some pretty chilly spring or fall weather. Females of some species are flightless and even wingless. Caterpillars feed on leaves of many woody and non-woody plants, and there are more than a few agricultural and forest pests in the family.

Wagner, in Caterpillars of Eastern North America, says that “loopers are among the most important forest lepidopterans in Eastern North America.” He goes on to say that “They are an especially important component of the spring caterpillar fauna of deciduous forests, where they are the staple in the diets of many forest-nesting birds.”
Unfortunately for both birds and caterpillars, Global Climate Change is throwing a monkey wrench in this timeless arrangement. Spring is coming earlier, in some cases 10 days earlier than it did a century ago. Early warmth can cause early leaf-out or early hatching of insects, sometimes before the leaves of their host plants have sprouted. Even if the caterpillars and their plants are in sync, a migratory bird’s wristwatch is set by the day length/number of sunshine hours, a measurement that is, as we all know from the frigid spring of 2013, independent of temperature. A number of scientific studies are starting to document what happens when insect supply peaks before birds arrive and nest.

They don’t rely on their feet to keep them on their food plants. Like jumping spiders, geometrid caterpillars spin out a silky line that protects them from free-falls. The compound that turns into silk is stored as a liquid in modified salivary glands until needed. Then it is pulled from spinnerets on the caterpillar’s “lower lip.” Geometrid caterpillars often anchor themselves to a plant while they’re feeding, and they may jump/drop off a leaf when they are frightened, playing out silk as they go. But what goes down, must come back up again, and Ralph B. Swain, The Insect Guide, explains what happens next: “…when alarmed will drop from the leaf they have been eating, at the end of a long silk thread spun from the mouth, and, in ascending this thread after danger has passed, wind it about the hind thoracic legs with the aid of mouth parts and fore legs.”

Geometrid caterpillars have a number of different plans for getting through the winter. Wagner continues “The majority overwinter as pupae, although our fauna also includes a number of species that pass the winter as larvae fully exposed on the bark of their food plant, repeatedly freezing and thawing. Others overwinter as eggs. A fair number of the spring-active species overwinter as prepupal larvae”

This BOTW is dedicated to four Geometrids who chose the wrong surface to sit on.

Not a lot is known about either the adult or the caterpillar of the Brown Bark Carpet (Horisme intestinata), although they are found from coast to coast and into Canada (in this case, carpet does not refer to a fondness for rugs; there are a number of Geometrids called carpets. Inexplicably.). There are two generations of BBCM’s a year; the majority of adults are seen in late spring and a small, second brood flies early fall. Most sources quote each other and say that the BBC caterpillar feeds on garden clematis vines, but Sogaard, in Moths and Caterpillars of the North Woods adds Virgin’s bower, a clematis-relative, as a possible host plant. The BugLady couldn’t find an explanation for the species name, intestinata, but the undulating, parallel lines on the wings may have suggested intestines.
As she has said before, Moth-namers are a fanciful bunch. 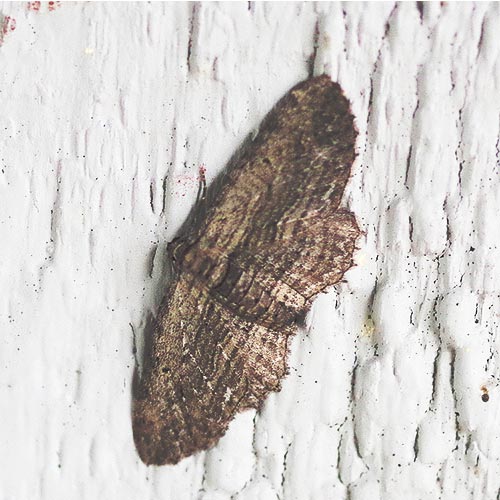 The False Hemlock Looper (Nepytia canosaria) can be seen, day or night, over much of North America from mid-summer until the first frosts. As its name suggests, its offspring eat the needles of conifer trees (which lands it on lists of forest enemies). Both the caterpillar and the pupal case (it overwinters as a pupa) are designed to blend into a “needle-y” background. The BugLady likes the checkerboard fringe on the trailing edge of the wings. FHLs are targeted by tachinid flies, whose parasitoid larvae inhabit the caterpillars. 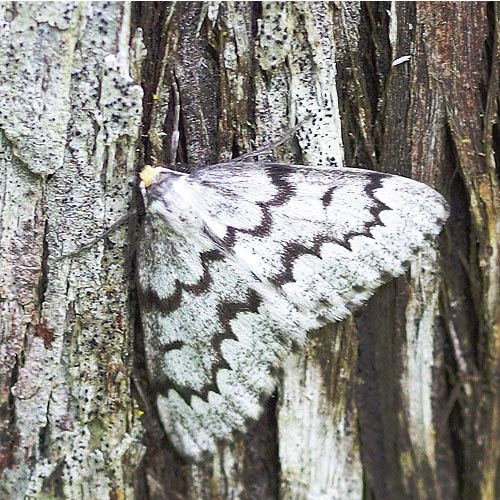 The caterpillar of the Porcelain Gray (Protoboarmia porcelaria), a.k.a. the Dash-lined Looper is found on conifers including cedar, tamarack, pine and spruce, but it also feeds on deciduous trees like birch, oak, and poplar and a bunch of species of shrubs. PGs can be seen in the summer over almost all of North America (except for the extreme far northern bits). Descriptions of the caterpillar include terms like phyllophagous (leaf-feeder), free-living defoliator (it wanders around on the foliage it eats), and innocuous solitary defoliator (relatively harmless, doesn’t eat family meals with its siblings). Caterpillars overwinter as late-stage larvae and resume feeding in spring. They do not build a winter shelter or adjourn to the leaf litter below, but just tough it out on a bare branch or on bark, pretending to be a twig (and that’s why nuthatches and chickadees forage in tree branches in winter). 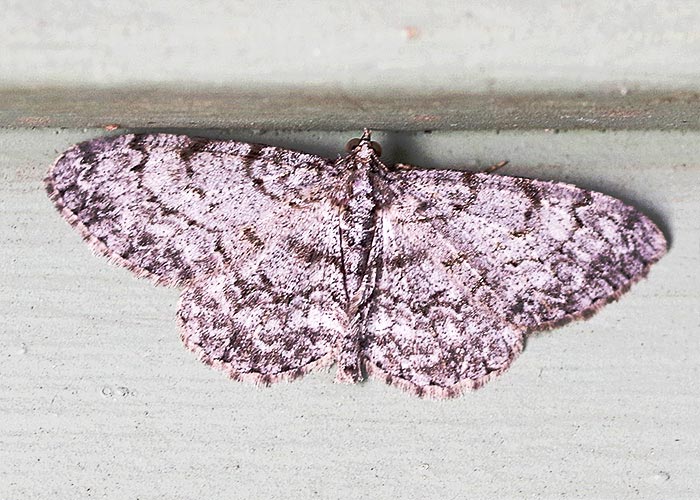 There are two generations per year; and according to Wagner, the summer-generation caterpillars (and adults) are noticeably smaller than those that result from larvae that overwinter.

The awesome Common Lytrosis (Lytrosis unitaria) is well-nigh invisible when it’s sitting where it should sit. Females are larger and grayer than males. CLs are found over much of eastern North America, where their caterpillars eat leaves of hawthorn, maple, oak, and some other woody plants in late spring. They overwinter as pupae, and Wagner reports that if you pinch a pupa, it contracts, increasing turgor, making it look more twig-like. 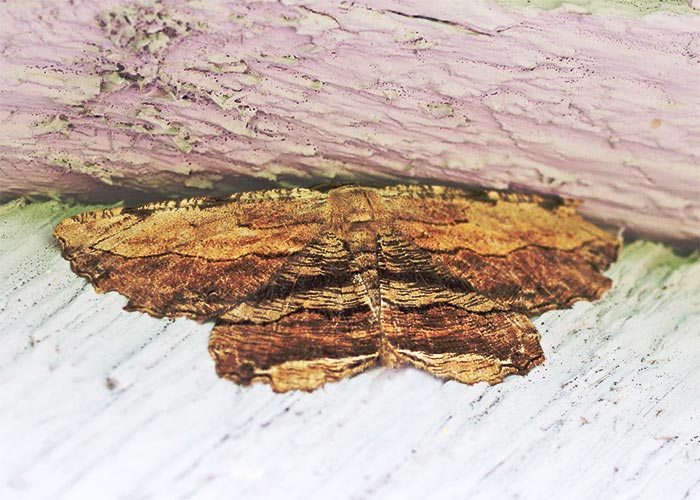 Wagner also says “Like other twig mimics, it has a ‘belay’ line that it attaches to the stem. If tugged, this single strand can be pulled from the caterpillar’s mouth at a rate of several centimeters per second.”

The staid Dr. Swain reports that “There is considerable evidence to support the prevalent belief that the finding of a measuringworm on one’s person presages new raiment.”

And speaking of caterpillars, Wooly Bear caterpillars are abroad on the land. Find out more about their meteorological talents.