Two moths—one a tiger and the other an owlet; one common and cosmopolitan and the other in peril due to shrinking habitat; both sporting rich, saturated colors (and they both have neat genus names).

Golden Borer Moths (Papiapema cerina) are in the Owlet Moth family Noctuidae, which is the largest of the moth families (Thanks for the ID, Les). There are 47 species of Papiapema; all of them live in North America, and entomologists are still finding new species. 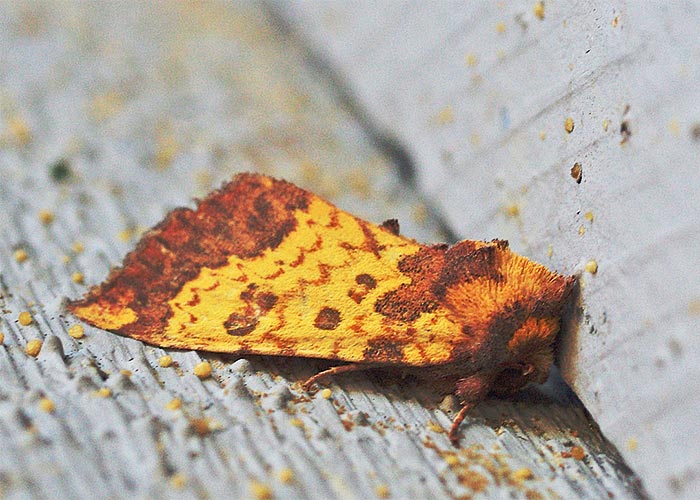 The GBM is one of a genus of picky eaters—moths whose specialist caterpillars are attached to one plant or group of plants and who are often named after that plant. Among the Golden Borer’s extended family are the Blazing Star, Cow Parsnip, Coneflower, Meadow Rue, Aster, Burdock, Ironweed, Columbine, Sunflower, and the Cup-plant borers, and, amazingly in this group of prairie enthusiasts, the Bracken, Mayapple, Sensitive Fern, Osmunda, and the Pitcher Plant borers.

So, Papiapema moths are found where their various caterpillar food plants grow, and many feed on prairie plants (the BugLady didn’t find anything about adult feeding preferences). Approximately one percent remains of that 140 million acre, pre-settlement ecosystem called the tallgrass prairie, so it’s not surprising that many prairie-dwelling members of the genus are included on lists of endangered species. The GBM is on “Special Concern” lists in Indiana, Illinois, and Michigan and is on New York’s “Hasn’t been seen in 15 Years” list.

GBMs are found in rich woods, tallgrass prairies, fens, and old fields, and they prefer a mosaic of habitats. Their rarity is attributed to habitat loss, habitat degradation, and to fragmentation, in which small chunks of suitable habitat remain but are isolated from other chunks by development, agriculture, etc. Unlike other members of its genus, the GBM caterpillar eats a variety of foods, including Mayapple, bottlebrush grass, bulrush, and some members of the lily family; one source said that GBMs start on grass and switch to Mayapple or lily as they get older. They do their feeding on the inside, boring into the stems and causing plants to turn droop or discolor. There’s a great Blog entry describing one man’s discovery of GBM caterpillars in Mayapple stems and his attempts to raise them by stuffing them into hollowed out carrots. In the wild, Ms. GBM deposits her eggs near—but not in or on – host plants, and the larvae find them and burrow into the stem or root. They pupate in late summer and their flight period (they are not strong fliers) is in September and early October.

The Ruby Tiger Moth is a holarctic species (found in northern continents around the globe). It’s in the Tiger moth family Arctiinae. All RTMs in North America used to be considered a single subspecies of a European RTM, but some sources now say there are three species in North America. If so, the BugLady believes this is Phragmatobia fuliginosa. 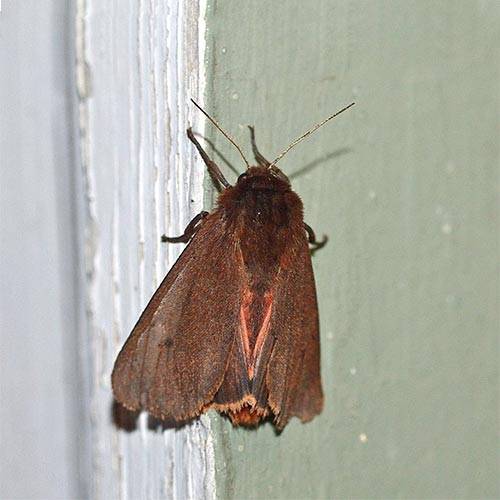 They are found in weedy damp-lands near rivers and marshes over the northern half of the U.S. and well north into Canada, and their range dips south at higher elevations in the Rockies and the Appalachians.

RTMs have a wingspread of about an inch. Their crimson underwings are hidden beneath rich, dark brown, sometimes reddish brown, forewings. (RTMs are not related to a large group of moths called Underwings that have striking patterns on their hind wings. Like the GBMs, Underwings are Owlet moths). The larvae look like strawberry blonde wooly bear caterpillars until they develop bands in their later instars, and they feed on common herbs like goldenrod, dock, plantain, sunflowers and skunk cabbage. Like wooly bears, they overwinter as caterpillars, pupating in spring. The consensus is that adults don’t feed, living off of fat they store as caterpillars.