Today’s installment in the on-going “Indoor Bug” series is the wee-but-elegant Moth fly.

Moth flies are tiny (around 1/8”) and hairy flies (order Diptera—“two-wings”) in the family Psychodidae. They have long antennae and their wings are scale/hair-covered and disproportionately large. They are weak flyers (outdoor species are easily blown by the wind) who often lurch about, as Monty Python used to say, “on all sixes.” Various species of moth flies are called drain flies, filter flies, and bathroom flies. The black wings of the Bathroom/Moth Fly (Telmatoscopus albipunctatus) are edged with tiny white spots like Christmas lights (from albi—white, and punctatus—point), and it holds its wings out to the side in a flat “V”. 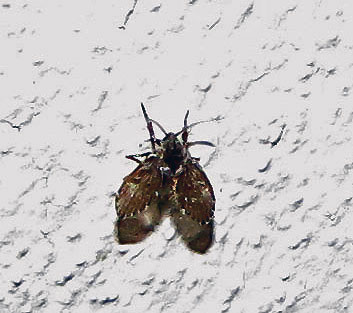 In their Field Guide to Insects of North America Kaufman and Eaton, who, to the BugLady’s knowledge have never been in her house, nonetheless describe her moth flies’ habitat perfectly—“they are seen perched on bathroom walls.” Outdoor species of moth flies, like their house-loving relations, prefer damp, shady habitats.

Moth fly generations are short generations, but new adults are constantly emerging, mating, and laying eggs, so there is a lot of overlap of generations. The larvae of many moth flies are at home in the wet film that lines plumbing pipes and in the traps of drainpipes (outdoor species often associate with sewerage treatment plants). The larvae dine on the gunk therein, eating tiny organisms like algae, bacteria, and fungi in the sludge. The adults breed and lay their gelatinous mass of eggs there (the author of Everything You Ever Needed To Know You Learned In Kindergarten once wrote that one thing that separates (human) Adults from Not-adults is the fortitude needed to clean the slimy stuff out of a drain pipe). The Moth fly is adapted to a habitat for which there is little competition.

Moth flies are generally considered to be harmless—unless you get turned off by thinking about where their feet have been (but hey, that’s your sink gunk they’re living in). There are some dissenters. There’s a reference to asthma being caused by inhaling quantities of desiccated moth flies in South Africa, but the BugLady never sees more than one moth fly at a time here in God’s Country, so she’s not too worried about that. Articles in the Transactions of the Royal Society of Tropical Medicine and Hygiene report that both a nasopharyngeal and an intestinal myiasis are caused by the larvae of T. albipunctatus (myia comes from the Greek word for fly). Those British and their myiases! Broadly, a myiasis is an infestation by parasitic fly larvae that feed on the host’s tissue, internally or externally. A quick detour into the world of myiases finds culprits with dynamite names like blow fly, flesh fly, bot fly, ox warbles, screwworm fly, tumbu fly and Congo floor maggot. The BugLady may regard these cute little moth flies with a more jaundiced eye when they reappear this summer.

The related sand fly is a bloodsucking fly in the genus Phlebotomus (really!) that is responsible for spreading a variety of unpleasant diseases in the Old World and in the tropics and near-tropics.

Random moth fly fact—when the larvae of T. albipunctatus are exposed to caffeine, there is a high mortality rate, and many of the survivors are stunted and rendered less fertile. Younger larvae incur more damage than older ones. The BugLady sincerely hopes that her tax dollars are not funding grants for experiments that caffeinate moth flies.