Butterflies, those “Charismatic Insecto-fauna,” have lots of fans, and some of the more popular species even have their own websites and Citizen Science projects. Along with moths, they belong to the order Lepidoptera (scale-wings—a nod to the flattened hairs that cover them). But fewer than 10% of the 175,000 (or so) species of Lepidopterans in the world are butterflies, and of the approximately 18,000 species in North America, only about 700 are butterflies.

The rest are moths, a sometimes spectacular, sometimes anonymous bunch of insects. Compared with butterflies, moths usually seem “hairier,” have feathery antennae, operate by night, and fold/tent their wings over their bodies when at rest. Usually. And they tend to spin a silken cocoon within their pupal case. Within the Leptdoptera is a group called the “Microlepidoptera,” an artificial (not anatomical) grouping of smaller moths with wingspreads under ¾ inch (sometimes way under). Field guides get a little “iffy” for the microlepidoptera.

Most of the moths in today’s collection showed up on or near the BugLady’s front porch recently. Outside of their presence on a variety of collection lists, biodiversity surveys, and photo sites, the BugLady can’t find a lot of natural history information about them in her library or on the web. They are small moths looking for their 15 minutes of fame Here, just a month late for National Moth Week, are:

Jumpy pairs of Yellow Nutsedge Moths (Diploschizia impigritella) (a.k.a. the Five-barred sedge moth) occupied leaves in the wet prairie in July, not far from their caterpillars’ main food plant, Yellow nutsedge/Chuffa. Caterpillars bore into the stems of yellow nutsedge and several other sedge species. According to bugguide.net, the genus name comes from the Latin impiger meaning active, quick, energetic, which certainly describes the moths that the BugLady was chasing around. The spread of their fringed wings is about ½ inch. They are in the Sedge moth family Glyphipteridae (notched wing) and are found over much of North America, except the Great Plains. 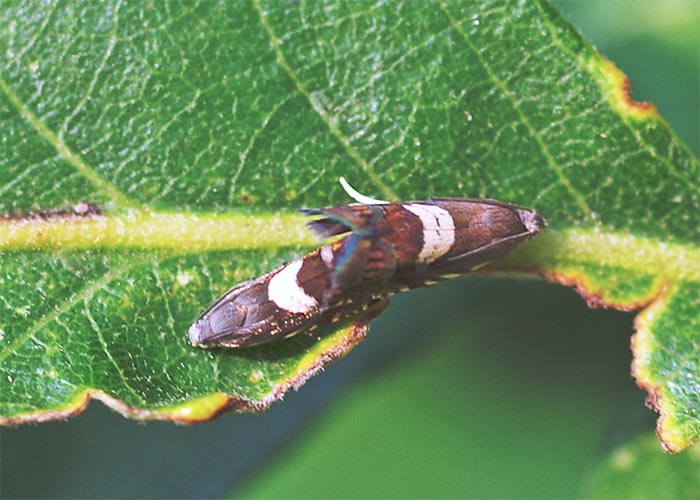 Yes, the BugLady often takes the camera out into the field when she is watering the dog, and that’s how she photographed this lovely Orange-Spotted Pyrausta (Pyrausta orphisalis) (a.k.a. the Orange Mint moth), in the Crambid Snout moth family Crambidae. OSP caterpillars feed on leaves of members of the mint family, like Monarda, throughout North America. One paper suggested that they are actually beneficial to commercial mint/mint oil operations because leaf-grazing by the first generation of caterpillars stimulates the plants to produce more mint oils, while the subsequent generations prefer the flower heads (and oils from the flowers are less desirable than leaf oils). 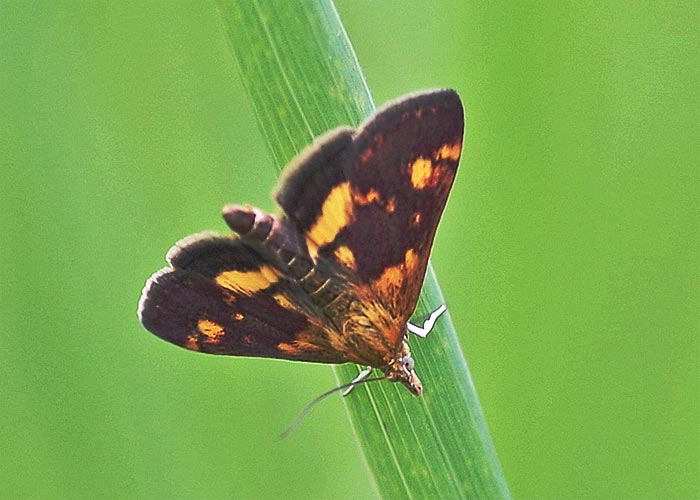 Lots of moths with fancy forewings have drab hind wings (and vice-versa), but not this beauty! The Bog Lygropia (Lygropia rivularis), also a Crambid moth, favors wet areas from southern Canada to the Near South (but possibly not the Deep South), and it apparently flew at least a quarter-mile from the nearest wetland to the BugLady’s porch light. The host plant of BL caterpillars is unknown. That’s it—that’s all the information that the BugLady could find about the BL. 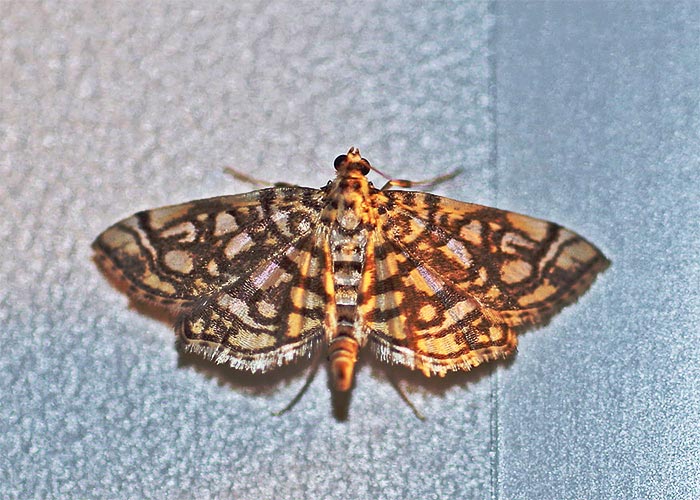 Words like “sleek” and “silky” aren’t typically used to describe moths, but doesn’t the Snowy Urola look touchable! (For a really classy picture). The Snowy urola (Urola nivalis), another Crambid moth, is found from Maine to Texas. Its caterpillars are considered pests on a non-native ornamental shrub called Privet, but they are also said to feed on grasses. The BugLady’s “ornamental plantings” are not the type that are regularly visited by the House and Gardens crew, and she has no idea where this quirky little moth is finding Privet. 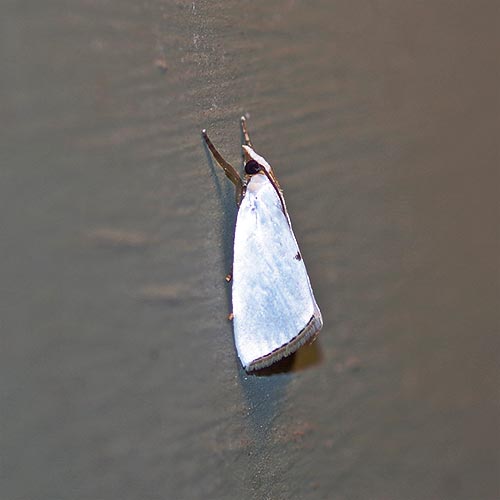 The aptly-named, day-flying White-Striped Black Moth (Trichodezia albovittata) (white line/stripe), in the family Geometridae (earth measurers), is easily mistaken for a butterfly. Geometrid caterpillars are often called “inchworms” because of the way they move across the landscape; the WSB caterpillar’s landscape of choice is primarily leaves of plants in the Impatiens/Touch-me-not family. Adult Geometrids are equipped with tympanal hearing organs (ears) on their abdomen but no “vocal” ability. They hear but they do not speak. In Moths and Caterpillars of the North Woods Jim Sogaard says that “This moth still has very sensitive ‘bat detectors’ (ears) suggesting that it has become day-flying relatively recently. A good candidate for key-jingling. In flight the boldly contrasting pattern creates an elusive flickering effect.” (About “key-jingling” Sogaard says “you can trigger bat-evasion behaviors by jingling a ring of keys near flying moths. The key-jingling sound contains ultrasound which can cause dropping, diving or spiraling flight in moths with ears. Bat detectors can make the ultrasonic calls of bats and moths audible.”) 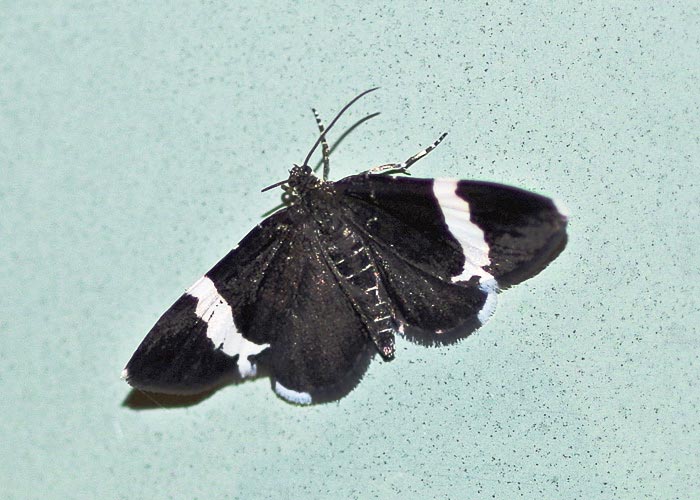 What a spiffy little moth! The Boxwood Leaftier (Galasa nigrinodis) is in the Snout moth family Pyralidae, and it is found from the Rockies to the Atlantic. Its species name, nigrinodis, means “black knot,” possibly a reference to the Percheron-like tufts of hair on its front legs. Again, in a landscape without decorative hedges, the BugLady can’t imagine where this quirky little moth is finding the non-native boxwood shrubs that are its sole larval host (although there are suspicions that the related native, Alleghany spurge (Pachysandra procumbens), which is planted horticulturally in some parts of the country, may also host the caterpillar) (the BugLady doesn’t have any of that, either). Caterpillars tie the leaves of their host shrub together and then feed on them.

With a nod to the drawbacks of “picture-keying,” the BugLady recommends the Peterson Field Guide to the Moths of Northeastern North America by Beadle and Leckie and Moths and Caterpillars of the North Woods by Sogaard for your moth adventures. Not much natural history info in the Peterson, but great pictures of a whole lot of species, large and small, that may help you to ID a moth so you can find out more about it.