OK – it’s September, but the bug season isn’t over yet.

Outside of wetlands, if there’s anything better than a walk on the prairie, surrounded by Big Bluestem grass, with big Common Green Darners and Black Saddlebags dragonflies overhead, the BugLady hasn’t found it yet. Here is another batch of summer images, mostly from prairies.

Look for the AMERICAN RUBYSPOT (one of our classiest damselflies) near running water. Yes, the male is spectacular, but the female is no slouch, either.

ANT AND GRASSHOPPER – When Aesop wrote the fable about the grasshopper and the ant (you remember it – the ant prepares for tomorrow while the grasshopper fritters), this probably wasn’t what he had in mind. The largish ant and the smallish grasshopper were going home for dinner together. 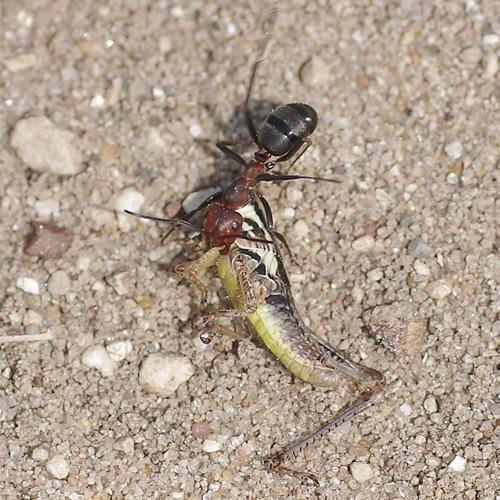 CAROLINA LOCUST – This is the large, very well camouflaged grasshopper/locust that jumps up in front of you as you walk in the prairie. Its flying wings are inky, with cream-colored margins, reminiscent of a Mourning Cloak butterfly. Males advertise for mates by hovering above the grass-tops and making a rattling/crackling/snapping/clicking sound (it’s called crepitation) with their wings. It looks like it was carved out of stone. 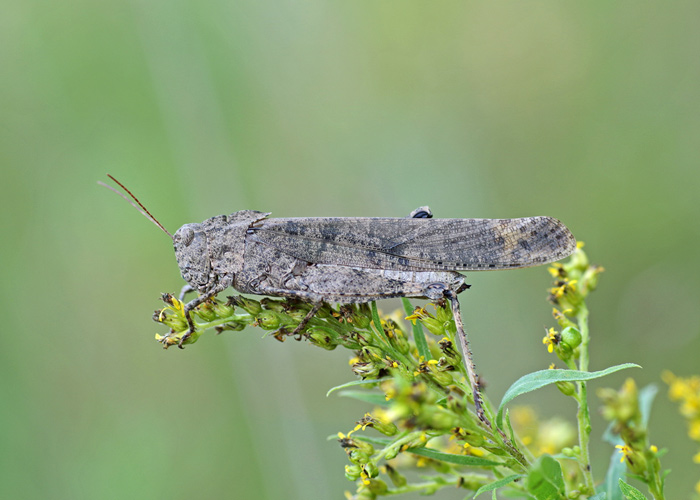 BLACK SADDLEBAGS DRAGONFLY – Any day now, Black Saddlebags and Common Green Darners will set their course for the South and sail down the Lake Michigan coastline in a steady stream. Only 15 of the 460+ species of dragonflies and damselflies migrate, and it’s a grand sight. Local BugFans can watch from the bluffs at Lion’s Den Nature Preserve near Grafton as the dragonflies go past at eye level. 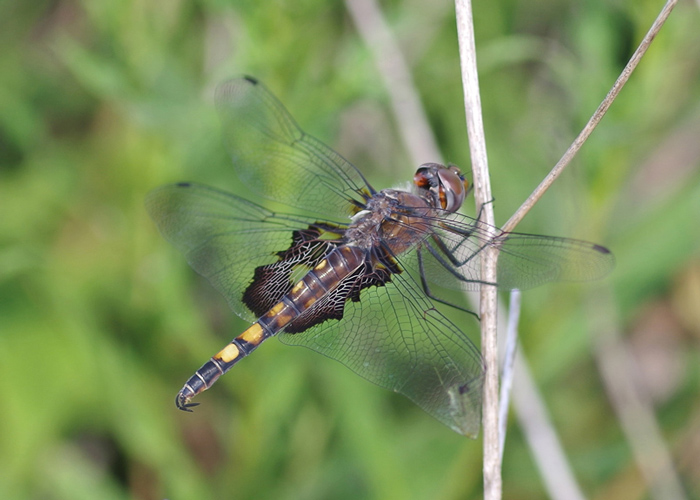 Mooned by JAPANESE BEETLES. They’re having a good year this year. These lusty scarabs were first seen in 1916 at a plant nursery in New Jersey, having arrived as hitchhikers in a shipment of iris bulbs from Asia. They are the ultimate generalist herbivores, feeding on the leaves and fruits of about 300 different plant species, both woody and herbaceous. Pretty, though. 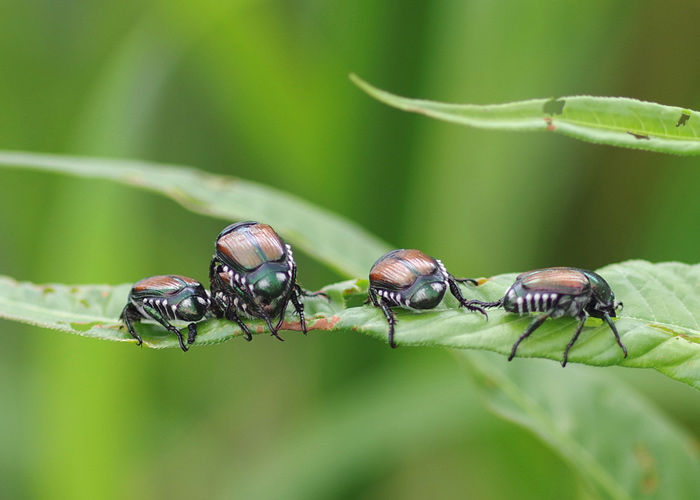 MAYFLY – The BugLady was photographing an ambush bug with its prey when she felt something land ever-so-lightly on her arm. If she’d have guessed before looking, she never would have guessed a mayfly. Mayflies are in the well-named order Ephemerata, and ephemeral they are. Their naiads live for a year under water, and when they emerge as adults, often in Biblical numbers, they are unequipped with mouthparts and live for only a few days. But it’s enough. 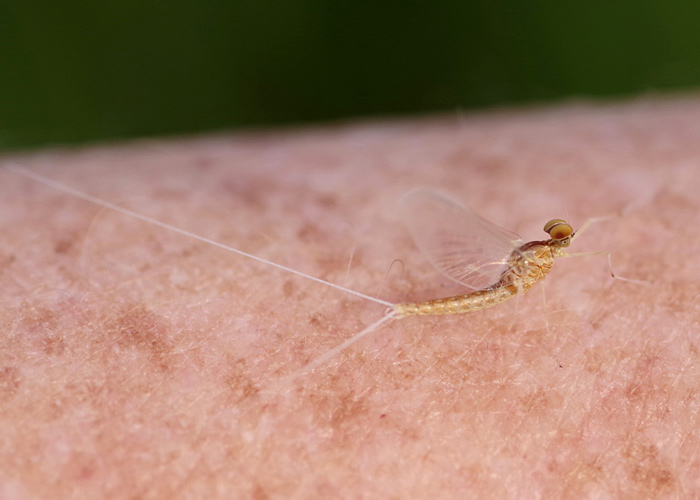 BLACK AND YELLOW ARGIOPE – The BugLady is thrilled to see good numbers of these spectacular orbweavers this year. They’re beautiful, and they’ve been hard to find lately. Orbweavers are with us all summer, mostly unobserved until late August, when they reach an impressive size. 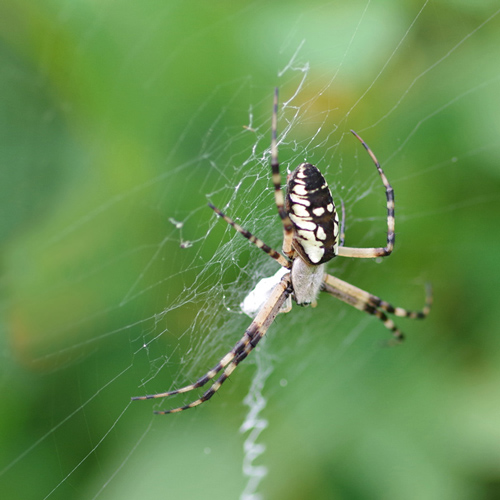 STINKBUG AND PREY – A (probably) Podisus maculiventris stinkbug nymph making a meal out of an alien Pine sawfly larva, on a porch rail; the duo probably dropped out of the White pine above. They’re known as Spined soldier bugs because of the adults’ pointy “shoulders”. Stinkbugs insert their mouthparts into their prey, pump in the meat tenderizer, wait a bit, and then suck out their prey’s softened innards. 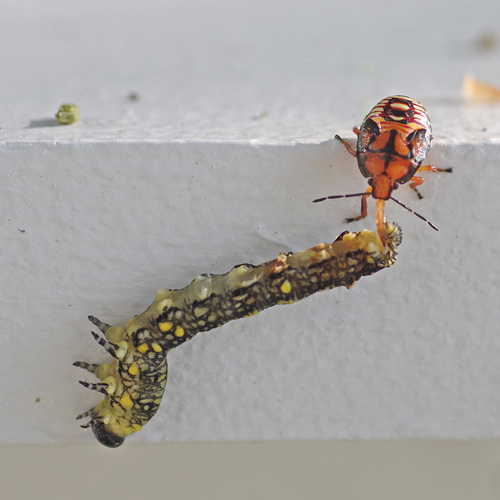 TIGER SWALLOWTAIL – The BugLady has a small flower garden at her new home, mostly populated by horticultural (“tame”) stuff that she’ll be replacing with native plants. She may make an exception for this lily, which was both hummingbird and butterfly-friendly. 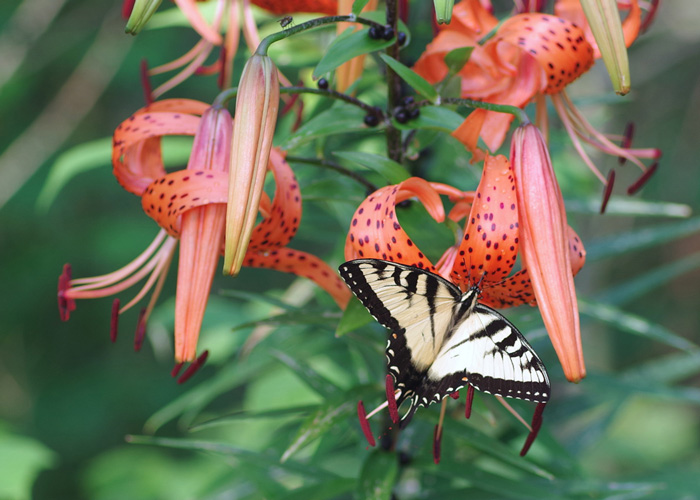 VICEROY and MONARCH – Telling a Monarch butterfly from a Viceroy is easy, once you know the secret handshake. Viceroys are a bit smaller, and (to the BugLady’s eyes) their flight is a bit peppier than a Monarch’s, but those traits are pretty subjective. The Viceroy is always held up as a Monarch mimic that cashes in on the fact that Monarchs are toxic because of their caterpillar’s food plant, and predators learn to avoid them. Viceroy caterpillar host plants are willow, aspen, and poplar, and some scientists believe that while they may not be toxic, they are probably distasteful, and the two species complement each other. Anyway, the Viceroy, on the left, has a C-shaped black line through the hind wing. 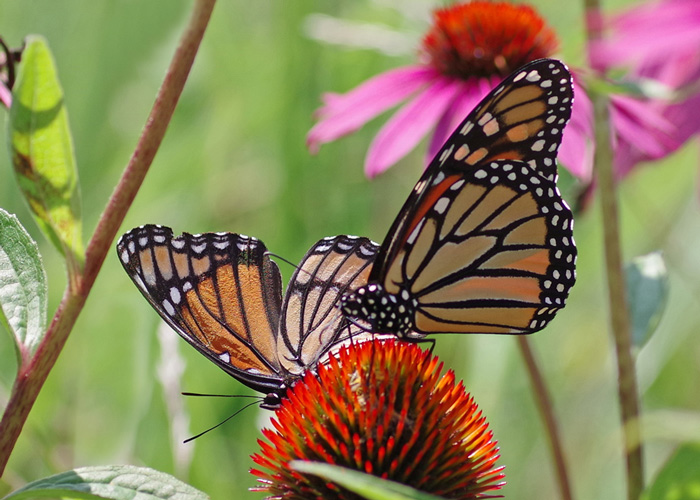 SYRPHID/HOVER/FLOWER FLIES – There have been astonishing numbers of these small, harmless, bee-mimicking flies in grasslands lately. Swallows, dragonflies, damselflies and other consumers must be living large on them. 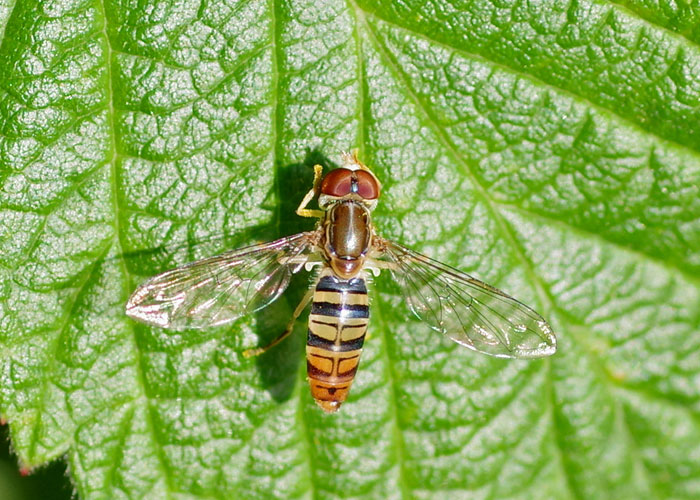 A MASS of MONARCHS – Monarchs migrate along the lakeshore, too. The BugLady found two groups with about 50 Monarchs apiece – early migrants – tucking themselves in for the night at the end of her driveway one afternoon in mid-August. 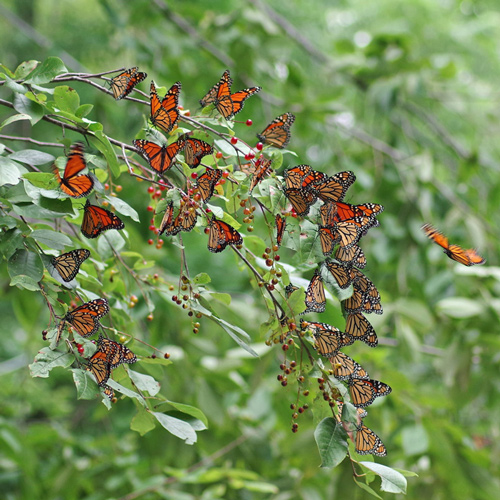 Go outside. Find a prairie. Look at bugs.