The BugLady took a walk on the first day of spring along a nearby dirt road. Automobile drivers are seldom happy with that road, but masses of millipedes, spiders, dragonflies, and butterflies enjoy its damp and dappled surface, and frogs, snakes, and other small animals cross from upland to lowland there. With Sandhill Cranes providing a sound track, the BugLady shared the road with a wolf spider, a six-spotted fishing spider and some small (but colorful) millipedes.

Millipedes, a.k.a rain worms, are fascinating critters—the BugLady wrote about them in the early days of BOTW (April, 2008)—see Millipedes 101). They seem to be in need of a good PR campaign, so here are the basics. They don’t bite. They’re not slimy. Most of them are not carnivores. Most of them shun living plants and feed on rotting organic material (many practice coprophagy, though). They don’t give us diseases. They don’t want to come inside for the winter. If your home experiences a Biblical scourge of millipedes (which are humidity-seekers) it could be a First Alert that your plumbing needs a look. See—all good! Yet, many millipede hits on-line are exterminators (you don’t need one, because your house is way too dry for millipede comfort and will kill them all by itself. Caulk the cracks to keep them out).

Millipedes are under the umbrella of the great phylum Arthropoda; along with centipedes and a few others, they’re in the subphylum Myriapoda (from myrias, the ancient Greek word for 10,000). They’re in the class Diplopoda (for taxonomic comparisons, Insecta and Arachnida are also classes). When you say “diplopod,” you’re also speaking Greek (diplos means double, and pous means foot). Millipedes (Latin for “thousand feet”) have two legs on each side of most segments (centipedes, also pictured here, have one on each side; for centipede info, see BOTW’s House Centipede). No actual 1000-leggers have been found, and the present record belongs to an individual with 750 legs. However many legs they have (and they have far more than any of the rest of us), those legs are short, and millipedes don’t disperse far or fast without help. 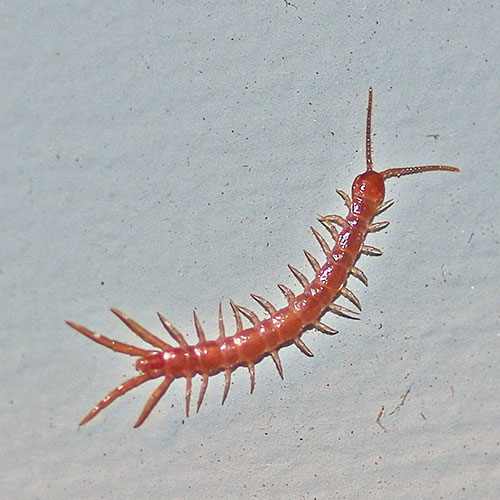 According to bugguide.net, there are 12,000 described species of diplopods worldwide, divided into two sub-classes, 16 orders, and 145 families, but there may be 70,000 more species out there waiting to be described! North America has just under 1,000 species in 52 families; bugguide.net illustrates members of 10 orders, including a few non-native species that have made it to our shores. They speculate that there could be hundreds of undescribed species in North America.

Millipedes come in a surprising variety of sizes, shapes and colors—from millipedes that could be mistaken for pillbugs

Some are bioluminescent, and there’s even a species in South America that has moss growing on it. The longest U.S. millipede is about 6 ¼” (also California, where they seem to be serious about their millipedes). For more eye candy, click your way through the orders and families.

They’ve been around for a long time—one of the first groups of animals to adapt to life on land 400 million years ago (in the days when oxygen levels were higher than they are now and therefore arthropods grew bigger—six-foot long millipedes). Millipedes, whose exoskeleton lacks a protective, waxy cuticle, like to stay undercover where the humidity is high—in leaf litter, rotting wood, and soil. Powered by all those legs, most are good diggers, though some very large and very small species don’t tunnel.

Millipedes are, figuratively speaking, exactly what one of their common names claims they are—“thousand-legged worms.” They are cylindrical (except when they’re flat), many-legged, worm-ish critters. Most have chewing mouthparts, simple eyes, and sensory organs on their antennae that help them detect light levels and possibly humidity. An enlarged segment behind the head is called the collum. Air passes through pores near the legs on each side of the body on its way into the tracheal system, and a millipede’s heart is as long as its body. Their legs are seven-jointed, and males have longer legs than females.

An alarmed millipede tends to roll up in a tight disc, curling hard shell around soft legs. Many also make bad-smelling or irritating defensive chemicals (including cyanide) (lemurs tease millipedes into expressing those chemicals and then rub the liquid on their fur to discourage mosquitoes). Some chemical defense is less passive—a few tropical millipedes can spray chemicals about 20 inches. Wash your hands, don’t rub your eyes.

In spring, a young millipede’s fancy turns to love. For most species, courtship is minimal. He may walk along her back to get her in the mood (different strokes), he uses modified legs toward the front of his abdomen to hold her as he inserts a spermatophore (sperm packet) into the operative opening, and they often embrace for a while afterward. She lays her eggs (a few hundred to a few thousand) in an underground nest she shapes from excreted dirt, and in some species, she dies soon afterwards. The young have six legs when they hatch and add more each time they molt. They grow and leave the nest, feeding on plant material and on the microorganisms their guts require to digest plant fibers. They may take a few years to mature and may live a few more years after that.

What ecosystem services do millipedes perform? As detritivores, they assist in the natural recycling process by making big pieces of organic material into smaller ones (for use by even smaller organisms). They are an important determiner of soil composition, and in areas where earthworms are scarce, they may fill the earthworm’s niche, capable of creating, according to a scientist named F. H. Colville, two tons of fertilizer per acre per year.

The BugLady has photographed a variety of millipedes in her neighborhood, but no one has ever accused her of being a Myriapodologist, so the following identities are “approximate.”

She has a color slide, but not a digital image, of Wisconsin’s largest species (up to 4”), the millipede formerly known as Spirobolus marginatus, now reclassified as part of the Narceus americanus-annularis species complex. It’s in the order Spirobolida and family Spirobolidae. She finds it around fallen logs on leafy forest floors. Interesting Narceus fact: the female lays a single egg in a cup formed from regurgitated food (bugguide.net). See for some nifty pictures.

The dark, curled-up millipede is Cylindroiulus caeruleocinctus (probably), in the order Julida and family Julidae. The experts say that North American members of the family Julidae all originated in Europe. 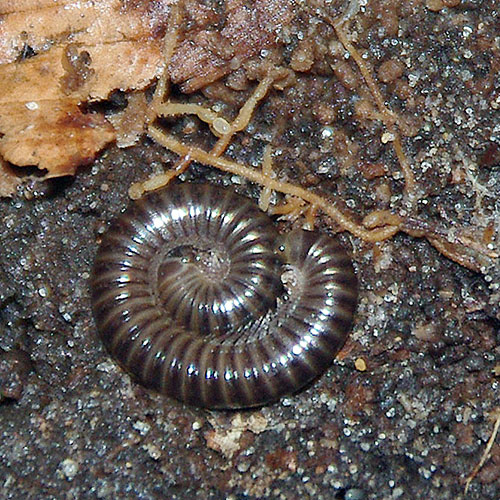 The cute little guy semi-coiled on the leaf is a tough one. The BugLady thinks it’s in the order Julida and the family Parajulidae, and possibly in the genus Ptyoiulus, but she wouldn’t bet the farm on it. These are native millipedes and bugguide says that Parajulidae is the dominant millipede family in North America, from Canada to Guatemala. You can really see the dome-shaped collum right behind the head. Some millipedes burrow by pushing the tough collum down through the soil. 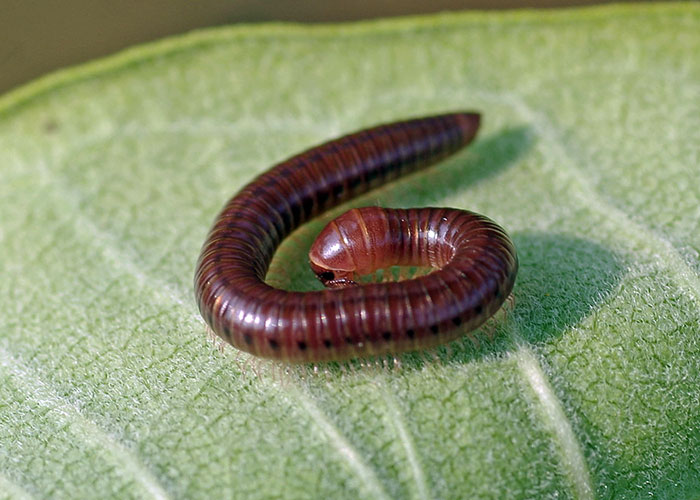 The very colorful millipede (burnished burgundy with purple bands) that shared the road with the BugLady looks like another Parajulid. 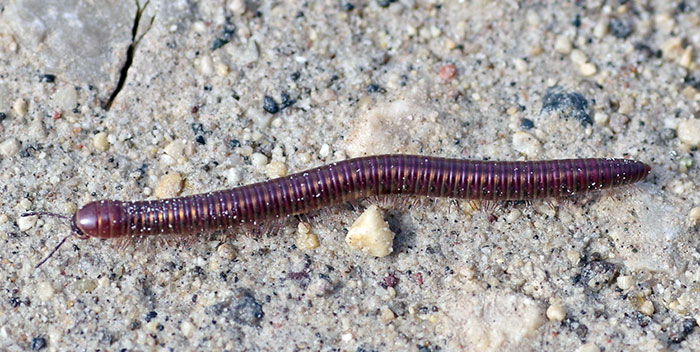 OK—the BugLady staged the shot of the millipede lying semi-curled on the green leaf with its feet up; it was on a stony parking lot and she thought it would be easier to photograph on a leaf. It’s a Flat-backed millipede in the order Polydesmida (the largest order of millipedes, all chemically defended), a Pleuroloma flavipes (flavipes means yellow foot), in the family Xystodesmidae (unless it’s Apheloria virginiensis). There are about 300 known species in the family, and a third of them live in the Appalachian Mountains (low mobility and geographic isolation make for some interesting species-rich regions). They are famous for “swarms,” which are sometimes migratory. 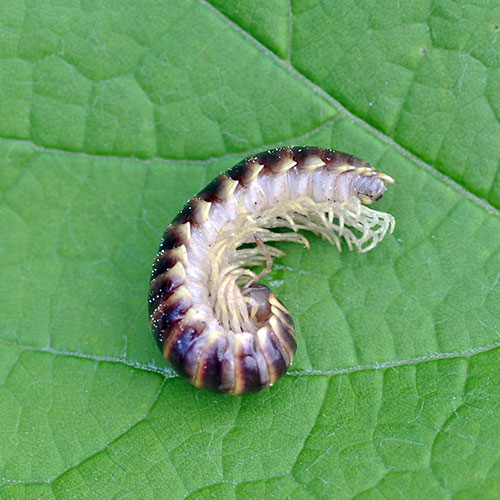 The small, pinkish millipede with square plates in its back is another Flat-backed millipede, but this one is a foreigner. The Greenhouse/ Hothouse/Short-flange millipede (Oxidus gracilis) hails from Asia but is well-established here. It is in the order Polydesmida and the family Paradoxosomatidae. It’s in reproductive mode all year. 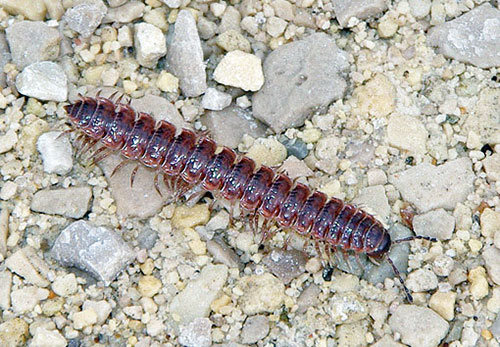 Why did the millipede cross the road? More precisely, why do they congregate on the BugLady’s front porch, and in her basement and garage? They assemble and move around in response to heavy rain and to cooling temperatures (the seal on the BugLady’s garage door is not millipede-proof, and scores came in out of the cold last fall). Reportedly, train tracks can become slippery with flattened millipedes.

Interesting millipede facts:
Some of the larger species are sold as pets;
Millipedes have been used in rituals, in folk medicine to treat fevers, hemorrhoids, wounds, and earache, among others, and to make poison-tipped arrows, but they are not part of many cuisines.

Common Green Darner, the Rest of the Story (Family Aeshnidae)