Monarchs, famously, migrate, but they are not the only insect that travels—snout, buckeye, painted lady and red admiral butterflies and a variety of large dragonflies like darners and saddlebags also migrate (watching dragonflies drift down the west shore of Lake Michigan on a soft, fall day can be mind-boggling). But, monarchs are the long-distance champs. 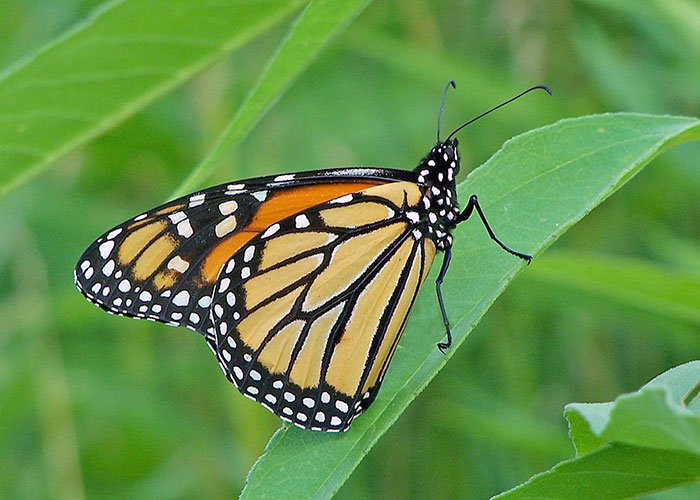 All the monarchs east of the Rockies overwinter on about 15 smallish sites in central Mexico, some 1500 miles from southeastern Wisconsin. Monarchs west of the Rockies overwinter along the coast of California, though a few overachievers do trans-Pacific jaunts to Hawaii (where they’ve established a beachhead) and even to Australia. Southern Texas and Florida boast non-migratory populations. There are several generations per year, but the monarchs that emerge here at the end of summer migrate to Mexico (and remember—when young birds migrate, it is usually with adult birds that have made the trip before. Not so with monarchs). In spring, that extra-long-lived generation (seven to eight months) which migrated south turns back north. They lay eggs as they go and their offspring and their offspring’s offspring follow the milkweed crop and eventually return to Wisconsin. Here, they may produce two more generations.

Putting all one’s eggs in the same basket, population-wise, is risky. In the winters of 1992 and 1995, there were snowstorms on the wintering grounds; some estimates were of greater than 60% mortality. As they headed north in the spring of 1996, an el Nino event brought heavy rains the southeastern part of the U.S. and more died, and for the next five years or more, monarch sightings were alarmingly infrequent. Scientists have discovered that to get to their destinations, monarchs navigate by the sun, using an internal clock that allows them to correct their compasses in response to the sun’s movements across the sky. Not only that, it lets monarchs in Michigan, Maine and Montana set correct (but different) flight plans for central Mexico.

That discovery raised as many questions as it answered, because it is only the final brood of summer that turns its compound eyes southward and embarks on The Big Trip. Further experiments suggest that day length helps “set” the monarch’s clock; at a specific number of daylight hours an internal clock is activated and a generation of migrators is produced. The changing tilt of the earth in late summer also plays a role; wherever they are, monarchs are cued to start moving when the sun recedes to around 57 degrees above their southern horizon. And all this is happening in a critter whose 3/16” long head contains a brain the size of a pin head. Wowsers!

Monarch caterpillars, like many other young people, are picky eaters. Though the adults get nectar from a variety of flowers, the females lay eggs only on milkweed species (how she identifies a milkweed without a field guide is another good story). Not on rank, old plants but only on plants that are producing tender, new leaves. Because monarch caterpillars feed only on milkweed, whose sap contains a cardiac glycoside, the caterpillars are poisonous (in fact, they concentrate glycosides, and caterpillar levels are higher than leaf levels). Pupae and adults are also poisonous. A bird has to eat one to get with the program, but one is enough to encourage avoidance thereafter. The presumably tasty (or, at least, non-poisonous) Viceroy butterfly (note the curved line running through the hind wing) cashes in on this avoidance by mimicking the Monarch. 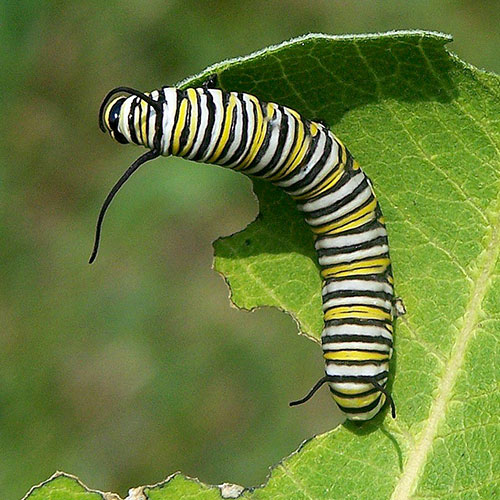 Monarchs grow from egg to adult in about one month, spending around four days in the egg, ten or twelve as a caterpillar, and twelve as a pupa in a glorious, pale-green, translucent case that allows voyeurs to observe the transformation (remind the BugLady to tell you about histoblasts sometime). Non-migratory adults live only a few weeks after they emerge.

Some people—but not people of Irish persuasion, or those who love them—call this butterfly “King Billy’ because orange and black were the colors of King William of Orange.

Included at no extra charge and in plain brown wrapper is an R-rated Bonus shot of big monarchs making little monarchs. 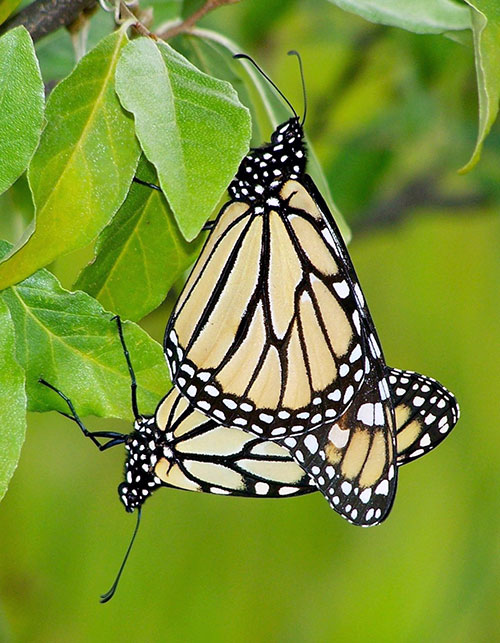 June 22 to 28 is National Pollinator Week. The BugLady trusts that everyone will celebrate appropriately.