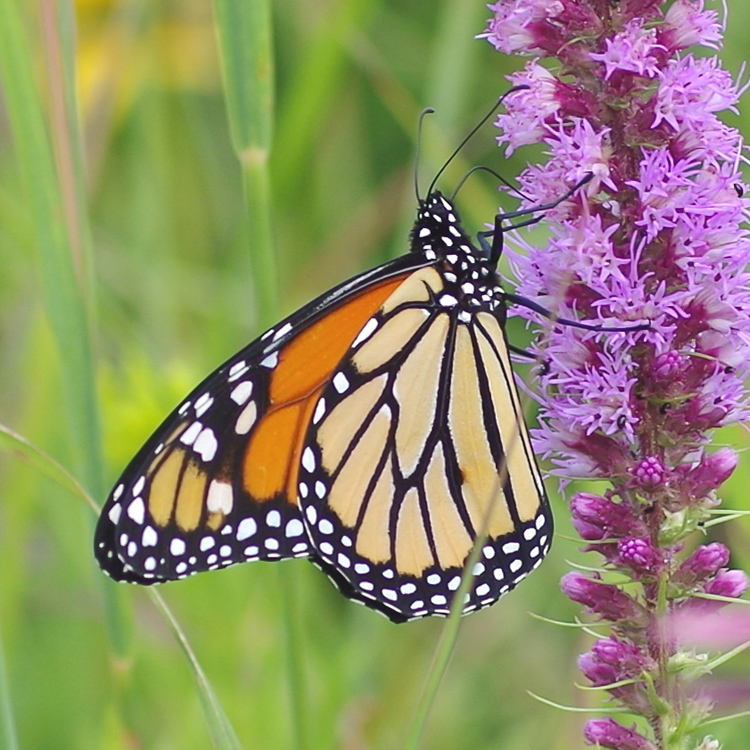 The BugLady saw her first monarch butterfly about 10 days ago, and today saw the first on her property.  Here’s a rerun from two years ago on the status of the monarch, with different pictures, and a few goodies at the end.  For up-to-date information, see https://monarchwatch.org/blog/category/monarch-population-status/.

It’s hard for us to wrap our minds around how populations of an organism that occurs by the millions (like the horseshoe crab, of recent BOTW fame) could be threatened.  And yet. 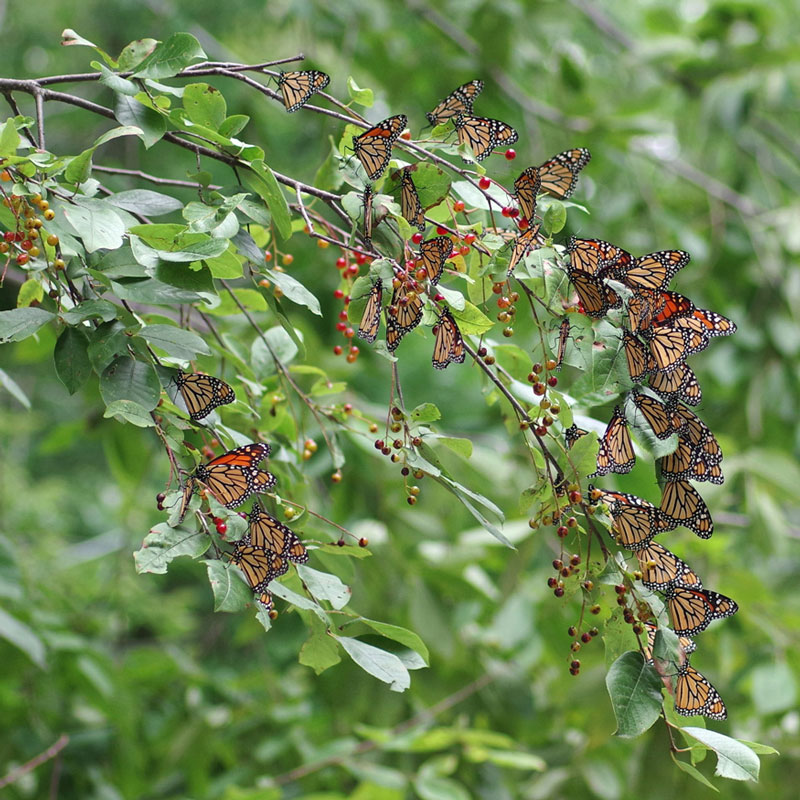 In the early 1990s, an estimated 400 million Monarch butterflies (by some accounts, 700 million) overwintered in the mountains west of Mexico City.  By 2010, that number had dropped, but it stabilized at around 100 million, though only 33 million were found in the winter of 2013-14.  This year’s population (winter of 2017-18) is estimated at 93 million; the biomass of Monarchs went, according to the Center for Biological Diversity, from covering 39 football fields to covering about one.  In the mid-1990’s, overwintering butterflies were found on about 44 mountainous acres; in 2013-14 on less than two acres; and this winter, on about 7.5 acres, down about 15% from last year. 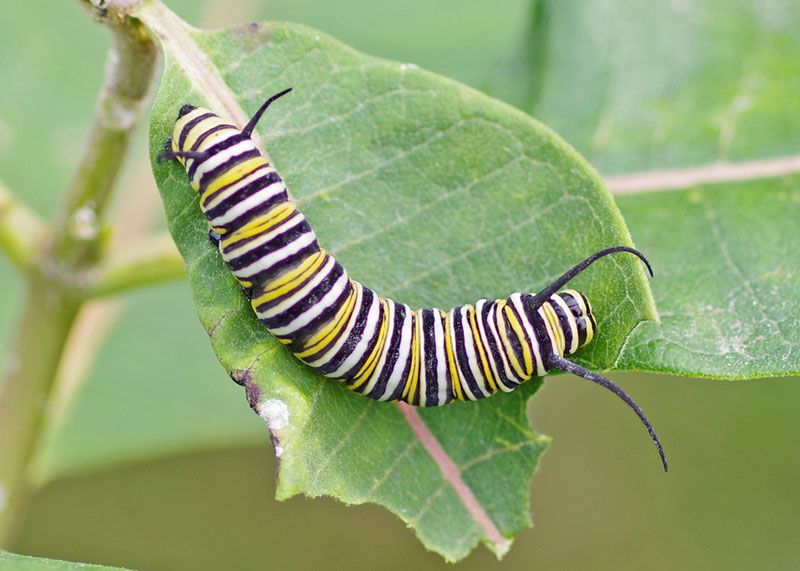 The “Eastern Monarchs” that winter in the oyamel fir forests represent the entire migratory population this side of the Rockies.  Pacific monarchs, whose numbers are also in steep decline, migrate along the coast to California, and there are non-migratory populations along the Gulf Coast, South Florida, and South Texas.

Still, 100 million butterflies is a lot of butterflies, right?  Not when you consider the impossibility of what they do, which is to undertake a 2,000-plus mile migration, spreading out from a pinpoint in Mexico to cover two-thirds of the continent.  Monarchs weigh about one-half of a gram each, which means that a Quarter pounder is equivalent to about 225 Monarchs (the BugLady was told there would be no math).  They face the physical dangers of a trip that takes them from as far north as Canada all the way to Central Mexico, where they spend months in resting mode before perking up in late winter and meandering north.  The same individuals that left Wisconsin begin the return trip, but their offspring’s offspring tag home here in May. 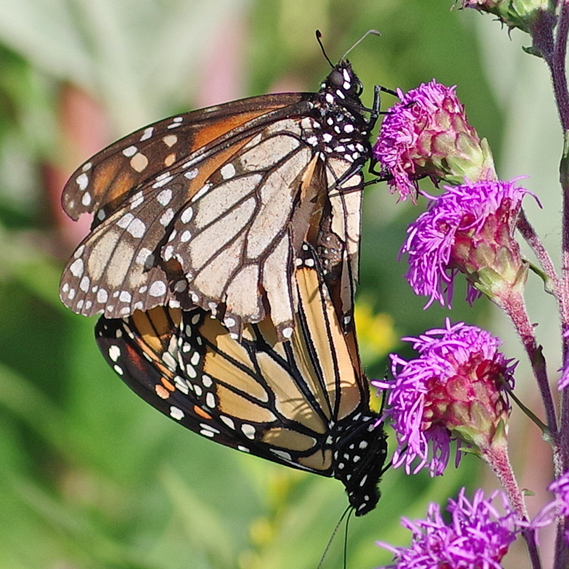 They face predators, cars, habitat loss, agricultural pesticides, and the shifting seasonal temperatures and increasingly severe weather events precipitated by Global Climate Change (aka Global Weirdness.  There were three hurricanes and two tropical storms at the start of the 2017 fall migration period http://monarchwatch.org/blog/2017/09/15/forgotten-victims-of-harvey-the-pollinators/).  The fall migration of 2017 along the Atlantic Coast was late, with some butterflies lingering into late October and even early November, lulled by unseasonably warm weather, the late migrants left susceptible to storms and freezes.  For a rundown on Monarch mortality factors, see “The State of the Monarch,” an August, 2015 BOTW, at http://uwm.edu/field-station/the-state-of-the-monarch/).  The only cushion against mortality factors like that is to maintain a huge population.

The US Fish and Wildlife Service tells us that “nearly a billion monarchs have vanished from the overwintering sites since 1990,” and according to a recent article in USA Today, “A 2016 study by the U.S. Geological Survey concluded that because of ongoing low population levels, there is an 11% to 57% risk that the eastern monarch migration could collapse within the next 20 years.”

Not on our watch! 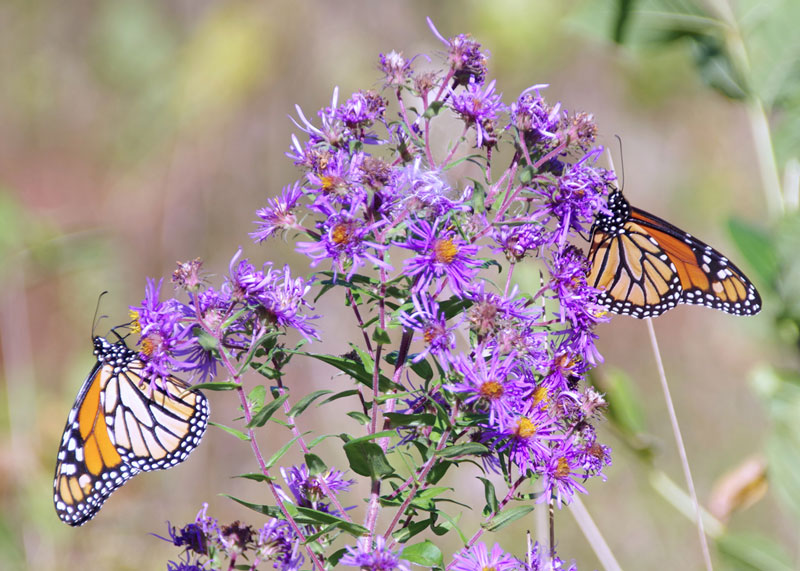 Milkweed has declined dramatically in agricultural areas in the Midwest, where the Monarch’s population strongholds are (the “Milkweed Limitation Hypothesis”).  Planting milkweed for caterpillars (and planting other nectar-bearing wildflowers for adults) as a part of grassland habitat restoration is a good start and it’s pretty and it can’t hurt.  Chip Taylor, of Monarch Watch, goes further, saying that “we need a comprehensive plan on how to manage the fragmented edges and marginal areas created by development and agriculture since it is these edges that support monarchs, many of our pollinators, and the many forms of wildlife that are sustained by the seeds, fruits, nuts, berries, and foliage that result from pollination.”  Late-blooming, nectar-bearing flowers fuel the fall migration and allow Monarchs to gain the fat reserves that will carry them through the winter.

Research strongly suggests that limiting the use of glyphosate pesticide use (and getting Climate Change turned around) hold out the greatest hope for Monarchs.  For two articles about recent studies, see https://academic.oup.com/bioscience/article/67/12/1080/4557606 and https://www.ncbi.nlm.nih.gov/pmc/articles/PMC5627118/ (there is math) 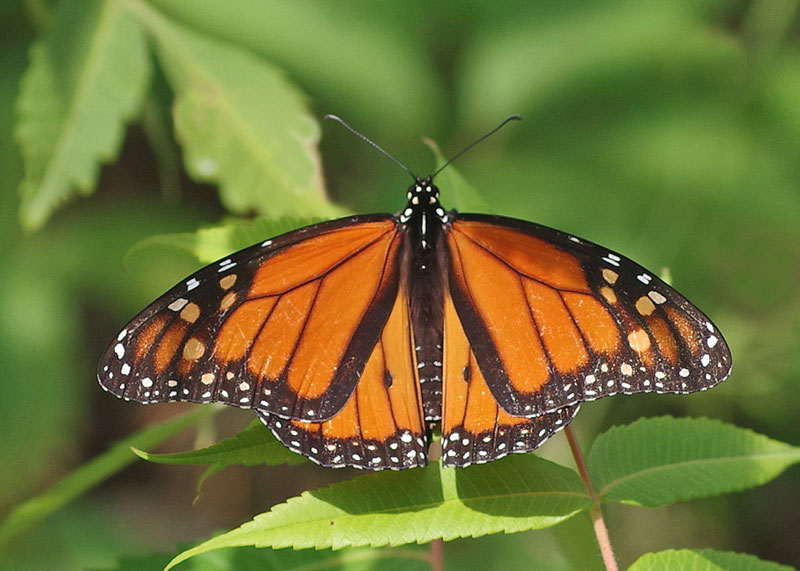 Finally, the Monarch is under consideration for Endangered Species protection, a decision that was to have been made by June, 2019 (https://www.fws.gov/savethemonarch/SSA.html).  It needs to be on that list so that legal protections will apply.  At the time this originally aired, the decision was expected within a few months, but the Fish and Wildlife Service extended their decision until the end of 2020 https://monarchjointventure.org/news-events/news/monarch-butterfly-esa-listing-decision-deadline-extended.

[Mildly political aside: And, of course, there needs to be an effective Endangered Species Act https://environment-review.yale.edu/biodiversity-brink-consequences-weakened-endangered-species-act.  Wonder what would happen if every school child drew pictures of Monarchs and sent them to their Congress-people and to the Fish and Wildlife Service?]

An animated map https://maps.journeynorth.org/map/?map=monarch-adult-first&year=2020 (the BugLady does love a good animated map);

And a magical flight with a hummingbird drone https://www.youtube.com/watch?v=lWOySU_hAz0