Some of the 11,000-plus species of moths that inhabit North America are pretty small, and as seasoned BugFans know, the BugLady loves photographing mini-bugs. Today’s moths live in a loose, non-taxonomic group called micromoths or microlepidoptera. They don’t share the kinds of physical characteristics that would place them in a distinct family of their own, like the Sphinx or Giant silk moths; it’s all about size—micromoths are described as having a wingspread less than 20mm (3/4”). One source defines them by default as any moth not presently placed with the macrolepidopterans. About three-quarters of moth families have “mini” members. Their small size makes them hard to examine, preserve, and classify (and therefore name), and it also keeps them from being embraced by the majority of moth enthusiasts.

They’re a diverse bunch. Lots of microlepidopterans are diurnal (though several of today’s moths appeared under the BugLady’s front porch light), and the larvae of many species specialize in a single or a limited number of host plant species (the group includes some plant and fiber pests). Many tunnel or mine in plant tissues or feed within leaves that they web together, though there are some scavengers and, surprisingly, some parasitoids and predators in the bunch.

Although they have their own microleps.org and a Facebook page, and they’re present on lists of museum collections and natural history surveys, there’s not a lot of information out there about their stories. As far as the BugLady is concerned, the microlepidoptera are the poster children for why field guides should show moths as they sit, rather than pinned with wings spread—these guys can be hard enough to ID in their natural posture (the BugLady typically finds their IDs by accident).

The Orange-Headed Monopis (Monopis spilotella), in the moth family Tineidae (not Tineidae, the contemporary music producer) can be found across northern Europe, Russia, and North America. Tineidae is commonly called the Clothes Moth family, though many of its members never see the inside of a closet, and they are also known as Tineid or Fungus moths. As their name suggests, the larvae of some species of Tineids eat fabrics like carpets and clothing, but wild family members may feed on feathers and keratin, which they get from the horns, hooves and shells of dead animals. The Peterson Moth Guide lists its larval hosts as “unknown.” 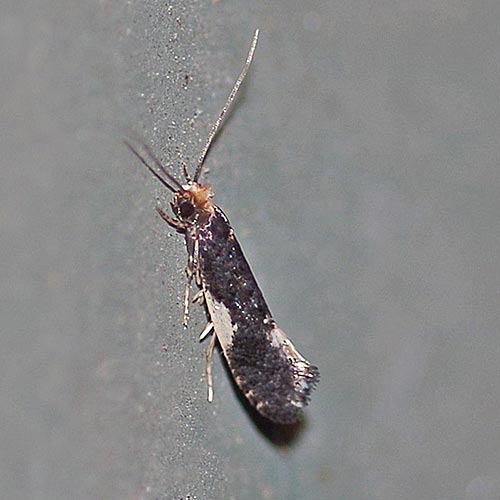 While some micromoths have no common name, the Speckled Xylesthia or Plum Branch Xylesthia or Clemens Bark Moth (Xylesthia pruniramiella), has an embarrassment of them. This half-inch moth, another member of the Tineidae, is decorated with lumps that are made of raised scales, and it has a great face. It occupies the U.S. east of a line from Texas to North Dakota (it’s also found in the Galapagos Islands!), and its larval food is “woody excrescences found on the branches of the plum tree.” It has a long flight period or multiple generations per year—a North Dakota site reports them from February to December. 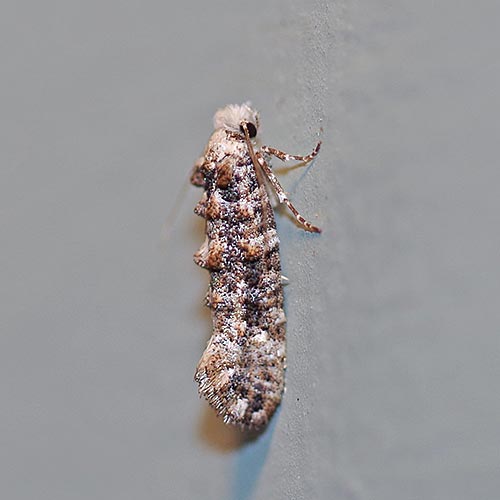 This Bidens Borer Moth (Epiblema otiosana) had quite a trek from the nearest Tickseed Sunflower or Bur Marigold to the BugLady’s front door. Amaranth (Goosefoot), Chenopodium (Lamb’s quarters) and Ambrosia (ragweed) are listed by some as alternate hosts, and the BugLady does have those, but some authors say that a larva ends up in a non-Bidens stem only after starting out in a Bidens stem. The pupa overwinters in plant stems. 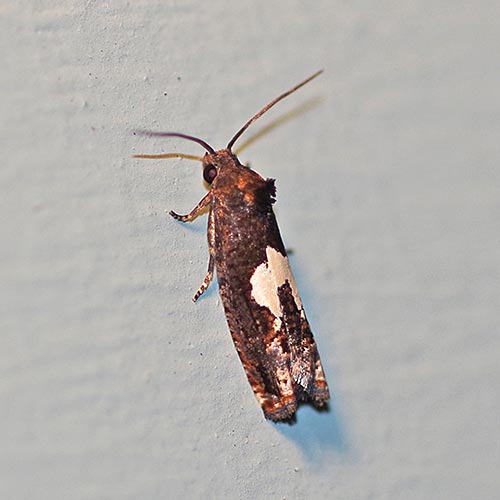 The Bidens Borer is in the family Tortricidae, or Leafroller moths. It is found in damp areas/wetlands/wetland edges North America east of the Rockies. It’s listed in older references as a biological control for Bidens (which the BugLady didn’t realize needed controlling) and as an important reservoir for a number of parasites of agricultural pests, including the Oriental fruit moth.

The larvae of Epiblema scudderiana, or the Goldenrod Gall Moth, make a gall in the stems of a variety of goldenrod species in open areas in eastern North America. It has, famously, been studied in connection with the cold-hardiness of the larva (lots of papers on line about its “glycerol biosynthesis”), which is important because like the Bidens borer, it acts as winter host of (according to bugguide.net) 11 parasitic wasps and one tachinid fly that attack pest insects in summer. The adult rests with its wings rolled like a cigar. 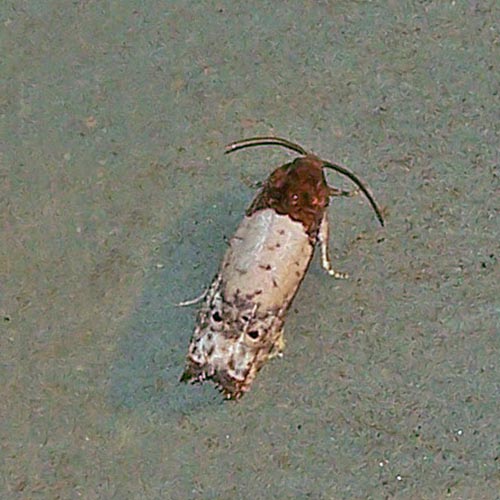 The Cream-Edged/Cream Bordered Dichomeris (Dichomeris flavocostella) (flavocostella = yellow rib) is in the family Gelechiidae, a.k.a the Twirler moths (the BugLady could not determine what “twirler” is all about). Gelechiilidae, like Tineidae, includes lots of species that compete with us for food, but the caterpillars of the Cream-edged Dichomeris bind together the leaves of goldenrods and asters with silk and feed, sheltered, within. They’re found east of the Rockies. 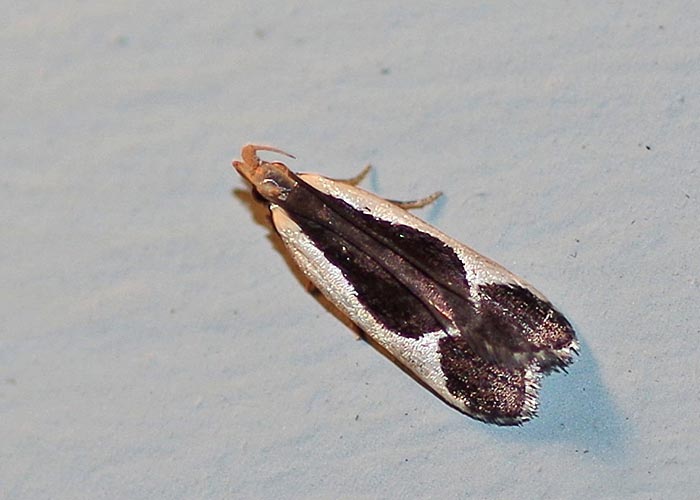 And finally (until the BugLady stumbles across more IDs), we have the Four-O-Clock Moth (Heliodines ((a.k.a. Neoheliodines) nyctaginella), in the Sun moth family Heliodinidae. The BugLady came by this ID sideways. She found a picture of Linnaeus’s Spangle-wing (moth namers have so much fun) that looked pretty good and she had photographed her very spiffy moth not far from the Spangle-wing’s larval food tree, Linden. But, her moth was a lot fancier—more silver spots. Since she photographed it on a Wild Four-o-clock plant (Mirabilis nyctaginea) (note please the tie-in between the moth’s species name, nyctaginella, and the plant’s), she decided to check the awesome Illinois Wildflower site, whose species write-ups include faunal associations, and there it was. A very similar moth, right down to its pale antennae-tips, that not only is in a different genus, it’s in a completely different moth family. The larvae feed on buds and leaves, causing the stressed plants to produce fewer seeds. 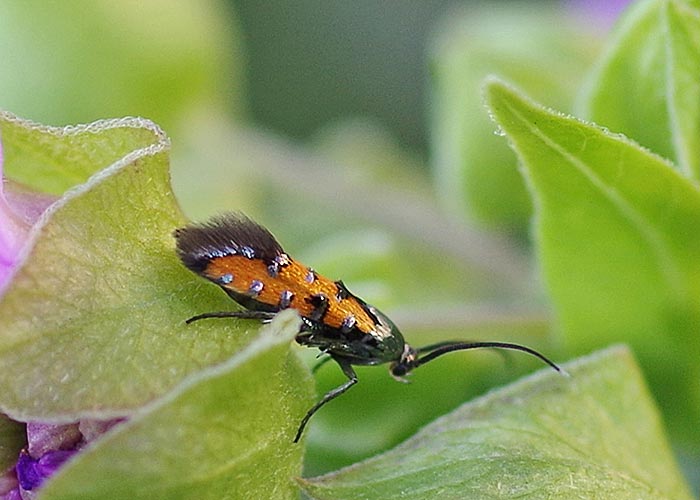 The Four-o’clock moth is in the family Elachistidae, the Grass Miner moths; the larvae of many species burrow in grass leaves and/or stems). According to bugguide.net, the Greek elachista means very small.