When the BugLady is leading kids on outdoor walks and wants to challenge them to do a little creative thinking, she points out a “Natural History Mystery” for them to puzzle on (like, Do you think that fungus grew on the tree before or after the tree fell over?). Today’s episode is a Natural History Mystery.

For the past few years, the BugLady has been monitoring an odd development among a patch of common milkweeds (Aesclepias syrica) along her driveway. Two years ago a few sickly milkweeds sprouted among the healthy ones. There were more diseased plants last summer, and this year the proportion has increased to approximately half of the milkweeds in a fairly dense patch about 10’x 4’. The odd-ball milkweeds emerge with thin, chartreuse, somewhat puckered leaves whose veins are a darker green. Equally peculiar is the fact that they send up stems from the leaf axils in the upper half of the plant, giving the top of the plant a bushy look. They don’t produce flowers/pods. This year, a number of the milkweeds that started growing normally developed the disease later, and while their lower leaves stayed OK, their upper leaves changed color/shriveled a bit, and sent up the characteristic extra stems. If they had flowered, their pods were greatly reduced. The diseased plants die early, looking charred. 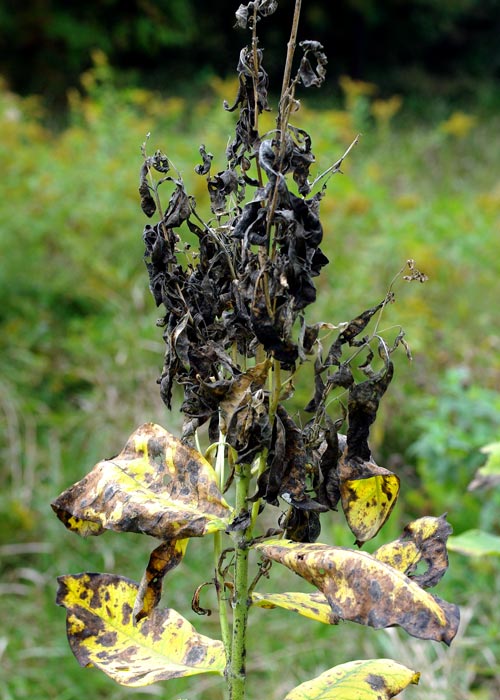 The BugLady did an internet search to try to find out what the problem was, but as a researcher, the BugLady admits to being severely “key-word challenged.” “Your Search Did Not Match Any documents” pops up all too frequently. The disease looks like a virus, and while she couldn’t find a specific milkweed virus, milkweeds do host a number of viruses of vegetable crops like cucumbers. 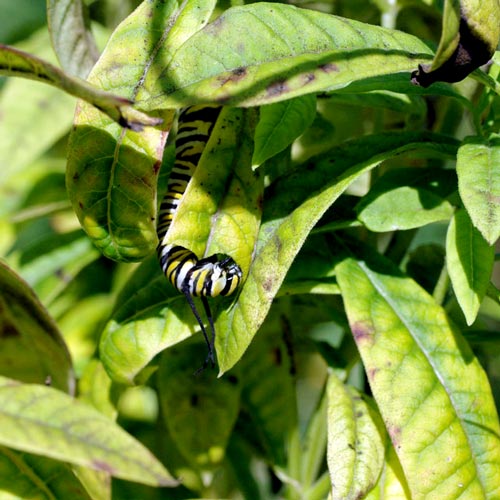 Where’s the Bugs? Well, when monarch butterflies lay eggs, they lay eggs only on plants that are producing tender, new leaves, and boy, were these plants ever producing new, tender leaves! Ms. Monarch, who does not carry with her a tiny Field Guide to the Wildflowers, determines where to lay her eggs (and where to simply tarry) by scratching a leaf with the rough surface on the bottom of her tarsi (feet). Using chemical sensors in her long proboscis or in the tarsi themselves, she can identify the correct larval food plants.

So, the patch of mangy milkweeds were monarch magnets! And the BugLady, who plays Mother Nature from time to time, worried about the effects on monarch caterpillars of feeding on such obviously (to her, anyway) un-wholesome food. So she started transplanting the young ‘uns onto her lawn milkweeds (it’s the custom here to mow around any milkweed that volunteers on the lawn, and it’s possible that the mowing crew seeds milkweed stealthily). Generation 4 (the 4th removed from the Mexican mountains) were prolific, and toward the end of August, the BugLady was moving five or six generation 5 caterpillars to greener pastures daily (Gen-5 are the ones that migrate). She has no idea whether the caterpillars benefited from the move (although she felt much better…), but between mid-August to mid-September the total airlifted was more than 40. 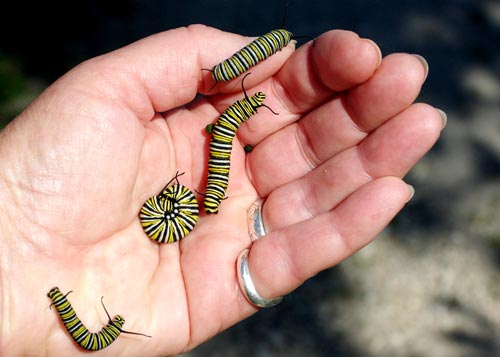 Next year, the BugLady will cut down the diseased plants as soon as they emerge in order to limit the spread to the rest of the milkweed population. It will be interesting to see if the caterpillars carried the virus to their “foster” milkweeds.

The Milkweed Mystery caused a bit of a stir among BugFans. Several BugFans gave the BugLady “atta-boys” for moving the caterpillars. Two BugFans reported similarly diseased milkweeds, one about 6 miles from the BugLady’s house, and the other about 15 miles away. BugFan Mike found a probable solution less than 12 hours after the episode was posted (and most of that was overnight—way to make the BugLady look bad, Mike). Anyway, he pointed the BugLady in the direction of an aphid-borne virus called “Yellow Virus” (in the spirit of the BugLady’s usual research results, “yellow virus” is, of course, a name that also applies to yellow fever and to a computer virus that affects Super Mario and several other video games. Not, as yet, the name of a Heavy Metal band). 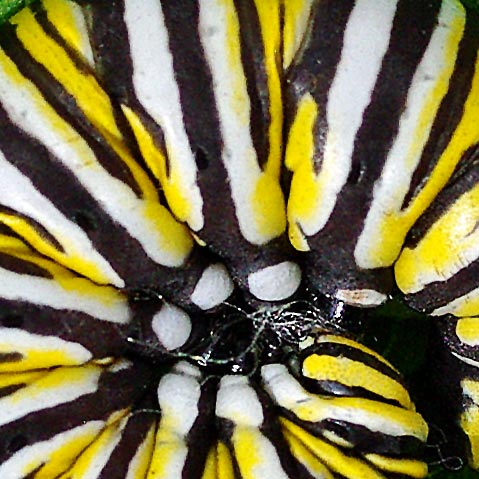 A variety of cultivated crops, like tomatoes, potatoes, a few grains, mustards, and squash, host these yellow viruses, and the photo of leaves of infected tomato plants were very similar to the afflicted milkweed leaves. None of the (scantily-illustrated) articles mentioned the extra branching that the BugLady sees on her milkweeds. The BugLady doesn’t live among truck farmers; her dairy-farmer neighbors grow soybeans, corn and alfalfa. Most vegetable crops are annuals, and the milkweed is a perennial, so it will be interesting to see if previously-healthy plants that hosted the caterpillar Diaspora will be healthy in 2011. The plot thickens.