Milkweeds and goldenrods are famous for being hosts to a tremendous variety of insects and other arthropods that come to eat or be eaten. Both adult and immature insects that eat milkweed at some part of their life cycle are poisonous to their predators because of the toxic cardiac glycosides contained in milkweed sap. The BugLady read of one study in which, after captive Blue jays were fed monarch caterpillars, they threw themselves against the sides of the cage to avoid the next batch of caterpillars that was put into the cage. Here are a few milkweed critters; there are also some pretty spiffy weevils that like milkweed, and it is a cafeteria for many grasshoppers, plant bugs, butterflies, ants, wasps and even small frogs.

Red milkweed beetles (Tetraopes sp.) are members of the long-horned beetle family Cerambicidae, a spectacular group of beetles that can be both colorful and large and that bear long (sometimes very long) antennae. Typically, the adults are plant-eaters (wood, leaves, pollen, flowers) and their grubs feed on wood. This group mainly chows down on common milkweed; its grubs feed on stems and roots of milkweed, and they overwinter within the stem. Their nickname—four-eyed beetles—is the result of the socket of the antennae being located in the center of the eyes, “dividing” them in two. There are 13 species in this genus north of Mexico; the markings on the New Jersey milkweed beetle are quite different than those of its Wisconsin cousin.

(Swamp) Milkweed Leaf Beetles (Labidomera clivicollis) browse on the leaves and sometimes on the flowers of milkweeds, and they do not, obviously, restrict their presence to swamp milkweeds (some books just drop the word “Swamp”). They overwinter deep in the fuzzy basal rosettes of mullein plants. According to Kaufman and Eaton in the excellent Field Guide to Insects of North America, the adult beetles will sever the veins of a milkweed leaf to let the sap run out before feeding. 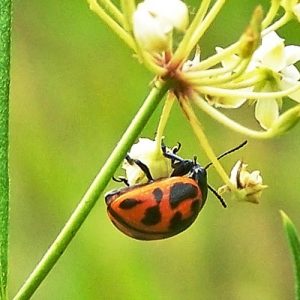 Milkweed bugs are in the Seed Bug bunch (family Lygaedidae), who get their name because they suck plant juice from seeds (alternatively, the sap from grasses). Pictured are the Small (Lygaeus sp.) and the Large (Oncopeltus sp.) Milkweed Bugs. Eggs are laid on milkweeds in spring, nymphs spend the summer on milkweeds, adults overwinter, and Large Milkweed bugs may hike around on mild winter days. The Small Milkweed bug is burrowing into a pod to eat the developing seeds. They are in the Scentless Plant Bug bunch; most true bugs have scent glands, but these don’t. 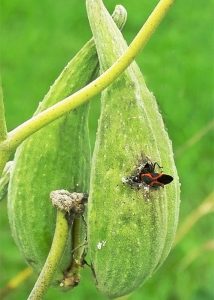 Monarch caterpillars feed only on milkweed leaves, but the adults nectar from a variety of flowers. There are many generations per year, but those that emerge at the end of summer (called generation 5) migrate south, where all the monarchs east of the Rockies overwinter on the same mountainside in Mexico. In spring, the same generation that migrated south starts north. They lay eggs as they go and the new generations are the ones that return to Wisconsin. Eggs are laid singly on the undersides of milkweed leaves, and impossibly tiny caterpillars hatch a few days later. The mid-summer generations may have a total life span of about a month. 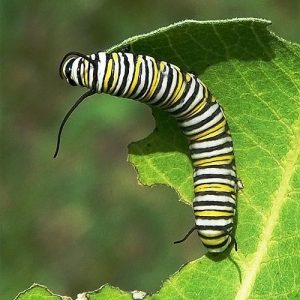 Milkweed Tussock moths are the second common milkweed caterpillar. Their color combination gave them their other name—Harlequin caterpillars. Harlequin. The Clown. It’s in the dictionary—look it up. Females lay eggs in clusters, and the caterpillars stay in groups during the first part of their caterpillar-hood. They may defoliate a plant, but they don’t really compete with monarch caterpillars. Monarchs tend to be found on newer, still-growing vegetation, and Harlequins like older plants. The adults are anonymous-looking silvery-white moths with ragged wing edges. 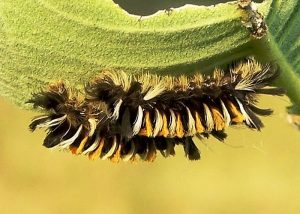 Have you hugged a milkweed today?