Because milkweed pods are crowded with Milkweed bugs in these (gulp) waning days of summer, the BugLady has spruced up this BOTW from five years ago with some new facts and photos. OK—so writhing masses of shiny, red nymphs give some people the willies—but they’re still striking insects, especially in contrast to the pale green milkweed pods they’re sitting on. Milkweed bugs come in two flavors—Large MBs (Oncopeltus fasciatus) (¾”) and Small MBs (Lygaeus kalmii) (½”). MBs of one kind or another are found on milkweeds across the U.S. and into southern Canada, and they’re most common in the Southeast.

Most of what the BugLady has been seeing this year have been LMBs. Both species have red bodies and black wing tips; LMBs have a black diamond-ish shape on the thorax, a broad, black belt across their backs, and a jagged, red “mask” on their faces. Male LMBs have two, thick stripes across the underside of their abdomen; females have a single stripe and two black dots. SMBs have an incomplete black belt, and a black heart inside a red “X” on their backs. The very similar False milkweed bug (Lygaeus turcicus), with two, piggyback black hearts within a red, “X” feeds on composites and undoubtedly, some reports of SMBs on non-milkweed species are of FMBs. 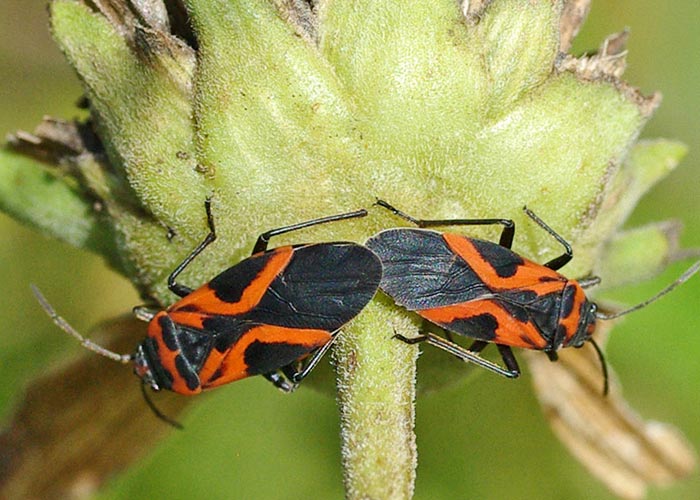 Milkweed bugs are in the Seed Bug family Lygaedidae, the members of which, not surprisingly, suck juice from seeds. MBs are True Bugs, in the order Hemiptera (“half-wings”), and that means that you get to call them “bugs” without being set upon by entomologists. Their metamorphosis is termed “simple” or “incomplete” because they hatch looking like mini-adults, growing in size and adding wings as they molt (MBs molt five times). Rather than having a resting/changing/pupal stage, they simply step out of their final nymphal skin as adults.

It’s been speculated that the Ancestor Hemipteran had chewing mouthparts, but today’s Hemipterans have strayed rather far from that early model. An MBs’ mouthparts consist of two, side-by-side tubes; one is used to pump digestive enzymes into the tough milkweed seeds and the other to siphon up the softened plant material (pretty slick, if you ask the BugLady). Between feedings, the tubes are held out of the way against the underside of the body. If you look closely under the “chin” of the MB profiled on the pod, you can see the mouthparts tucked between its front legs.

Unlike most insects, MBs are gregarious, and milkweed leaves and stems, as well as the more nutritious buds and pods, may be covered with adults and nymphs. One reference theorized that everybody benefits from communal feeding behavior. More feeding tubes = more saliva = more softening = more food. One study showed that ninety percent of LMBs are found in groups of at least three and as many as 30. During population booms, milkweed seed production suffers; the inner seeds are safe, but the whole pod seems dysfunctional. Most sources say that MBs have no economic importance, since they don’t attack crops, carry disease, or otherwise cross paths with humans, but people who raise milkweeds or collect seed are not fans. With one small caveat, MBs don’t compete with monarchs.

Milkweed bugs are reported to sip nectar and to feed on non-milkweed species when milkweeds are scarce; SMBs are known to eat insects that they find on milkweeds, including the occasional monarch caterpillar (there’s that caveat).

MBs have several ways to protect themselves from predators. If you get too close to a group, the individuals will scatter. When alarmed, MBs drop off the plant into the thicket of grasses at its base. They lie still on the ground for a while before resuming their eating—predators prefer to kill their own food and generally won’t bother an animal that is already “dead.”

These behavioral methods are really moot, because MBs, as their red and black aposematic (warning) coloration suggests, are poisonous due to cardiac glycosides in the milkweed they eat. Insects that make use of milkweed carbs must either produce chemicals to detoxify them or structures to sequester the toxins. MBs sequester. At the very least, eating a bunch of bad-tasting MBs will cause a predator to vomit and to develop a strong avoidance reaction to the next MB it lays eyes on (one on-line source warned readers not to let their dogs eat MBs). The MBs’ habit of feeding in the open in large groups magnifies those colors for near-sighted predators, and there’s some speculation that the equally-gregarious but non-poisonous box elder bugs are milkweed bug mimics.

With one major exception, SMBs and LMBS have very similar life stories. MBs mate (an act that takes about 30 minutes in warm weather and as long as 10 hours in cool weather) and lay eggs within a week of reaching adulthood, and females lay as many as 2000 eggs, about 30 at a time. Females incorporate some of those glycosides into the shells of their eggs (research shows that Mom’s toxins are more important to the eggs than Dad’s); this doesn’t completely insure an egg’s survival but it gives eggs on the inside of a cluster a better chance against a predator that starts nibbling on the outside of an egg mass. The eggs change color, from pale yellow to almost-red as hatching nears. It takes a month or two for a newly-hatched nymph to grow to an adult, depending on the air temperature, but fewer than 25% will make it. The nymphs start out solid red-orange, adding some black markings each time they molt, and older adults are dark red.

The big difference between SMBs and LMBs is that SMBs are permanent residents that overwinter as adults here in God’s Country, and the less hardy LMBs are migratory, following the milkweed crop north in summer and retreating south in fall. According to Stokes in Observing Insect Lives, about a quarter of LMB adults are migratory. Hormones stimulated by crowded milkweed pods and decreasing northern day lengths switch off the LMB’s reproductive activity and send them south (to resume reproduction there), and those that linger, freeze. SMBs crank out the antifreeze and survive northern winters, and on warm winter days down South, may stretch their legs.

LMBs are available from scientific supply catalogs, along with complete rearing instructions (they’ll eat sunflower seeds and watermelon in captivity) and they are reported to be “easy to dissect.”

Where the Lizard and the Antelope (Beetles) Play